Posted on November 6th, 2008 by Richard Earls in Outposts

This is an island with no traffic lights, no shopping malls and plenty of peace and quiet. Lanai is the smallest and perhaps least known of the Hawaiian islands, “Hawaii’s Most Enticing Island.” From 1922 to 1992, the island was given over to the cultivation of pineapples, owned by the parent corporation of the Dole Pineapple company. Now, however, Lanai is gently easing into tourism with upscale resorts like the Four Seasons Resort Lanai at Manele Bay or the Lodge at Koele, also under Four Seasons Management. The Hotel Lanai provides the island’s third and only other lodging. Visitors can fly in 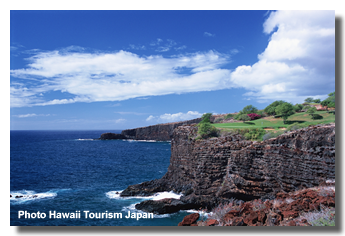 from Honolulu, though many arrive by ferry service from Lanhaina on Maui. A scant 3,000 people live on the island and there are only 30 miles of paved roads. Its location means that the island receives less rainfall than the other islands.

Do you want to talk nightlife? If so, you may want to stay on Maui or Oahu! Lanai is secluded, quiet and tranquil. Bill Gates chose the island for his 1994 wedding, using the island’s solitude as the basis for his very private occasion. Now, of course, the island boasts not one but two championship 18-hole golf courses designed by Jack Nicklaus and Greg Norman. But this is still Hawaii as it used to be. There is a comfortable scale to the buildings and the people are friendly. Lanai City is a quaint village town with colorful homes and buildings and the tall Norfolk Island pines characteristic of the island. Artist galleries and low-key retail line the streets along with lovely Dole Park. Lanai City sits nearly 1,700 feet above sea level, but even this slight change in altitude makes for a difference in temperature from the surrounding beaches.

One of the key attractions on Lanai is its outdoor life. Hiking the eight mile Monro Trail to Lanai Hale, the island’s dormant volcano, provides striking cross-water views of Maui, Moloki and the other islands. Deep 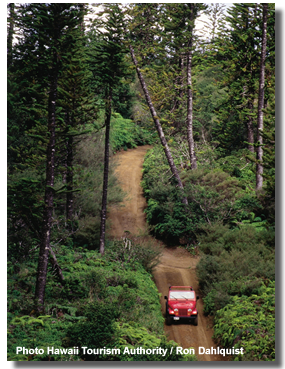 ravines score the landscape. Visitors can spot deer in the hills and the landscape changes as you cross the island from a desert-like surface to the deep forests of the hills. In fact, the heavily forested north eastern shore could not be more different from the rugged southern coast of the island, a striking contrast on such a small island of only 144 square miles.

Renting a Jeep Wrangler and self-touring the island is easy. The roads vary in condition from paved to pot-holed, so the going is relaxed and slow. The “Garden of the Gods” a desert-like moonscape is a multi-colored volcanic region of the island. Just a bit further is the Kanepuu Preserve, with almost 50 native species of plants, many endangered. Polihua Beach is worth visiting, a two-mile white sand beach on the northeast shore. Shipwreck Beach is just a bit further on, its black sand lined with trees where off-shore the beached hull of a World War II battleship rusts away. Kaunolu Village is an archaeological site where Kamehameha I once made his summer home. Kahekili’s Leap, a 60 foot cliff is nearby, where Hawaiian warriors once dove to prove their manhood. 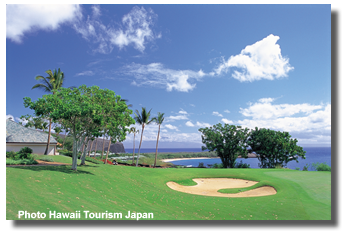 will find the Luahiwa Petroglyphs, ancient Hawaiian carvings on fragile rock. You can reach the area by Jeep and, like most attractions on Lanai, it’s free.

As one drives between these points, it is in some seasons entirely possible to not encounter another soul. This is an island where you won’t see tour buses or wait behind dozens of others to see an attraction. Lanai is an open island where visitors do well to explore on their own. Are you getting the picture? Lanai is your own, nearly private island. This is the tranquil Hawaii, a place to find solitude and peace in your own, private, American paradise!

Your use of this article is sponsored and made possible by Blue Sky Tours, with more air contracts to Hawaii than any other wholesaler. Click on the banner below to see 2008 pricing that are less than 2007 pricing!

Posted in Outposts | No Comments »
Tagged With:   hawaii

Share your thoughts on “Lanai: Your Private, Tranquil Hawaii”