Posted on January 22nd, 2010 by Richard Earls in Outposts

The Europeans know Argentina – it has been one of their playgrounds for decades. Travel and tourism accounts for better than 10% of the GDP of Argentina, and it holds real bargains for the North American traveler. Unfortunately for the populations of Canada and the United States, however, until recently Argentina has been too little visited and known as a destination. The vast country’s varied landscapes and regions cannot be taken in on a single visit. Travelers do well to see Argentina over a succession of trips, but it is often necessary to try to cover much territory in a single visit. This brief introduction to the regions of Argentina will be all too short and brief. But that hardly matters. The only way to believe is to see for yourself.

Argentina is the world’s eighth-largest country and the second largest country in South America. The nation’s geo-political boundaries are the continental area between the Andes mountain range to the west and the Atlantic Ocean. Argentina claims the Falkland Islands (as do, you may remember, the British) and South Georgia and the South Sandwich Islands as well as a part of Antarctica just off their southern border.

The climate is  ranges from subtropical in the north to subpolar in the region known as the “deep south”. Northern Argentina is can be very hot, with very humid summers and mild winters. Central regions of the nation experience typically hot summers and cool winters. As one moves further south, warm summers and cold winters with moderate to heavy snowfall are the norm. The higher elevations of the Andes experience cooler conditions year-round.

Argentina’s culture has strong European influences. People of European descent layered on top of the indigenous population and adopted an almost self-conscious awareness of European architecture and style. Spanish is the official language, but in outlying regions native dialects are common. But it is in Argentina’s food, music and dance that that the truly authentic character of the country is best displayed. Think tango.

The distance from Argentina’s northern tip to Tierra del Fuego in the south runs 2,264 miles. The nation is bordered in the north by Bolivia, Paraguay, Brazil, and Uruguay. The Andes run the country’s western border with Chile. The flat grasslands of Las Pampas and the waterfalls and subtropical jungle of Iguazú reflect the geographic diversity of Argentina. Typical itineraries will involve a trip to the nation’s capital, Buenos Aires and then a visit to the lake district, the Mendoza Wine Region, Iguazú Falls in the northeast or Patagonia or Tiera del Fuego in the southernmost reaches.

Buenos Aires is where most visitors receive their first impressions of Argentina. A sophisticated blend of South American verve with European sensibilities is everywhere present. The city is filled with impressive architectural sites and museums. Visitors like to wander the streets, to walk the waterfront and, not least of all to dine out and enjoy the dynamic nightlife. Over one-third of the population of the country live in the greater Buenos Aires region.

But there is much to Argentina beyond Buenos Aires and the Pampas. Argentina’s Lake District is a lovely stretch of glacier-sourced lakes set in the middle of snow-capped mountains, waterfalls and forests. The Medoza wine region at the foot of the Andes thives in the fertile soils of the area. Argentina’s wines now rank as some of the world’s best, and the wine country is a popular touring destination. Many spas have opened in the Mendoza area to host visitors eager to sample the Malbec varietals. 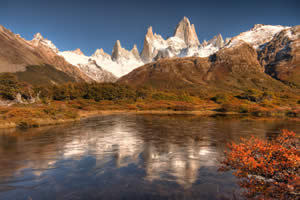 Sitting at the juncture of the Iguazú and Parana rivers at the border of Argentina, Brazil, and Paraguay, Iguazú Falls remains one of the nation’s key natural attractions. Visitors to falls need to remember that each country has differing visa requirements and should be prepared ahead of time if you plan to see the region from the Brazilian side.

The Andes run through Argentina, rising high above the plains. Aconcagua, the highest mountain on the continent is the target of some of the world’s most accomplished mountain climbers. In the deep south, the region known as the Magallanes, ending in the realm of fire and ice, is Patagonia. The jagged Andes and the enormous ice fields host dozens upon dozens of ancient glaciers. Argentina’s Los Glaciares National Park is a wildly visual spectacle and the massive rock formations and ice mountains sites to behold. Separated by the Strait of Magelland from the continent, at the very extreme tip of the country, sits Tierra del Fuego – literally the land of fire. Patagonia is a nature lover’s dreamscape. The spectacle of whales and penguins on the Atlantic Coast against a backdrop of the peaks and glaciers of southern Patagonia is nearly without equal.

Your travel agent will know which tour operators have the experience and the expertise to introduce you to Argentina. Perhaps you have always wanted to go, or maybe Argentina has never been on your travel radar. Whatever the case, take the time now to consider a trip south to one of South America’s most pristine geographies and varied cultures.