Bavaria is Germany’s biggest state with an area of 27,000 square miles accounting for about a fifth of Germany’s total area.It’s in Germany’s south-eastern quarter and has a population of about 12.5 million people.

Munich is the capital city of Bavaria and is the third largest city in Germany.  Munich was the host city of the 1972 Summer Olympics and is a candidate city for the 2018 Winter Olympics. There’s much more to Bavaria, Germany than just the capital city.

The region begs to be explored and there are ten other cities most definitely worth a visit–each complete with an ornate castle, palace, or city hall, or sometimes all three!

German kings liked to build their palaces in Nuremberg, once the unofficial seat  of the Holy Roman Empire. Nuremberg’s Hauptplatz comes alive with Germany’s most  famous Christmas market in December. Locally made foods include Lebkuchen and the  Nürnberger Bratwurst. Explore the medieval Old Town (Altstadt), framed by city  walls and the glorious Imperial Castle (Kaiserburg). Then pay a visit to the  Reichsparteigelände, a massive open area where the infamous Nazi Nuremberg  Rallies of the 1930s were held. 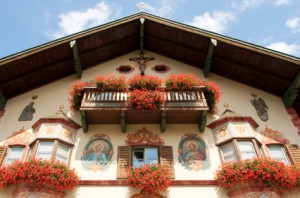 Germany’s second-oldest city, Augsburg, lies roughly halfway down the Romantic  Road touring route. It came to prominence in the Middle-Ages under the lights of  Jakob “the Rich” Fugger, a worldwide baron in global banking and trading. Most of  Augsburg’s landmark buildings are the work of architect Ellias Holl. Chief among  them is the  monumental Town Hall (Rathaus) and its showpiece Golden Hall  (Goldener Saal). Another top attraction is the Fuggerei, the world’s oldest  social housing settlement.

Würzburg is a bustling university town on Bavaria’s northern border. Although  over 90 percent of the city was destroyed in World War II it has since been  lovingly restored. The city sits along the river Main and is the center of the  famous Franconia wine region. Würzburg’s premier residence is a baroque palace  aptly named the Residenz.

If you can picture an idyllic life in the Middle Ages, undoubtedly you would be in  Regensburg where the center of the town is a UNESCO World Heritage Site. It sits  at the confluence of the Danube and Regen rivers, the former straddled by the  humpbacked Stone Bridge. It’s one of the most-loved cities in Bavaria and an easy day-trip from Munich.Take a cruise along the river or explore the Old Town with its maze of intertwined alleys centered around the twin-spires of St. Peter’s Cathedral. 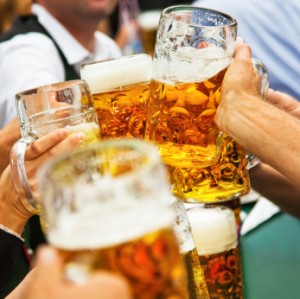 Another age-old Danube city, Ingolstadt has some history from the tragic to the mysterious and to the futuristic. It was the birthplace of author Mary  Shelly’s, who brought a creature to life with her character Victor Frankenstein. Secondly, it was the birthplace of the real secret society known as the Illuminati, meaning “Enlightened”, which some theorize work a shadowy hand on the world’s governments and big business. Finally, Ingostadt is the headquarters of the Audi, the luxury car company–a factory tour is well worth it if you don’t pick up a car to take home with you.

Fürth is often overlooked by visitors in favor of its big brother city, Nuremburg, given that the two are only a stone’s throw apart. Fürth was a totally separate entity for much of its 1000+ year history and boasts a flavor all of its own. Don’t miss the grand municipal theater (Stadtheater) and the  Jewish Museum. Little known fact: Fürth once had the biggest Jewish population in southern Germany.

Another city close to Nuremburg, Erlangen is best known for the University of Erlangen-Nuremberg–a college town with broad, tree-lined streets. Major sites to see include Erlangen Castle which today houses the university administration, and the botanical gardens.Erlangen’s annual Bergkirchweih is a 12-day mini-Oktoberfest that takes place around Pentecost in May or June. Erlangen is one of the more overlooked larger cities in Bavaria.

Bayreuth is best known as the home of composer Richard Wagner, an artist worshiped by King Ludwig II and Hitler alike. The temple to Wagner’s works is the Bayreuth Festspielhaus and is the site of an annual showcase of the composer’s operas. Also worth a look is the expansive New Castle with an enviable collection of porcelain. But all in all, this is a top destination for classical music buffs. 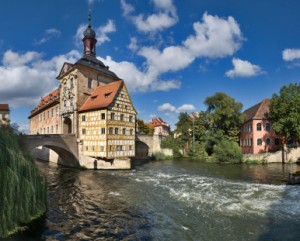 One of the most stunning smaller cities in Bavaria, Bamberg is often called the “Franconian Rome” for its seven-hills. It also has a similarity to Italy’s Venice with a network of canals and streams complete with tourist laden gondolas. A stroll up through the old town, past the town hall island to the magnificent  cathedral and Neue Residenz will have even the most jaded travelers craning their necks in awe. And before leaving town, be sure to have a taste of their famous Rauchbier (a beer) which is a hearty ale with a bit of a bacon flavor–sounds gross, but it very good!

They don’t call this town the “Bavarian Nice” for nothing. Replete with Mediterranean gardens, long alleys and a sunny climate perfect for tropical plants. Aschaffenburg is tucked away in the area’s northwestern corner and is a short trip to Frankfurt. As far as Bavaria goes, it is probably the most remote city of the region. Things to see here include the Schloss Johannisburg castle and the Pompejanum, a replica of a Pompeian palazzo built for King Ludwig I.