When most people think of Canada, they either think of Pippi Longstocking or cold frozen tundra. Very few think of Canada as a cruise destination. Sure, a few may recall that Vancouver is one of the gateways to an Alaskan adventure, but what about the Eastern half of Canada? They have cities and towns too—and all worth seeing! If you are cruising, many of the smaller ships will call on these port cities directly. Larger ships may require a shore excursion, but regardless of how you travel to the area, these six cities and towns should be on your bucket list.

Bluenose schooners once sailed the world from Halifax harbor. Fast and nimble, they plied the seven seas in search of enemy ships. And when they spotted them, they attached and brought their booty to the vast warehouses along Privateer’s Wharf. Today you, too, can sail aboard the schooner Bluenose II, although there is no booty. Other pastimes include a tour of the Historic Properties area (Old Halifax), the Citadel, and a countryside tour of the Bay of Fundy and Acadia, the setting for Longfellow’s Evangeline, and pretty-as-a-picture Peggy’s Cove with its pastel houses and fishing trawlers, the pure definition of a Nova Scotian village.

The people of Newfoundland, an island separated from the rest of Canada, have a unique culture and language that sets them apart from the mainland as well. Rumored to be the sunniest city in the usually-foggy province, Corner Brook is situated at the mouth of the Humber River, teeming with salmon. If you find a local guide who has been there for any length of time, you undoubtedly will hear tales of the buried treasure of Shellbird Island, guarded by the “Old Man in the Mountain.” 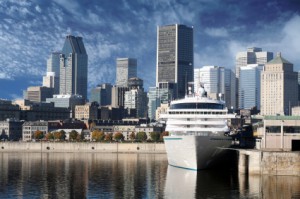 If you love The City of Light, Montreal should be on the top of your list as well. Montreal greets you with French savoir faire and English no-nonsense business acumen. Jacques

Cartier founded the area in 1535, and today Montreal is Canada’s largest city. From the top of Mont Royal look out over the towers of McGill University and the old walled city of Vieux Montreal. Here you can catch a fleece-lined calache (carriage) ride around the Place d’Armes, the magnificent Notre Dame Cathedral, and the walled Sulpician Seminary. Being in Canada, Montreal does have its share of snow, so be sure to check out how they escape from the harsh winters at the Underground City, a huge complex with six hotels and hundreds of shops and restaurants.

Protected by the looming spires of the venerable Chateau Frontenac, Quebec City’s Lower Town crowds the narrow shore of the St. Lawrence River. Above the cliffs, in Upper Town, Quebec’s provincial capital goes about the daily business of government, but here, in narrow cobblestoned streets bordered by 17th-century stone houses, you feel like you’re in the heart of medieval Europe. In fact, Quebec is the only walled city in North America. The beautiful Notre Dame des Victoires Church was built in 1688 on the site where Samuel de Champlain founded Quebec in 1608. Also of note is the Plains of Abraham mark where British won Canada from the French in 1759. 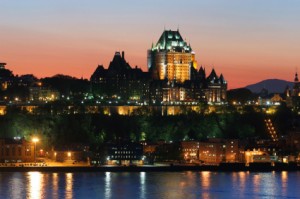 Although Champlain landed here in 1604 and named the town, it wasn’t settled until 1783 by Loyalists fleeing the colonies during the American Revolution. Canada’s Maritime Province of New Brunswick is intriguing, with its well kept farms, stately Georgian manors and, in a throwback to merry old England, tea at four. The geography is just as interesting with vast forests, rushing rivers, and incredible tidal shifts that can cause a rise and fall more than fifty feet fueled by the Bay of Fundy.

On Cape Breton Island, the Scots found a land that most resembled their own beautiful home. Even today, yo might think you are in Scotland with the droning of bagpipes and many people speaking Gaelic. Sydney is home to one of the most scenic and dramatic drives in North America (it rivals the Road to Hana) with the Cabot Trail which winds around the coast. Another population which is plentiful in Sydney is the bald eagle. There are an estimated 250 pairs who make their homes (nests) atop the trees next to Bras d’Or Lake.

Posted in Outposts | 6 Comments »
Tagged With: