Posted on August 9th, 2010 by John Frenaye in Outposts

Puerto Rico is one of the largest islands in the Caribbean and while not a state, is under U.S. jurisdiction. However, if you are looking for anything mainland-ish on the island, look elsewhere. Puerto Rico is decidedly a different culture composed of many including Spanish, Latino and Caribbean. Their Spanish heritage comes through loud and clear and is especially noticeable in the restored Old San Juan District. 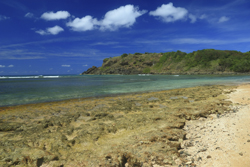 Being a very Catholic island, Puerto Rico  is home to many monasteries, convents and shrines where the Virgin Mary is said to have made appearances before the faithful. One of the more storied convents is the San Juan Convent authorized by Spain’s King Philip V. During the building’s long history, it has been a nunnery, a grand hotel, and a casino. The San Juan Cathedral, dating to 1521 is the Western Hemisphere’s oldest such structure. Also in San Juan, you will discover the oldest continually occupied governor’s mansion, and the home of first governor Juan Ponce de Leon. A popular legend says that Governor Ponce de Leon set out to find the legendary Fountain of Youth and “discovered” Florida instead. In reality, he was in search of gold to fund the dowries of his many daughters.

Eco-tourism is alive and well in Puerto Rico. El Yunque, “The Anvil” in English, is a tropical rain forest jungle ensconced in mist and rain. Typical trees soar more than 100 feet off the forest floor. This jungle paradise is replete with the indigenous Puerto Rican Parrot and the tiny coqui (tree frog), which is a national symbol. The water from El Yunque’s two waterfalls is rumored to have a rejuvenating effect, but as with travel to most destinations, you are better off with the bottled stuff. 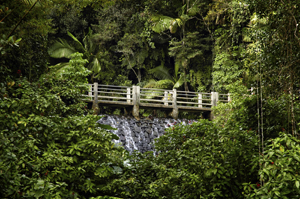 The Southwestern quadrant of the island is renowned for its fishing villages, hidden beaches and the laid back attitude of the residents. In this region, you can have some unique culinary experiences including fresh clams and oysters chased with fresh coconut water.

The island’s second largest city, Ponce, may have been named for Ponce de Leon, but history cannot confirm. Locals refer to the city as La Perla del Su – the Pearl of the South. Ponce bears a strong resemblance to provincial Spain in the daytime when locals gather in the cool shade of the Plaza Central.

While there is no shortage of fine resorts and hotels across Puerto Rico, the island is also home to many  country inns known as paradores. These government-promoted inns, patterned after those in Spain, are ideal for inexpensive family vacations and usually come with a rustic, authentic setting.

Because of the U.S. ties, you can expect faster and more professional service in Puerto Rico than in other Caribbean nations. On the culinary scale, Puerto Rico has something 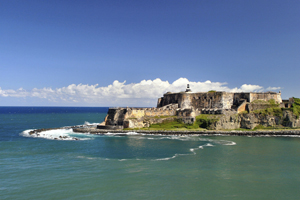 for everyone–local, Spanish, Chinese, Creole, Japanese, seafood, nouvelle, or just plain American are all available to whet every appetite.

In terms of nightlife, there are two different times—day and night. And they are as different as, well, day and night. During the days, the bars and clubs of San Juan are flooded with cruisers who are either starting, ending, or stopping in this popular port of call. At night, the crowd is a bit more local and a lot more authentic with many clubs staying open until the wee hours. The drinking age in Puerto Rico is 18, yet strangely enough, in the airport it is 21!  Although heavily Catholic, Puerto Rico is one of the more gay-friendly islands in the Caribbean basin.