Posted on September 13th, 2010 by John Frenaye in Outposts

Let’s get one thing cleared up right away. Just as there is no “I” in “team”, and there is no “U” in “Colombia” as long as we are talking about the country!

Another thing which needs to be addressed right away is security. Colombia hasn’t been known as the safest country. In fact, it was only a few years ago, Colombia was regarded as the “world’s most dangerous country.” But that situation has vastly improved over recent years. Don’t let the rumors and urban legends scare you off. Simply use the same caution you hopefully use in any major city in the US and you will be prepared to truly enjoy this unique destination. 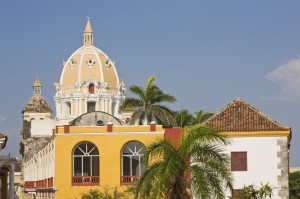 Colombia is blessed with a coastline along the Atlantic as well as the Pacific Ocean. Although the country is characterized by natural and cultural diversity, Colombians are a tightly knitted culture and tend to stick together. Their family ties are very strong, which makes it easy to explain why the world’s most famous (or infamous) cartels originate in Colombia. The geography of Columbia is very diverse – you have the mountains, valleys, deserts, lowlands, shorelines and jungles all rolled into one country!

The earliest records show Colombia as being inhabited by indigenous groups such as the Chibcha. From the 1600s to the early 1800s, Colombia was a colony of Spain and gained freedom only in 1819 when it split from what is now Peru, Ecuador, and Panama.

We mentioned the unique geography which defines the country. There are three Cordilleras (branches of the Andes) with two valleys sandwiched in between them.  The Cordilleras are also crisscrossed my several rivers and populated by jungles. Colombia is home to the highest coastal mountain range (the Sierra Nevada) and a jungle on the Pacific coast which holds the record for the highest rainfall in the world. The Pacific lowlands are swamped and have thick forests, and the Andes mountains cover about one third of the country. The plains make up 60% of Colombia’s land mass, yet only 25% of the country’s population lives there due to the extreme heat. Colombia is also home to some pretty spectacular animals including jaguars, ocelots, peccaries, tapirs, deer, armadillo and the rare spectacled bear. It has 1550 species of birds and its herbariums have classified over 130,000 species of plants!

In terms of the “must see” places for Colombia’s visitors, Los Kation National Park is located in the west of Colombia close to the border with Panama and is a park with forest and hills with an extremely rich and biologically diverse ecosystem.  Cartagena is a moderate size city and arguably the most beautiful in the country. It is located along the Caribbean coastline in the northwest of the country and is on the UNESCO World Heritage list—Cartagena is a popular port for many cruise lines.  Colombia is a country where you can visit parts of the Amazon Basin. Since it is not the easiest sight to see, it is recommended to base yourself in Leticia in the southwest corner of the country on the border with Brazil and Peru.   Playa Blanca is a beautiful, isolated beach located on Baru 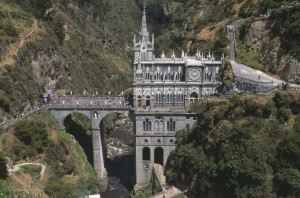 Island which lies off the coast of Cartagena near Las Islas del Rosario. It is extremely laid back with no running water or electricity, so expect little in the way of creature comforts. However, it is what many people envision a perfect Caribbean beach.  Finally, Isla Gorgona is a national park located in the Pacific Ocean off  the Colombian coast. Formerly it was a prison island and now it is a major tourist destination with a national park, dense forests and copious wildlife including poisonous snakes, whales, monkeys, lizards, turtles, and the Blue Footed Boobie (typically only found on the Galapagos).

In Colombia, you will never run out of interesting things to see and do. The country is rich in history, art and culture, and spectacular scenery. While Colombia has not been established as a tourist destination for long (1940s), it has been growing rapidly in the past decade and shows no signs of slowing down.

Posted in Outposts | 3 Comments »
Tagged With:

3 thoughts on “Colombia — By Solar Tours”