Every year, TravelQuest heads to ASTA’s tradeshow and this year was no exception.  The weeks before are always a frenzy for me as I put together the final details, make sure everything is purchased and packed for the show, and, of course,  type up the very important document for the dogsitter— 10 Easy Steps to Making Rigel a Happy Dog.

This was my third year having a booth at the tradeshow and I can honestly say that it was the most successful show we’ve had.  My first tradeshow was extremely embarrassing.  I had no idea what I was doing, had a very small budget, and didn’t plan appropriately.  This combination is lethal—our booth had about as much flair as a boarded up house.

Well, let me restate that.  There was definitely some ‘flair’ to our booth.  As some of you may know, TravelQuest is family-run.  Long story short, it was me, my mom, and my dad running the booth.  I happened to have won an award that year that was being presented at the tradeshow and my parents were so proud. 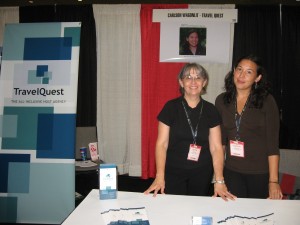 poster stating “ASTA’s Young Professional of the Year” to be used as the backdrop.  Below the title of the award they had emblazoned my face and, beneath that, sealed the parental badge of pride with “Our very own…. Stephanie Lee”.  You can imagine how uncomfortable this was for me as I spoke to people and saw their eyes drift behind me… to me.

Despite this minor setback, I moved on and stuck with the tradeshow circuit.

For our second tradeshow, I was determined to rise above.  I came prepared with banners, redesigned brochures, and an attention grabber. Nothing repels the crowds more than an empty booth.  I can hardly fault that mentality as I am naturally repelled as well!

It’s all in the details and those small tweaks allowed us to be classified as an adequate booth.  We had a steady stream of agents at most shows but I can’t say we stood out when you were walking by.  In my opinion, to find what works, it’s trial and error.  I’m a gargantuan fan of gum and decided one year to put TQ labels on sticks of gum for our booth goodie.  Thought it’d be a huge hit.  For those that have tried this tactic before, did you also find everyone thought you were giving away band-aids?

This year, I knew if I wanted to step it up, I needed to really give it some thought.  I learned some valuable lessons through the past tradeshows.  A) Check my parents’ suitcase for any embarrassing congratulatory posters they may have hidden B) Booths aren’t naturally a success, they are a success because you learn from your mistakes, plan ahead, and make it happen.

Stephanie Lee works in Operations at Travel Quest, a host agency out of MN with over 200+ home-based travel agents.  She graduated from the College of St. Benedict/St. John’s University with a degree in Environmental Studies/Liberal Studies.  She was awarded ASTA Young Professional of the Year in 2008 and was named one of Travel Agent’s “30 under 30” in 2009.  She can be reached at Stephanie@TQagents.com, via Google+, or 800.392.6484.  For more information on Travel Quest visit www.TQagents.com or www.facebook.com/TQagents

Posted in Travel Agent Diaries | No Comments »
Tagged With: