Posted on February 3rd, 2011 by Ralph Grizzle in Deck Plans

In 2006, I cruised around the horn of South America. Weeks before my South America cruise, I tried to form mental pictures of the places our ship would visit: Buenos Aires, Montevideo, the Falkland Islands, Ushuaia and Valparaiso.

My resources were sorely lacking. I could not recall having studied South America in high school, and my only exposure to Latin America had been jaunts to Mexico, Guatemala and a handful of other Central American countries. 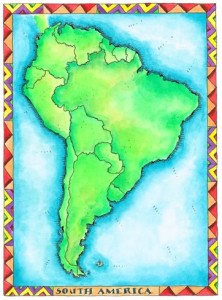 South America, in my mind, was similar to those Central America nations — destinations only for intrepid travelers. Wearing dusty boots, worn jeans and shouldering their belongings in sturdy backpacks, they endured bumpy bus rides, sharing space with caged chickens and goats destined for local markets.

In the late 1980s, I had made a similar journey from Belize City to Guatemala City. An hour or so after crossing the border into Guatemala and bumping along dirt roads at a snail’s pace, an armed rebel group stopped our bus and ordered us off. After a lengthy inspection and interrogation, we were waved on, but the young men brandishing weapons made a memorable impression.

The little that I thought I did know was that, like Central America, South America was not a place for safe or salutary travel. If a rebel group did not get you, then the food and water would. A bout with Montezuma’s Revenge in Mexico in the early 1990s made me pay particular heed to the U.S. Department of State’s warning about food in Latin America: “Boil it. Cook it. Peel it. Or forget it!”

During my cruise, fellow passengers told me they had shared similar preconceived notions, not so much that South America was a dangerous or unsalutary place, but that it was a primitive one.

While regions of the vast continent certainly are largely untouched by the broader aspects of civilization, we were all surprised by the European overlay on cities that fooled us into thinking we had somehow made landfall on the other side of the Atlantic — in Europe.

South America was nothing like I had imagined it would be, and two weeks cruising the bottom half of the world’s fourth largest continent dispelled all that my mind could conjure.

If you’ve not traveled South America, consider putting it on your bucket list. You’ll be amply rewarded.