A new and periodic feature for Travel Research Online will be “By The Numbers”. This column will take a hard look at the financial and operating benchmarks that tell the bottom line tale of agency economics.

The source content for By The Numbers will come from TAMS (Travel Agency Management Solutions), the premier financial benchmarking and networking organization in the travel industry.

TAMS membership involves 120 travel agency and travel management companies (TMC’s) in North America, ranging in size from $2 million to over $700 million in annual sales.  Each member submits all of their financial data as well as some non-financial operating data on a quarterly basis. Unlike virtually all other industry benchmarking data or services, to insure the best accuracy possible, most TAMS data is directly imported from back office accounting systems. That data is then analyzed and compared on the basis of over four hundred performance related metrics. Members receive quarterly reports benchmarking these metrics against a peer group and meeting three times a year for idea and best practice exchange sessions.

By The Numbers will provide a quarterly look at the most important key economic indicators for the previous quarter and a yearly summary at the end of the year. Between quarters By The Numbers will look at a specific performance issue impacting agency success.

Dr. Joselyn makes it clear that the information derived from TAMS data should not be considered representative of the agency community as a whole. “Our members make a serious commitment to providing and analyzing data and sharing best practices. They are above average dedicated business people. And, they have to put up with me as a business coach.”

Dr. Joselyn, has been one of the best known management consultants in the travel industry over the last quarter century. He is President and CEO of TAMS and of Joselyn, Tepper & Associates, an industry consulting firm. He holds a doctorate in Operations Research as well as an MBA and a degree in Structural Engineering. He is the author of seven books and an internationally recognized speaker.

This is the first edition of a quarterly look at key travel agency performance results from the previous quarter. The information is based on data and analysis from the 120 North American members of TAMS, the most comprehensive travel agency financial and operating data benchmarking and networking in the industry. Full quarterly TAMS reports include over 400 metric comparisons. 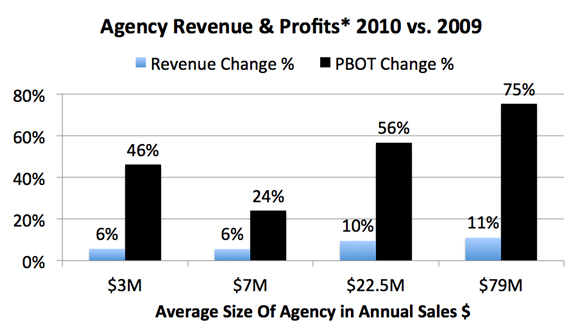 There is little doubt that 2010 demonstrated that agencies took the steps needed to adjust to the economic challenges facing them. Sales and revenues were up both for leisure and even more so for corporate travel over the substantial decline in 2009. What is most striking is the dramatic increase in profit before owner takeout (PBOT). Every category of agency showed an increase and there was 100% agency member profitability for every size category but one, and for that category the profitability rate was 98%.

The single best metric for how well an agency is financially managed is the percent of revenue that is taken to the bottom line (PBOT). 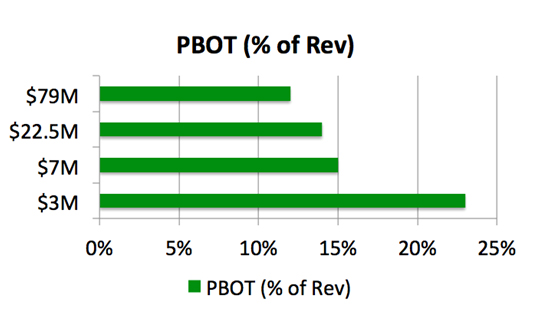 In 2010 the average agency took between 13% and 15% of their revenue to their bottom line PBOT with the smallest agencies dong the best at 23%. Surprising as that may be, this was nearly at pre recession levels. While increased revenue accounted for a good portion of these results the impact of 2009 cost cutting on 2010, expense reduction, primarily in labor costs, played a huge role. 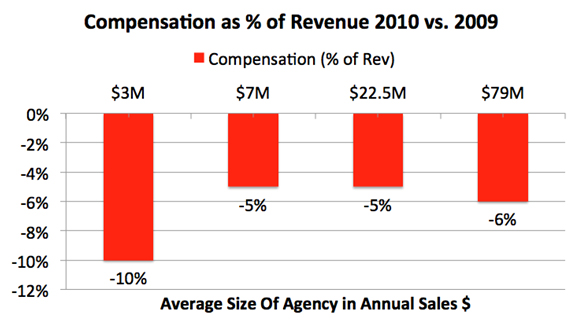 Note that the smallest agencies reduced their compensation as a percent of revenue the greatest. In all cases the reductions were a result of many factors including reductions in staff, cutbacks on base compensation, and a shift from salary to commission compensation formats for sales employees.

How do your numbers stack up to these averages? By The Numbers will report key metrics on a quarterly basis with mid quarter reports on specific areas of management importance.

For membership about TAMS, contact Robert Joselyn at rjoselyn@tams-jta.com or by phone at 480-443-0098.

Posted in Point-to-Point | No Comments »
Tagged With:   Joselyn