Wide, tree-lined roads, stunning buildings and a reputation for the high life – “Little Paris,” or Bucharest, Romania is the largest city in the country and a bustling metropolis that combines the old and new of eastern Europe.  Its over 2.6 million citizens can trace their history back to 500 BC, being first documented in 1459 and, since then, becoming a fantastic getaway for travelers who enjoy a little bit of everything.

Be sure to continue reading to find out what great specials GTT Global is offering to visit the Romanian capital for the summer and beginning fall months.

As mentioned earlier, Bucharest can trace its established roots to the 15th century.  With such history comes the evolution of its people, and with that, beautiful architecture that has evolved to meet the taste and times of life in the area.  From the House of the Free Press, which originally housed all of the capital’s printing presses and newsrooms (and still does, to a degree) and home of the Bucharest Stock Exchange to The Arch of Triumph (remember that “Little Paris” nickname?), the buildings span the centuries, representing victories in wars to the independence of the country in the 1870s. 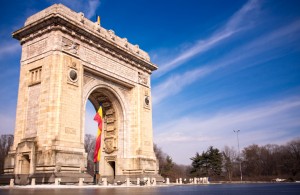 For even more history, visiting the Calea Victoriei, or Victory Avenue, and the Revolution Square are well worth your time.  Victory Avenue is Bucharest’s oldest street, established in 1692 and known for its fashionable status.  The Revolution Square, on the other hand, became famous on December 21, 1989 when Nicolae Ceausecu’s final moments in power were aired as the people turned on him and on communism in general.  This was one of the defining moments in the crumble of the political power that ruled Europe since the end of World War II, and is without a doubt worth some time to visit.

There are also a vast amount of museums and churches that have captured even more of the Romanian essence, especially within the Old Historical Center of Bucharest.  One of the most ideal locations is the Lipscani District, which is an organization of streets that were once home to stores and shops of merchants and craftsmen in the 1400s.  The mash-up of nationalities can be seen within the general architecture from baroque to neoclassical to art nouveau – influenced by Austrian, Greek, Bulgarian, Serbian, Armenian and Jewish immigrants and travelers.

Evening and Other Fun

Entertainment is important to the residents of Bucharest, easily noticeable given how many cafés, clubs, movie venues and bars exist within the city limits.  Jazz is high on the list of popular genres, and clubs catering to nothing but jazz lovers are plentiful.  The circus is also a passion of Bucharest’s citizens, with the Bucharest Globus Circus at the heart of the movement.  Built in 1960, the 3,500-seat permanent big top hosts performances both by locals and touring groups.

Finally, for those who enjoy taking risks, gambling has put Bucharest on the map.  With more and more casinos opening due to the limited amount offered in east-central Europe, 18th and 19th century palaces and mansions have undergone a drastic transformation, now full of guests playing 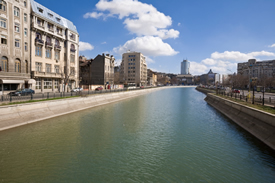 blackjack, poker, craps, and other games of chance.  Plentiful buffets and live music are also common, taking full advantage of the historic buildings while preserving them and breathing into them new life.
ques to art galleries.  The main benefit for visitor and resident alike is that there is a fit for any taste or budget, from everyday shoppers to luxury fashionistas.

Shopping and Getting Around

Bucharest has witnessed a boom in brand names and high-end stores entering the country since the 1990s, ranging from high fashion boutiques to art galleries.  The main benefit for visitor and resident alike is that there is a fit for any taste or budget, from everyday shoppers to luxury fashionistas.

Transportation is also very modern, and getting around not only Bucharest but also the rest of the country is as easy as hopping on any of the convenient public transports, including trains, trolleys and buses, the subway, and of course, the Henri Coanda International Airport.  Located roughly 12 miles north of downtown, the airport offers ATMs, an exchange office and even cell phone rentals so you can avoid those costly roaming charges.  Renting a car is also feasible here, in case you are the type who prefers to take charge of sightseeing instead of relying on others.

Bucharest is an extremely modern city that strives daily, and succeeds, in breaking the stereotypical Eastern European myth of still being stuck in the communist times.  Modernism is a way of life here, and preserving their unique history offers visitors a pleasant experience that cannot be had anywhere else.

Share your thoughts on “Bucharest, Romania by GTT Global”