What’s approximately 600 miles off the coast of Guayaquil, one of the most popular sites in Ecuador, and is home to giant turtles, prehistoric iguanas and a variety of other unique species found nowhere else on this planet?  If you guessed The Galapagos Islands and the Galapagos National Park, you’re right.  This unique island is home to some of the most diverse and almost out-of-this-world creatures to ever walk the planet, and was a heavy influence for Charles Darwin’s controversial book, The Origin of Species.

The islands, which are heavily vegetated, are comprised of 13 large volcanic islands, 6 smaller islands and roughly 107 rocks and islets.  For most, including the creatures that inhabit it, it is considered a true paradise, its natural beauty running rampant, 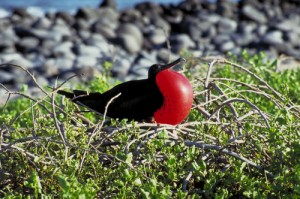 white-sand beaches lining the coast with lava tunnels and animals dispersed throughout.  Declared a UNESCO World Heritage Site in 1978, they are also well known by their nickname of “The Enchanted Isles.”

You’ll have a hard time finding creatures any more interesting (or with stranger names) than you will in the islands.  With marine iguanas basking on the rocks or blue-footed boobies flying overhead, you’ll feel as if you are a visitor on a foreign planet, one that has not been influenced by mankind.  It is the closest you will ever get to pure wildlife, and that reason alone is more than enough justification to see it.  Reachable via a short flight from Quito, Ecuador, the combination of the isolation and late discovery by humans, adding in the historical lack of predators, sets the stage for a unique environmental experiment, developing into arguably the greatest showcase of evolution in the world.

There are many islands that should not be missed, with the island of Floreana (Charles) Island leading the way.  With a surface area of 67 sq. mi., the island was named after the first president of Ecuador, Juan Jose Flores, whose administration took possession of the archipelago in 1832.  Ideal visiting time for this island is between December and May, when pink flamingos and green sea turtles nest.  Deeper into the island, the “Devil’s Crown” underwater volcanic cone is where visitors can observe unique coral formations.

Stretching over 5.4 sq. mi., Genovesa (Tower) Island is what is left of a large submerged crater.  Also known as “Bird Island” due to the population of swallow-tailed gulls (which are the only nocturnal hunters of the species), visitors can also witness blue-footed boobies, lava gulls, swallows and other tropical birds.

Baltra (South Seymour) Island covers an area of roughly 10 sq. mi. and is the site of the island’s main airport, which was built during World War II by the U.S. Military, branches of which can still be seen there today.  The island is also extremely arid, populated with wild desert flora, predominately cactus, and is a perfect location for surfing, snorkeling and diving.

Spanning over 381 sq. mi., Santa Cruz (Indefatigable) Island is home to the archipelago’s largest settlement, the town of Puerto Ayora.  Famous for their lava tunnels and one of the area’s best beaches, Black Turtle Cove, the clear waters are ideal for surfing and snorkeling.

Bartolome (Bartholomew) Island is a tiny 0.4 sq. mi. across.  Its most distinguished landmark is Pinnacle Rock, which is a stone tower in the shape of an obelisk reminiscent of the archipelago itself.  Visitors can also see seals and the Galapagos penguin, along with lava formations and recently formed volcanic cones. 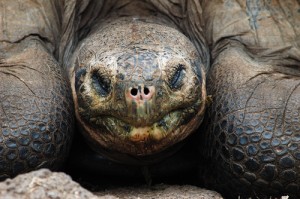 Finally, Isabela (Albemarie) Island. Another home to the Galapagos penguin, it also provides shelter to marine and land iguanas, blue-footed boobies, pelicans, Salty Lightfoot crab, Galapagos hawks and Galapagos doves, all of which thrive in the lush vegetation.  The third largest human settlement, Puerto Villamil, can be found on the southernmost tip of the island.

The Galapagos Islands are a unique experience, and one that should not be missed by a traveler who appreciates nature in its purest form.

Share your thoughts on “The Galapagos Islands by Sunny Land Tours”