Posted on August 9th, 2011 by Brandi Lessner in Outposts

Renowned for its frenetic pace, ever on the edge of invention, New York City’s creativity includes amazing restaurants, chic nightclubs, cutting-edge theater and architectural masterpieces. Combine this with the fact that New York City is also a global financial capital, and you can understand why it is considered the greatest city in America.

The epicenter of New York City life has always been the island (borough) of Manhattan, surrounded by four other distinct city boroughs – the Bronx, Brooklyn, Queens and Staten Island – all of which have their own character and attractions.

New York City is the largest city in the United States and has a population of over eight million, which, as people continue to flock to New York City, is likely to grow even larger. This is Broadway, this is Wall Street, this is a city of history and legends, and who wouldn’t want to visit it at least once -even if it is just to say they’d been there.

New York’s famous Empire State Building, a New York City Landmark and a National Historic Landmark, soars more than a quarter of a mile into the atmosphere above the heart of Manhattan. Located on the 86th floor, 1,050 feet (320 meters) above the city’s bustling streets, the Observatory offers panoramic views from within a glass enclosed pavilion and from the surrounding open-air promenade. Since the Observatory opened to the public in 1931, hundreds of millions of visitors have thrilled to the awe-inspiring vision of the city beneath them.

Located on Liberty Island in New York Harbor, the Statue of Liberty was a gift of international friendship from the people of France to the people of the United States and is one of the most recognized symbols of political freedom and democracy. Liberty Island is accessible by Circle Line-Statue of Liberty Ferry, Inc. ferries only. One round-trip ferry ticket includes visits to Liberty and Ellis Islands. 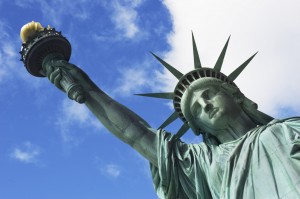 Legendary Times Square, the heart of Broadway and of countless huge New York gatherings, recently celebrated its 100-year anniversary. Filled with its neon signs, screaming ads, giant screens, Times Square “the crossroads of the world” is more than ever a sight that overwhelms, its flashing lights reaching to the sky. The main attractions in Times Square include ABC Studios, WWE Store and Toys”R”Us.. At the Times Square Visitors Center you can get free citywide information from multilingual tourist counselors, get free maps and brochures, purchase tickets to Broadway and Off-Broadway shows from the Broadway Ticket Center & more.

The world-famous Macy’s Thanksgiving Day Parade has been a holiday tradition in New York City since 1924. Musical and dancing performances paired with cartoons turned skyscraper-height balloons make this a once-in-a-lifetime event for all ages. Classics like Mickey Mouse, Kermit the Frog and Ronald McDonald meet new favorites such as Buzz Lightyear, Spongebob Squarepants and Kung Fu Panda for a day guaranteed to please all generations.

The United Nations Headquarters building in New York City is the home of the international organization and one of the most-visited sites in the city. Guided tours are conducted seven days a week (Monday to Friday only during January and February). Tours are conducted from 9:30 a.m. to 4:45 p.m. Monday to Friday; Saturday and Sundays from 10:00 a.m. to 4:30 p.m. Tours in English normally leave every half hour and last for approximately 45 minutes to one hour.

One of the most successful ships in US history is now one of the most unique attractions in New York City. Berthed on the mighty Hudson River in Manhattan, the Intrepid Air & Sea Museum boasts educational exhibits and exciting events. After being closed for a lengthy renovation, the museum reopened to the public on Nov 8th 2008.

Central Park extends from 59th to 110th streets and 5th Avenue to 8th Avenue. It is home to a zoo, playgrounds, skating rinks and a lot more. One of the most romantic and popular ways to see Central Park is from a horse-drawn carriage. Rides cost $34 for the first 20 minutes and $54 for a 45 to 50 minute tour. For more information, call 212-246-0520. These carriages line up at 59th Street and Fifth Avenue across from the Plaza Hotel.

The Metropolitan Museum of Art has specimens of different categories of art from all over the world during every epoch of recorded time . Going through the entire Met is a full day affair. Within are more than two million works of art including arts of Africa, Asia, Europe, Egypt, Greece, Rome, medieval art, musical instruments, photographs, and 20th-century art.

The Madison Square Garden or as it is popularly known, “The World’s Most Famous Arena” is a must see for all sports fans. Be sure to take an All Access Tour of the Garden and visit the Knicks, Rangers and Liberty locker rooms; tour backstage of the Theater at Madison Square Garden; go inside the Star dressing rooms; see players practicing, performers in rehearsal or crews staging events! You’ll never know what you’ll see on the All Access Tour.

A list is not complete with a trip to the Bronx and Yankee Stadium. Love or hate the team, the greatness of those who have played for this team cannot be discounted. The new stadium is a masterpiece and a shrine to the sport, second only to Cooperstown.

New York City is one of the gastronomy capitals of the world. Whether it’s street food, world-famous pizza, ethnic delicacies or five-star dining, every palate will be excited and challenged with a visit to the island. 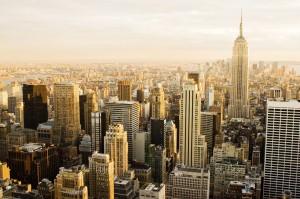 Ray’s and Patsy’s are two iconic pizza joints in the city that have been feuding over the title for “Best Pizza” for decades. While any native New Yorker will tell you to head one way or the other, why not decide for yourself and try a slice from both? If getting in the middle of a grudge match is not your idea of a good time, any pizza you find is sure to satisfy as legend has it that the water in the city is the reason any bread product just tastes better in the Big Apple.

Fine dining has been perfected in Manhattan, with as many upscale restaurants as there are people to frequent them. The Russian Tea Room is famous for its gorgeous atmosphere and breathtaking culinary offerings. Guests can choose from attending High Tea, any number of brunches/lunches, dinner, caviar and dessert or just enjoy a cocktail at the bar. It is important to remember that (as with most New York City restaurants) that reservations are absolutely necessary.

We could spend all day recommending restaurants, but to really experience New York City, just walk around and see what strikes your fancy. There are plenty of establishments to choose from and you’ll have a hard time finding something you don’t like.

Manhattan and the outer boroughs are wired with efficient and affordable transportation. The subway is fairly simple to navigate and extremely cost-effective. Taxis are plentiful and, especially if the fare is being split between multiple passengers, will not put much strain on the wallet. Taxis can add up, however, so be mindful of other ways to get around. Since the island is so small, walking around not only saves money but allows for more sightseeing and taking notice of smaller venues one may not catch if traveling by car.

New York City is a bustling, entertaining and awe-inspiring city that every person should visit at least once. The cultural and social benefits of such a diverse destination will never fade.

One thought on “New York City by City Escapes”

Share your thoughts on “New York City by City Escapes”