Posted on January 10th, 2012 by Brandi Lessner in Outposts

In Dubai, just about everything is meant to be the biggest and the best. And it’s no joke: Here you’ll find the world’s tallest building, the largest man-made islands, the richest horse race, the biggest shopping festival, and soon the most extensive entertainment complex, the most massive mall, and the biggest hotel.

People who live here will tell you that Dubai is always changing — that’s an understatement. Dubai is growing so fast that it hardly seems recognizable from one year to the next. The city’s only competition these days seems to be with itself. Who can keep up? Construction cranes everywhere work relentlessly to continue raising a modern metropolis out of the desert sand.

The Bastakiya neighborhood is a picture-perfect restoration of an early Arabian neighborhood, and a walk-through will give visitors a strong sense of Dubai’s history. Spend a little time walking or taking a boat along the creek, the city’s lifeline where dhows haul their traditional trade. Be sure to visit the Gold and Spice souks, where business is conducted in the same traditional way that Arabian markets have done for centuries.

The million-dollar Dubai Tennis Open event takes place at the tennis stadium at Dubai’s Aviation Club and includes top seeds at the men’s and women’s tournaments. Andy Roddick took the men’s title in 2008. This takes places in late February/early March.

The week-long Dubai International Film Festival is a cultural event in mid-December that showcases full-length feature movies, shorts and documentaries from around the world, with an emphasis on Arab cinema. The event continues to grow in prominence and takes place at venues across the city. 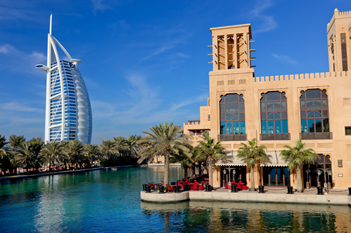 The massive Dubailand complex, which will be twice the size as Disney World, will have the largest collection of amusement parks in the world. These will include Six Flags Dubai, Universal Studios Dubai, Paramount Studios Theme Park, Dubai Snowdome and one of the world’s largest water parks, among many other entertainment, shopping, and sports attractions.

Dubai’s attractions are meant to impress. The fact that the indoor Ski Dubai was built is an accomplishment in its own right; that it’s located in one of the world’s hottest deserts almost exceeds imagination.

There’s no doubt about it: Dubai is a shopper’s paradise. One could argue that all of the international fashions offered here are available in London, New York or Milan, that Dubai actually isn’t any less expensive than elsewhere except for during a couple festival periods, and that if you’re really looking for authentic Middle Eastern goods, Dubai is hardly at the center of production and you’re better off elsewhere. But there’s something about shopping here that goes well beyond this being just a hot consumer market.

It sometimes seems the whole Dubai culture revolves around spending money. This is just as true for locals and expatriates as for visitors. Emiratis may be a minority in their own land, but you will see them en masse at the malls, since shopping is a favorite family pastime. In summer, the heavily air-conditioned shopping centers are among the only places people want to go, since it’s hot as Hades outside. So, the whole population ends up shopping through the summer, particularly during Dubai Summer Surprises, with only a marginal decrease come fall.

And then there’s Dubai Shopping Festival, the apex of the year-round shopping frenzy that grows larger year by year, as people pour into Dubai from all directions to fill their bags, get some sun, and return home with more photos but diminished savings.

The diversity of goods at the many fanciful malls, markets, stores, and shops is truly amazing, the result of Dubai’s heritage as an expanding center of trade. There are traditional souks selling everything from textiles and carpets to antiques, handicrafts, electronics, food, and spices. There’s Dubai’s world-famous Gold Souk, where skillful bargaining can lend you an excellent deal.

Dubai has come a long way in the last few years, when the breadth and quality of its restaurants remained limited. The city’s relentless growth has brought an explosion of restaurants of seemingly every cuisine type, ranging from European, Asian, and American to Latin, Middle Eastern, and African. With the expanded variety has come improved quality — so much so that Dubai is now able to attract the likes of award-winning chefs Gordon Ramsay and Gary Rhodes. Ironically, it’s difficult to find good Emirati cooking in Dubai, in large part because local food is bland when compared with that of, say, Lebanese or Moroccan. Don’t despair — if you’re looking for quality Arabic food, Dubai’s Lebanese and Moroccan restaurants are world-class.

Just as the diners at Dubai’s restaurants seem to come from every corner of the globe, so too does the staff. Service has improved markedly, but the limited English ability and lack of familiarity with Western tastes among some wait-staff means that service isn’t quite up to par with London or New York yet. Nevertheless, you can almost always get by with English, and most every restaurant offers an English menu. As you might expect, you’ll find a significant difference between the attention you receive at a five-star restaurant and a hole-in-the-wall establishment. But the latter are quickly disappearing, as Dubai positions itself as a regional hub and major world city. 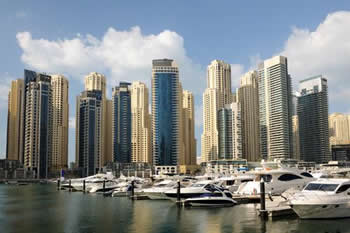 Lunch is generally served between noon and 3pm and dinner between 7pm and midnight. Emiratis often dine around 9pm, and restaurants are seldom crowded before then. You can usually find breakfast at more casual establishments. Most restaurants are open 7 days a week, although many serve only brunch on Friday, which is a weekend tradition here.

The city’s top restaurants lie inside hotels, for the simple reason that they’re by and large the only establishments that receive liquor licenses (public drinking is only allowed in hotel restaurants, bars, and clubs). You should always make a reservation for dining at hotel restaurants. Smart casual is the dress code for five-star establishments, and beachwear is only appropriate at casual Western-oriented venues in Jumeirah beach. Note that during the fasting month of Ramadan, most restaurants (with the exception of those in some international hotels) do not open until after sundown. There is also no live music or dancing during this period.

Crime is generally not a problem for travelers to the UAE. That said, you should not leave wallets, purses, or credit cards unattended. Pickpocketing has been reported in the souk areas. Although vehicle break-ins in the UAE are uncommon, travelers should ensure that unattended vehicles are locked and valuables are not left so they’re easily visible.

Traffic accidents are a leading cause of injury and death in the UAE. Drinking and driving is illegal no matter how little alcohol is consumed, and doing so will result in jail and stiff fines. Drinking in public places not licensed for alcohol will also result in fines. Drug importation, drug use, and even being involved in drugs by association will result in jail. Pornography is also illegal.

Women should face few safety concerns in Dubai. In contrast with some countries in the region, women enjoy the same rights as men and can dress as they please. However, some modesty in dress is preferred out of respect for the local culture.

In the local culture, it is considered impolite to show the soles of one’s shoes. Practically speaking, that means avoiding sitting in a way that results in the bottom of your shoes pointing at someone else. In the local culture, it’s also important not to eat or offer food or other items with the left hand, which is considered unclean. One should not take photographs of locals, particularly of women, without permission. Public displays of affection are considered taboo.