Luc Bereni was born in Corsica and has 27 years of experience in managing French airlines. He began his career in 1985 as an analyst at Air Inter; from there, he was promoted to executive assistant and then went on to head flight programs at Air Liberte and AOM French Airlines. He became Head of Commercial Operations at CCM Airlines in 2000 and in 2007 joined XL Airways as its Senior Vice President of Sales, Marketing and Flight Schedules. He is married with two children.

What has been your most memorable travel experience?

My first flight, a domestic one-hour journey onboard a Caravelle in 1974. Perfect weather. Absolute silence. A total discovery in terms of mobility, which I often think of when I am onboard a plane that’s about to take-off.

How did that influence your understanding or appreciation of travel?

Even though I was not quite conscious of it at the time – after all I was only 12 – I probably considered from that day on that only planes could connect the earth’s five continents quickly enough to make it reasonable for someone to aim at discovering all of them across the course of a lifetime.

What first inspired you to work in the airline industry ?

Being born on an island, Corsica, I have always been in contact with the world of transportation. When you live on an island, transport is as vital as water or bread. I naturally visited my region’s ports and airports from a very young age, where families came to greet those that had left the island. This atmosphere of sea and air travel fascinated for it represented no less than a bridge to the outside world.

We historically connect Paris to New York, Las Vegas and San Francisco. We also fly to Mexico, the Dominican republic or the Mediterranean islands of Corsica and Sicily. At the end of 2012, we opened 4 new routes to the French West Indies and the Indian ocean (Martinique, Guadeloupe, Mayotte, Reunion), which has kept us quite busy. 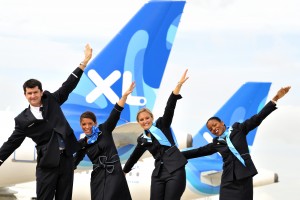 To focus on America, this is our fifth year of operation to/from the US and once again, we’re adding new flights and two new routes! Scheduled service resumes May or June depending on the city, but our flights are already available for sale. New York is our number one gateway with up to 6 flights weekly this summer to/from Paris, and 2 flights weekly to/from Marseille. Flights between Miami and Paris will commence June 28th, with 3 flights weekly. This will be the first time we fly to Florida and we are very excited about this opening! We will also resume our flights from Las Vegas and San Francisco to Paris, with 1 and 2 weekly flights respectively.

All things considered, Paris and Marseilles are relatively large markets that, we think, only suffer from one thing: the lack of sufficient capacity and reasonable fares during the peak season. Our arrival on those routes is therefore built as a response to an already very strong demand which cannot fully express itself due to the lack of direct flights and to soaring fares.

What makes XL Airways stand out from other airlines?

The promise of a seamless, quick and affordable journey.  Non-stop flights. Brand new Airbus A330, and a much appreciated service. All of that for what all players now agree to call the market’s lowest fares.

Is there anything recent / new for XL Airways you wish to share?

We announced the opening of our Paris CDG – Miami service in February, the first flight being scheduled for June 28th. To be honest, we were slightly worried due to the limited time window that gave us to sell these seats. As it turns out, our presence on other routes between the US and France has been strong enough to provide this new service with the required notoriety for it to be a success: sales trends are now strong enough for us to hope for profitability on this first season of operation.

How can travel agents book their clients on XL Airways France flights?

Our airline code is SE and travel agents can book tickets from any GDS. We’re also working on a US retail site, where payment in dollars will be accepted. If you don’t use a GDS to book or or would like more information, you may contact our representation in the US either by phone (+1-877-496-9889) or by email (xlairways_fr@apg-usa.us).