Posted on July 11th, 2013 by Lyn Edwin Cathey in Soundings

Question: What do stock market investors and travel agents have in common? Answer: They have both been jilted by Carnival.

It is clear that over the last few months the chickens have come home to roost. The line is now paying the price for some bad business decisions, plus a handful of well documented accidents (too often the result of bad operating policy). For all who have a stake in Carnival’s fortunes – agency owners and investors alike – it makes for a not-so-pretty picture.

Agencies selling CCL have taken a hit for several reasons – higher thresholds for over-rides making it more difficult to maintain top tier commission levels; expansion of the non-commissionable portion of already discounted, ridiculously low fares; policies that require agents to abandon the phones, forcing all bookings online as well as the resolution of all other issues. The net effect is an offloading of more and more work to travel agents for less and less commission.

An interview with a top Carnival producer in Texas revealed that the new commission thresholds make it a challenge to maintain a 1% over-ride when for decades 5% was achievable.

Investors holding CCL stock have taken a hit because…well, this chart says it all.

(The green then red line is the value of a share of CCL tracked since January. The thin gold line is the Dow Jones average over the same period.)

What is Carnival’s response to this hydra headed mess?

Well, they are going to have a ‘conversation’ with the agent community. We can safely assume that there will be a similar conversations targeted to investors.

This article brought to you by

(Here’s a suggestion for Carnival. Make sure those ‘senior sales executives’ featured in this roadshow have thoroughly read and practiced the exercises in this book – “Crucial Conversations”. There are going be some blunt questions asked, understandably with some emotion. I sense that the Carnival reps will need every bit of tact, social skill and conversational expertise they can muster to make this work out for all involved.) 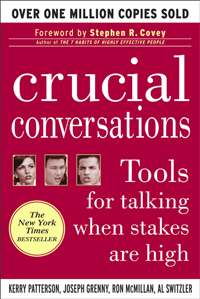 After many decades as CEO, Mickey Arison (son of Carnival founder Ted Arison) has either ‘stepped down’, been ‘fired’ or ‘pushed out’ depending on which news source is reporting. He will remain as chairman of the board.

Arnold Donald, the new CEO is from outside the cruise industry…way outside. Most recently on the board of directors for several relatively low profile companies, Donald previously enjoyed a 20 year career at Monsanto – a company not known for its stellar public relations. (Monsanto has actually been banned from doing business in some countries.)

Chris King writes in the Pittsburg Courier of July 1, 2013 – “this is a major step back into a corporate management role for (Donald) who has been somewhat on the sidelines in recent years”. In the same article, King states that Mr. Donald resides in St. Louis and has no plans to relocate.

So if I understand correctly, a semi-retired former top executive of a company with an abysmal PR record – with no travel trade experience of any kind – is going to steer the world’s largest cruise line back on course… apparently by remote control from a landlocked city? (Conclusion: This man must have played a key role in generating windfall profits for Monsanto, in spite of the bad PR.)

Could the return of Bob Dickenson as a consultant focusing on marketing, sales and distribution issues be a good thing for travel agents? Well, he was known for his strong support of the travel agency distribution system during his long tenure as president and CEO. Only time will tell if Dickenson can swing corporate policy (and culture) back in favor of agencies in any significant way.

Sorting through all of the recent interview rhetoric and spin from CCL executives relative to the Conversations roadshow – I found little more than variations on “we need to apologize and listen more” theme. However, there are some glimmers of real change for the better, if implemented. Example: a proposed plan to simplify what has become a very complex fare structure.

On that theme, Lynn Torrent, Executive Vice President of Sales, is recently quoted in Travel Weekly saying “Carnival used to be the easiest cruise line to book with and now we’re the most difficult. Simply put, we want to be easy to book again.”

Torrent also said “We’re committed not only to getting the message out but to taking the actions we need to take so that travel agents believe it.”

How many of you are planning to attend one of the Carnival Conversations roadshows?

Have you formulated any questions in advance? It would be great if we could all speak with one voice, but that may be a pipe dream.

Allow me to close with the irony of ironies. I noticed this ad today on LinkedIn’s job postings…under the Travel & Tourism heading.

Job description – We are seeking a highly motivated professional to support the execution and further development of the Company’s Enterprise Risk Management (ERM) program. The ERM program is designed to identify, assess, manage and report to senior management and the Board of Directors the most significant business and strategic risks faced by the Company.

Will this new-hire be on board in time to advise the executives participating in the Carnival Conversations roadshow?