Posted on September 24th, 2013 by Caroline Hughes in Outposts

Belize is still a relatively untapped tourist mecca. Replete with many natural attractions such as the climate, the Belizean Barrier Reef, over 1,000 offshore Cayes (islands), world class fishing, calm boating waters (many boats will head for the safety of Belize in a hurricane), scuba and snorkeling, river rafting,  jungle and wildlife reserves…the list never ends.

In addition to the immense natural wonders, Belize is home to many Mayan ruins and hosts the largest cave system in Central America.

Right now, Belize is struggling to support the numbers of arriving

tourists, especially by way of cruise ships. It does not have the resources to truly protect its sanctuaries and reserves and their inhabitants. And it doesn’t have the political will to stop the out of control coastal development.

Fortunately, Belizeans are environmentally aware and incredibly active. Thanks to their efforts, Belize offers many ways for travelers to lessen their footprint on this paradise.  You will find beach resorts powered by solar energy to jungle lodges built from reclaimed hardwoods. And if eco-tourism is on the agenda (and in Belize it is highly recommended), the licensed guides not only guide, but also educate about the dangers Belizeans face. Among the top threats are the frailty of their reef, the medicinal harvesting of their plants and the general threats to the habitat of the native jaguar. 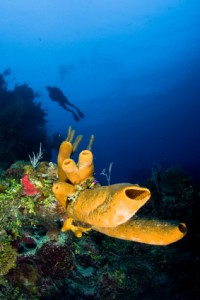 If you can read the icon that accompanies this article, Sub Umbra Florero is the motto on the Belizean flag. It pays homage to the mahogany tree, and means ‘Under the shade, I flourish.’ The mahogany is not as prevalent as it once was, but its loss has brought an understanding of its value to the people of this country. Belizeans, unlike many nations, recognize that their country’s greatest asset is their land and it must be respected and protected. They also realize that tourists have an important role to play as well.

It’s no wonder that Belizeans extend such a warm welcome to travelers. These easy-going people are eager to share their world. Visiting Belize will bring staggering scenery and if you can find one, take it all in under the shade of a mahogany tree and flourish.