Castles in the Air | TravelResearchOnline

Castles in the Air

Posted on October 27th, 2013 by Richard Earls in Publishers Corner

If you have built castles in the air, your work need not be lost; that is where they should be. Now put the foundations under them. ~ Henry David Thoreau

No doubt you have dreams for your travel practice. You want the passion you have for travel to communicate to others and to grow your business so that it will, some day, look as you have envisioned it.  You know you have the the will to succeed. Yet, there are times when the pace of the project and the obstacles seem overwhelming, when progress seems to slow to a halt and you seem unable to lift one more stone. It’s hard to go it alone.  Need some inspiration?  Meet Jim Bishop.

Jim is an iron worker.  His hands are very obviously those of a hard worker, knotted and rough.  That building behind him?  It’s a castle.  Jim built it.  By himself. 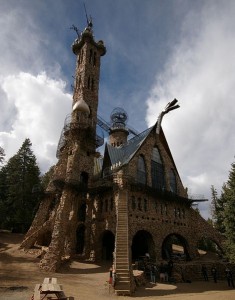 This picture is licensed under the Creative Commons Attribution-Share Alike 3.0 Unported license.

In the mountains of Colorado, about an hour west of Pueblo, stands a remarkable monument to perseverance, to one man’s vision.  Stone by stone, since 1969, Jim Bishop has been building a castle. He has not used any labor other than his own.  He has lifted every stone into place himself.  It is very likely his project is the largest one-man construction project ever.

Jim has met some real obstacles along the way including a series of fights with authorities over his project.  His son was killed in an accident on the site.  Still, Jim builds his castle.

Jim Bishop bought the 2 1/2 acres of land where the castle is located in 1959 when he was 15 years old. He started out building a family cabin.  The structure he built is a bit more than that. Its tallest tower reaches 165 feet into the air. Jim is eccentric (trust me),  and passionate (very).  You have the feeling that in some strange way if the castle could talk, it would do so with Jim’s voice – animated it would walk and talk like him, a perfect reflection of the man who built it. One man, some stone, a vision, perseverance – a castle.

Manifest your own dreams with Jim Bishop’s perseverance and nothing is impossible to you.

Now what was it you were saying about wanting to build your travel practice up a bit?

Posted in Publishers Corner | No Comments »
Tagged With:   dreams