Posted on January 29th, 2014 by Kelly Monaghan, CTC in Point-to-Point

There was a time when beleaguered travel agents could escape the slings and arrows flung their way by journalists by turning to the entertainment section. Not any more.

The New York Times’ Neil Genzlinger has brought the war on travel agents to his review of “Craving For Travel,” a play by Greg Edwards and Andy Sandberg, now playing at the Jay Sharp Theater in New York.

The headline says it all: “It’s Not Just a Job, It’s an Adventure. In a Dying Industry, Sure. But Still.”

Mr. Genzlinger admits that the play is graced by good performances from “two hard-working actors” (Thom Sesma and Michele Ragusa) playing multiple roles. “You have to admire their ability to keep all the characters straight and switch so quickly from one to another,” he says. And he even admits, if begrudgingly, “the gags, some of them even funny, are nonstop.” What’s more, his description of the piece makes it seem kind of fun: two luxury travel agents, once married now competitors, dealing with nutty customers –“a rich man wants to take the Intrepid Sea, Air & Space Museum for a spin around Manhattan”,  and wacky requests “a passport for a dog”. 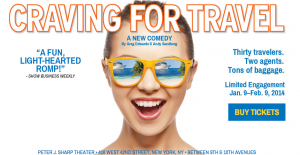 Now any critic is entitled to his opinion and, as an inveterate theatergoer, I’ve seen my share of stinkers. So if Mr. Genzlinger thinks a play is “a lightweight piece of twaddle” and “bearable, in a dinner theater sort of way,” that’s his prerogative.

But what really gets Mr Genzlinger’s dander up has less to do with the quality of the play, and more with its theme and its genesis.

“The play, a comedy, is about two travel agents, a description likely to draw the response: “Huh? There are still travel agents?” That reaction is why the play exists at all.” He huffs. “It was commissioned by Jim Strong, president of a travel services company in Dallas, and financed primarily by hospitality industry backers.”

Even worse, in Mr. Genzlinger’s estimation, is that the play “makes the two travel agent characters out to be both the busiest and the most heroic people on the planet.”

Heaven forefend! A play about travel agents?? And one that paints them in a positive light to boot! This is simply too much for a sensitive soul like Mr. Genzlinger to bear. Clearly, the writers of “Craving For Travel” would have fared better with the New York Times if that had taken a cue from David Mamet’s “Glengarry Glen Ross” and included dialog like, “So I told the blank blanking motherblanker that if he didn’t like the itinerary he could blank my blank!”

Even worse, the play is bankrolled by a travel agent. What a disgrace! That would be like Kelly Monaghan putting money into a revival of “Finian’s Rainbow.”

As for the “dying industry” crack in the headline, I can’t blame Mr. Genzlinger for that. Headlines are seldom, if ever, written by the writer of the article. But the slur perfectly reflects the tone of the review and the Times’ rather schizophrenic view of the travel industry.

First and foremost, Times’ journalists take it as gospel that travel agents, as a profession, are in the same category as elevator operators (a comparison Mr. Genzlinger actually makes). Second, everybody books his or her travel on the Internet.

The result is that Joe Sharkey’s weekly “Itineraries” column, which chronicles the travails of business travelers spending hours on hold trying to rebook cheap seats on cancelled flights, shares a page with an article extolling the delights of $5,000-a-night hotel suites. Where is the column about staying in cheap motels and flophouses after spending an hour on line sussing out the cheapest rate? And even though these same journalists insist that, in the Internet age, no one needs to turn to an expert when choosing a vacation destination, the New York Times persists in publishing a weekly Travel section filled with just such advice.

In the zany world of the New York Times, apparently everyone can afford a $3,000 dress or a $5,000 suit, but no one can afford a $40 fee to have an expert book their airline ticket and assist them when weather puts the kibosh on their itinerary.

It would be ungracious of me to point out that Mr. Genzlinger himself works in what many are calling a dying industry – print journalism – but let me do it anyway. Why should anyone pay good money for the New York Times to read Mr. Genzlinger’s thoughts when they can go on the Internet and read dozens of reviews for free?

Even better, they can go directly to the supplier of “Craving For Travel” at cravingfortravel.com. After all, isn’t that what the Times advises its readers to do when booking travel?

I urge all travel agents within hailing distance of the Big Apple to see this show before it closes on February 9. You can order tickets via the play’s website.

If you’re there on Saturday night, February 1, look for me. I’ll be the one giving the play a standing ovation.

Kelly Monaghan, CTC, is a writer and publisher who has been covering the home-based travel agent scene since 1994. Prior to his entry into the travel industry he was a sales trainer for major companies such as AT&T, Arrow Electronics, and Brinks and wrote widely on sales and marketing for a number of professional publications. HisHome-Based Travel Agent Success Course  has been endorsed by OSSN and The Travel Institute. His publishing company, The Intrepid Traveler  specializes in Orlando area attractions and offers discounts to travel agents who wish to use its guides as gifts or premiums.