“I’ve only seen this once before,” said Frank Neumann, hotel director of Hapag-Lloyd Cruises’ Europa 2. He was referring to the magic happening over our heads as we zipped around the harbor in Syracuse, Sicily, on Zodiacs photographing Europa 2 at anchor. 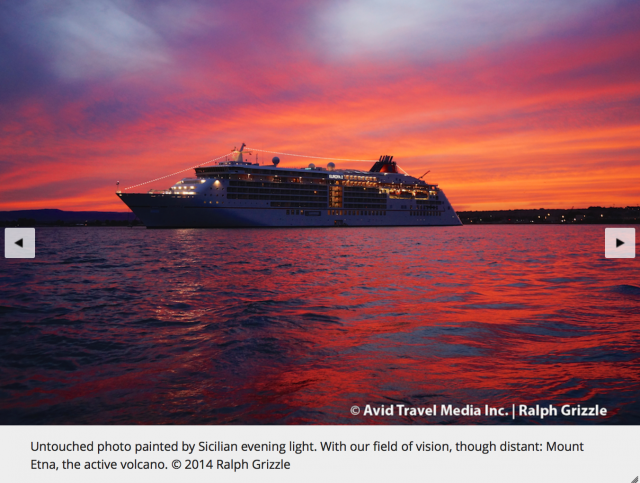 Set against a backdrop that could have come straight out of a Disney animation, Europa 2 reflected the hues of a Sicilian sky that was displaying ever-changing shades of red, from pink rose petals to blood red veins. Adding to the drama: In the distance, plumes of smoke streamed skyward from the active volcano Mount Etna, her opaque conical shape barely visible 110 kilometers (about 60 miles) away.

Frank told us he had last seen a similar sky in the Northwest Passage, where the German cruise company operates expedition vessels.

Our cameras were hard at work this evening. There were four of us on board with Frank, and another group of journalists in a second Zodiac. It wasn’t hard to get a dramatic photo. Just compose and shoot.

After an hour of shooting, a surprise. We made a beeline to two other Zodiacs in the distance. As we approached, I heard “The Sunny Side of the Street” being played on saxophone. The person playing: one of the crew members. Two other crew members waved to us. One was holding a tray of glasses filled with champagne.

As we approached, they steadied our Zodiacs and handed over glasses of champagne. A toast to one of the most memorable evenings that any of us will ever experience.

The sun was beginning to set on the horizon, and the beauty was simply breathtaking. “This only happens once in a decade,” Frank said. And we had the privilege of being there to witness it.

Share your thoughts on “Stunning Photos From Sicily: Photographing Europa 2 At Sunset”