Explore Riga, Latvia with Trans Am

Posted on September 9th, 2014 by Sydney Smith in Outposts

The “gem of the Baltics”, as some call it, Riga’s medieval charm mixed with modern day flare makes it a truly remarkable tourist destination. Currently holding the title of European Capital of Culture 2014, this city is rich in ancient history and cultural heritage.

Despite the fact this magnificent city is more than 800 years old, Riga is a modern European capital with exquisite architecture, trendy cafes, year-round festivals, and multiple shopping districts. Yet, the city itself still has remnants of the past. 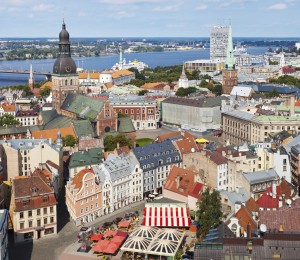 The city of Riga

Riga was founded in 1201 by Albert of Bremen as a home base for the Northern Crusades. The city traditionally served as crossroad for trade and business between the East and the West. Along the way, the Germans, who had inhabited the city since Albert’s establishment, became the elite and maintained that power through most of Riga’s history, while the Latvians remained a lower class. Much of the German influence can be seen in the architecture that surrounds the city.

During World War II much of Riga was bombed and the ruins were mostly left to decay until the government began to invest in reconstructing and restoring the old buildings for the possible profits of tourism to the city. Because of this, Riga has one of the most complete old towns in Europe.

There is a countless number of landmarks to see while in Latvia’s capital. A few of the historical, “must-see” attractions include the Riga Castle, St Peters Church, and the Dome Cathedral. One-third of the city centre is built in the Art Nouveau style, and perfect examples of this brilliant architecture can be seen on Elizabetes and Alberta Streets.

Like music? The pride of Latvia’s cultural and musical life is the National Opera, located by the city canal. Having been recently renovated in 1995, the interior is finely decorated while the exterior resembles Moscow Bolshoi Theatre.

The Freedom Monument, a major landmark and a symbol of Latvian independence, can be seen from most areas in the city. Built to the Guild of Unmarried Merchants in the 14th century, the House of Blackheads is another historical feature of Latvian tourism. After being bombed in World War II, a replica of the building was built in 1999 with a magnificent Dutch Renaissance facade and beautiful ceiling paintings. 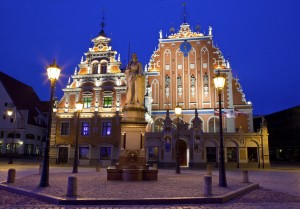 Besides ancient history, Riga also is rich in culture and has many opportunities for tourists to experience it’s city has to offer. Want to enjoy some outdoor activities? Riga has everything from canoe trips, husky dog sledding, and paintball to cable car bungee jumping, AK-47 shooting, and bobsledding. The city has many organized tours, including biking, walking, art, and museum tours.

The Central Market is great for fresh produce and souvenirs. If you are looking to shop, Taste Latvia has great clothing and home ware options with unique, Latvian contemporary designs. Stockmann, a branch of the Finnish department store, is another popular among tourists.

In the mood for distinctive Latvian cuisine? Try Tinto. Sitting next to one of the most historic baroque theaters in Europe, its heavenly modern cuisine is complemented by its extensive list of over 200 wines from 16 countries, making it a worthwhile experience. Another favorite spot among locals is Garāža. With its unique decor and garage-like charm, Garāža offers its guests the experience of enjoying great meals while sitting in antique Ford seats.

Riga holds nothing back when it comes to experience and Transam can take you there!

Share your thoughts on “Explore Riga, Latvia with Trans Am”