Cruises, airplanes, and the Ebola scare

Posted on October 20th, 2014 by John Frenaye in Editorial Musings

And just like that, panic starts its slow creep into the psyche of the traveler.  As I said last week, the risk of an every day traveler contracting the Ebola virus is near zero.  It still is nearly impossible for the average traveler to contract it and I stand by my original assertion—however non-medically backed it may be!

But this past week, we saw failures in the Centers for Disease Control (CDC) that leaves me wondering if Ebola has the potential to become the epidemic the media has portrayed due to the sheer ineptness of the people charged with protecting and preventing it in the first place.

On October 15th, we learned that a nurse who had treated the one person who had died from Ebola flew a commercial plane with a low-grade fever.  Again, there was a very minute chance of infecting others on the plane, but you just don’t take those chances.  And the nurse knew it.  So she called the CDC multiple times and said it was fine!

Then on October 17th, it was reported that a technician that had handled some specimens from the Ebola victim was on board the Carnival Magic.  The CDC advised Carnival that their guest may have been exposed to Ebola and the guest was voluntarily quarantined.  The solution was to fly the guest home from Belize, but the nation refused entry to the ship.  Similarly, Mexico refused entry to the ship when it attempted to dock in Cozumel.  The solution was to return to Galveston where the Carnival Magic is home ported. 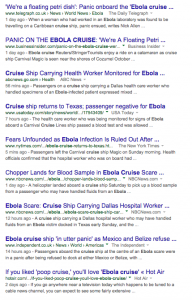 Thankfully neither individual has shown any further signs of infection, but the question remains how are the infectious disease policies so lax? And how is it that the CDC seemingly is changing the rules as they go? The nurse can fly they said; but afterwards said that she should not have flown.  Did they not tell the healthcare workers that they should be on the lookout (and remain in the area) for an incubation period?

But due to the incompetence of the CDC—the very people we rely on for life and death advice, the media is moving forward with the message that you might get Ebola if you fly or take a cruise.  Granted it is not that blatant, but just Google “Ebola+cruise” and see what you get.

And while the government determines if there is a problem and what to do with it, we are left holding the travel bag having to assure our clients that despite everything they have heard, their vacation is likely very safe and uneventful. But how does “just a travel agent” do that when the likes of every news organization is working against us?

It’s an uphill battle, and likely will continue to be. We need to be able to present factual information from vetted sources to our clients. Of course, they ultimately will make the decision.  And perhaps the best advice and reassurance we can give our clients is to purchase travel insurance. Several travel insurance providers have released statements on coverages and for the most part, clients can be very well protected.  Hang on folks, I have a suspicion that this will be getting worse before it gets better and all we can do it keep providing our clients with accurate information.

Share your thoughts on “Cruises, airplanes, and the Ebola scare”