Quantum of the Seas Live Report-Day 1: In a Word, Wow! | TravelResearchOnline

Quantum of the Seas Live Report-Day 1: In a Word, Wow!

Posted on November 14th, 2014 by Ralph Grizzle in Deck Plans

I had my doubts about Royal Caribbean’s new Quantum of the Seas. I really did. When someone promises they’re going to serve the moon up to you on a platter – even if it’s one of the most successful cruise lines on the planet – I tend to be skeptical. And there were promises aplenty: ten-minute check-in. The fastest internet at sea. Revolutionary new amenities. Plugged-in components. 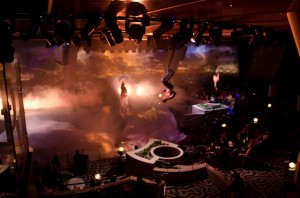 Royal Caribbean has done it again with Quantum of the Seas. Shown here is a scene from Starwater, one of the minboggling production shows at Two70. Photo © 2014 Aaron Saunders

Amazingly, in Quantum of the Seas, Royal Caribbean has designed a ship that makes its existing fleet look positively frumpy. If there’s a single downside to Quantum, it’s that she’s so innovative she’s prematurely aged the Royal Caribbean fleet by ten years. 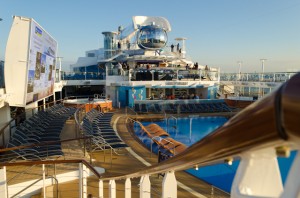 Hello, Quantum of the Seas! The view from between Decks 15 and 14, facing the North Star. Photo © 2014 Aaron Saunders

I arrived at the new Cape Liberty Cruise Terminal just after Noon. It’s a colossal improvement over the old “tent-and-building structure” that was just horrifying. If you hated the shuttle bus ride as much as I did, good news: It’s ancient history now, replaced with a modern terminal that has – gasp! – tide-sensing gangways.

While check-in wasn’t quite the ten-minute-wonder Royal Caribbean had promised, it was among the fastest I’ve experienced on any large mainstream ship, clocking in at 26.5 minutes from start to finish. Which is darn good. I should point out that I had problems checking in online, and that the time listed includes the time for the pier-side staff to check me in. Your mileage may vary. 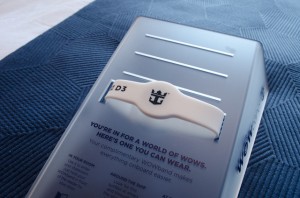 You can access your stateroom with the traditional keycard or with the new RFID WOWband. Photo © 2014 Aaron Saunders

Once onboard – oh my. This is one gorgeous ship. Quantum of the Seas is a colossal improvement over the Voyager and Freedom-class vessels. She is representative of the new Royal Caribbean, and almost no trace of the ‘old’ Royal Caribbean is present. The entire styling and décor of this ship is unlike anything that has come before her. The Royal Caribbean trademarks of the 1980s and 1990s – the curved staircases, Viking Crown Lounge, marble surfaces – are all gone, replaced instead with an elegant, modern look that wouldn’t be out of place in a fine hotel. 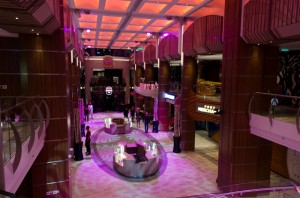 The first thing most guests will see aboard Quantum of the Seas is the Royal Esplanade that spans Decks 4 and 5. Photo © 2014 Aaron Saunders

Initially, I was concerned that Quantum of the Seas would suffer from a disconnect from the ocean, but that simply isn’t the case. While she still doesn’t boast as many windows as I’d like to see in her public rooms, she’s far more connected with the sea than the Voyager and Freedom class cruise ships. Windows line nearly every venue, and if there aren’t windows near your favorite watering hole (hello, Schooner Bar), clever lighting helps to mimic daylight outside.

Without further ado, let’s take a look at Quantum of the Seas! 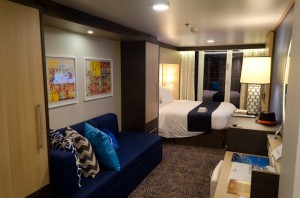 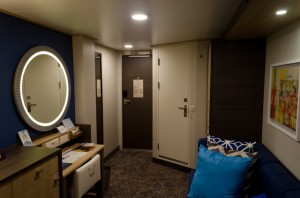 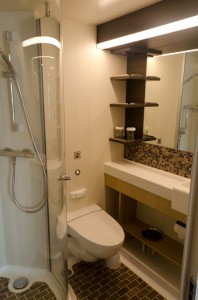 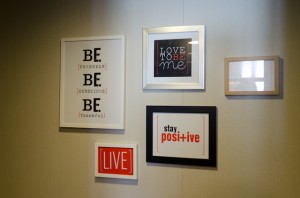 Come along with me! Right outside my stateroom door – some inspirational messages. Photo © 2014 Aaron Saunders

Our Live Voyage Report aboard Royal Caribbean’s new Quantum of the Seas continues tomorrow with an extensive look at this fabulous ship as we sail the Atlantic Ocean! Be sure to follow along on twitter by following the hashtag #LiveVoyageReport.

Share your thoughts on “Quantum of the Seas Live Report-Day 1: In a Word, Wow!”