Posted on November 13th, 2014 by Sydney Smith in Departures

With so many nicknames, like “Daughter of the Baltic” and “miniature St. Petersburg”, it is hard to imagine one place could account for such a variety of traits and characteristics. Founded in 1550, Helsinki, Finland has developed into a thriving modern city and a major European destination, offering tourists rich history, a variety of culture, and beautiful landscapes.

A city wearing many different hats, Helsinki pulls off being a modern-day metropolis, while still maintaining its small town charm. Helsinki was founded by King Gustav Vasa of Sweden, whose intentions were to develop the city as a trading post to compete with Tallin to the south of Estonia. Although the development was slow, the city later became the capital of Finland and was rebuilt to reflect an Empire style. Today, much of Helsinki reflects influences from both Western and Eastern cultures, seen around the Lutheran Cathedral. The same architects and style of architecture featured here are also parts of St. Petersburg’s history–hints, the nickname! 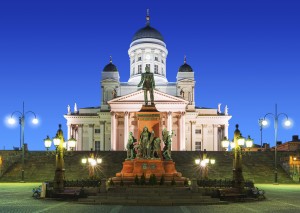 After you’ve checked off your list the Lutheran Cathedral and Senate Square (featured left), there are a few other landmarks unique to Helsinki worth a visit. Suomenlinna, built by the Swedish in the mid-1700s, was once the greatest sea fortress in the Baltic. Here, visitors can still see remanents of the past integrated into present day. While also being a museum, Suomenlinna is home to fewer than a thousand inhabitants and features several restaurants, cafes, theaters, and museums.

Speaking of museums, Helsinki boasts just as much architectural design on the outside of its buildings as the many works featured inside. The Ateneum Art Museum is considered one of the most nationally significant art museums and houses the largest collection of paintings and sculptures in Finland. The National Museum of Finland promotes a time-trip back through the history of Finland, exploring from the prehistoric times to the present-day through temporary exhibitions and major archeological finds.

Finlandia Hall is also a major landmark to see. Designed by Finland’s best known architect, Alvar Aalto, and located across the street from the National Museum, the marble Finlandia Hall is a popular congress and concert venue in Helsinki. The building, itself, is a wonder to be seen, and guided tours are made available daily to visitors wanting to get a closer look.

For those looking for a great view of the city, check out the Olympic Tower in Olympic Stadium, which sits at 72m high (14 stories).

One of the best ways to explore the city is on the old vintage tram ride, which departs from the Market Square and takes you on a 20-minute tour around the city.

Another great view of the city is at the iconic Linnanmäki amusement park. Enjoy any of the 43 different rides, or explore the many arcades, restaurants, and outdoor performances, while also seeing Helsinki from a different perspective.

Depending on what time of the year you choose to visit Helsinki, there are a variety of different festivals and celebrations for visitors to experience. The Lux Helsinki is an annual light installation event aimed at cheering up residents and visitors during one of the darkest parts of the year. Another fun and unique festival is Vappu, an excuse for students to wear brightly colored overalls and drink vast amounts of alcohol. At 6PM on Apr 30, the statue of Havis Amanda at the Market Square is crowned with a student’s cap and the revelry begins in the streets.The party continues through the night and into the next morning where participants head to Kaivopuisto Park for a champagne picnic.

Aside from the local traditions and festivities, Helsinki also serves the laid-back traveler. There are many saunas throughout the city that visitors can enjoy if they’re in need of a little quiet time and relaxation. Aleksanterinkatu, which runs from Senate Square to Mannerheimintie, is Helsinki’s main shopping street and features various shops, including the largest department store in Scandinavia. There are various markets and halls throughout the city offering local produce and handcrafted treasures, including Hakaniemi Market Hall (Hakaniemen kauppahalli) and Hakaniemi Open-Air Market.

Hungry? The best time to eat out in Finland is during lunch time when the prices are budget friendly. The Unicafe is a chain of restaurants owned by Helsinki University located throughout the city, featuring various different menu options for cheap, including vegetarian. For more of a local taste, try Bar No 9, Chilli, Golden tax, and La Famiglia.

Helsinki offers an abundant of unique experiences for any traveler wanting to visit a diverse city.

Share your thoughts on “Travel Helsinki, Finland with TransAm Travel”