Posted on December 11th, 2014 by Ralph Grizzle in Deck Plans

“I’ve stepped on all six continents!” Um, make that seven.

I love the story that Seabourn Quest’s Expedition Team Leader Robin West tells about the guest who stepped off the Zodiac onto the mainland of Antarctica (versus the islands we’ve been visiting until today). With his feet firmly planted, the guest confidently proclaimed that he had conquered all six continents. His enthusiasm trumped his faulty math, however, and indeed, he had achieved something that many of us aspire to achieve.

Certainly, having collected all seven continents comes as a badge of honor for intrepid travelers, and today, we had the opportunity to have our passports symbolically stamped by Chilean authorities as proof that we had touched Antarctic earth (or ice), continent number seven for many of us. 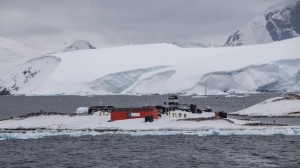 Our landing today took us to the Gonzalez Videla Base at Waterboat Point in Paradise Bay. © 2014 Yuriy Rzhemovskiy for Avid Travel Media Inc.

Our destination for the morning was Waterboat Point, where an “inactive” Chilean station is manned during the summer in what appears to be part supply station and part tourist center. It’s the only place in two visits to Antarctica that I’ve seen a shopping bag. A guest proudly clutched hers, full of Christmas gifts that she had purchased at the museum, as she passed me and a group of penguins. And why wouldn’t you shop in one of the only places in Antarctica that you could do so? Who among us can say that we have purchased gifts for loved ones at a museum situated well below latitude 60°S?

For the better part of 90 minutes, we wandered the station and talked with some of the officials who were stationed there. They were welcoming and helpful, assisting guests up and down steps carved from the ice and snow and greeting folks with “Buenos dias,” and other Spanish phrases. 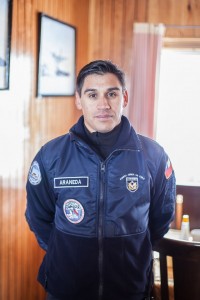 I was impressed by the penguins at Waterboat Point and the contrasts of their rookeries against the snow. Yes, that’s penguin poo that makes the ground beneath the rookeries brown, and as you might suspect, the rookeries can be quite smelly when you are caught downwind. The palette of colors, limited as they may have been, gave the landscape an otherworldly hue, almost sepia-like, as you can see in the following photos. 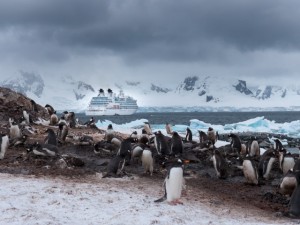 Seabourn Quest holds its position in Paradise Bay as guests zip along in Zodiacs between the ship and shore all morning long. @ 2014 Ralph Grizzle

We snapped a few hundred photos, then returned to Seabourn Quest for warm mugs of hot cocoa and a nourishing lunch at the Colonnade. As we were dining, the sun broke through the clouds, and everyone on board headed out onto the expansive open decks to enjoy the beauty of Paradise Bay and the warming sun on their faces. 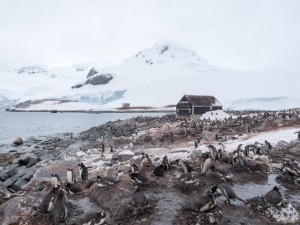 Three days ago, when we first stepped ashore in the Antarctic Peninsula, I heard a guest remark: “Nothing prepared me for this. None of the videos or photos or anything that I had read.” There is a hint of truth in her sentiment. Nothing can prepare you for the pristine grandeur of Antarctica, and we were witnessing that beauty today on the open decks as waiters proffered glasses of champagne and cups of hot cocoa. The platform that Seabourn provides for this type of exploration matches the epic experience that Antarctica serves up.

Last night, I had stood on the open deck at 1 a.m. A pale light illuminated the sea and the distant snow-covered mountains. It seemed as if I could see forever, and yet, not a soul stirred beyond the wake of the ship. At 6’5″, I felt small.

Antarctica has diminished me physically, yet enlarged me spiritually. It is hard to find words or photos to fully convey the experience, but I am changed in ways that I have not yet identified. Even though we have television and internet access, the world down here is far away from the busy, bustling world that exists between the extreme latitudes.

I can see why expedition leaders repeat Antarctica season after season. Crossing the Drake Passage multiple times doesn’t even factor into their experiences — they don’t care what Mother Nature throws at them. Getting to this place is worth enduring whatever it takes. There is something about this place that beckons to all of us — that makes us want to return time and again. Small wonder that the expedition members confess to being Polar Addicts. 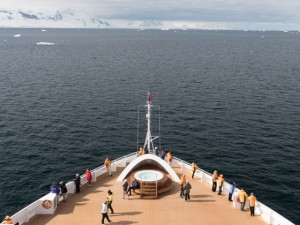 Guests headed to the outer decks to enjoy a beautiful afternoon in Paradise Bay. @ 2014 Ralph Grizzle

West, the expedition team leader, organized a Zodiac for us to photograph Seabourn Quest under sail. At around 5 p.m., two photographers, me and my colleagues, a couple of expedition members and the Seabourn fleet captain, bundled up and zipped out to sea.

The experience was absolutely exhilarating as we sped along to maintain a course ahead of the ship, which was doing 12 knots.

We spent 75 minutes in the Zodiac chasing Seabourn Quest. The time passed so quickly that we were all surprised to hear that we had been out and in the elements for more than an hour. “If all of life happened that fast,” I joked, “I’d be dead by now.” I suppose it is true that time does fly when you’re having fun. 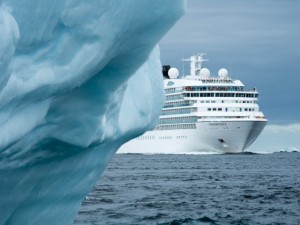 When we finished our Zodiac tour and after I had showered, I headed up to the Observation Bar to enjoy conversation with other guests over a glass of champagne. John, one of the expedition team members, pointed in the direction of Palmer Station, a U.S. research station where he once worked.

He told the story of how one night, the Americans who worked there were having dinner when they heard a knock at the door. A visitor had traveled by Zodiac, alone, for the better part of the day from the Ukrainian research station (Vernadsky Research Base) to reach his American neighbors. He was inebriated.

What could they do but feed him and put him to bed so that he could sleep off the drink? The next morning, the Ukrainian woke up, had a cup of coffee and a small breakfast, then made his way back to his Zodiac. A favor, he asked. Could be borrow some gas? He had exhausted his tank getting to Palmer Station and had no reserve. Who could imagine doing such a thing is such a vast and unforgiving place?

We, on the other hand, were on board a beautiful vessel with plenty of fuel, pushing our way deeper into the magic that is Antarctica, a place that for many of us is the last continent and the one that moves us most of all. 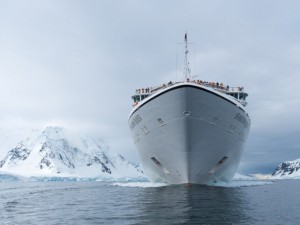 Seabourn Quest headed deeper into Antarctica as we continue our voyage. @ 2014 Ralph Grizzle 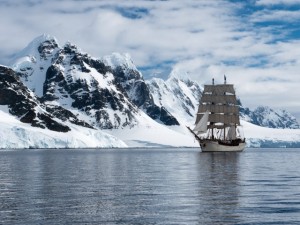 We were not alone. Spotted during our evening transit, a Dutch sailing ship, Europa. @ 2014 Ralph Grizzle

Share your thoughts on “All Continents Conquered: Seabourn Quest’s Guests Step Ashore On The Antarctic Mainland”