Headed Toward Adventure, A Stormy Night On Seabourn Quest En Route To Antarctica

Posted on December 4th, 2014 by Ralph Grizzle in Deck Plans

Cruising to Antarctica is full of adrenaline-filled adventure. Typically, the adventure begins with the crossing of the Drake Passage, a notoriously nasty stretch of water where Mother Nature can — and often does — release her wrath. 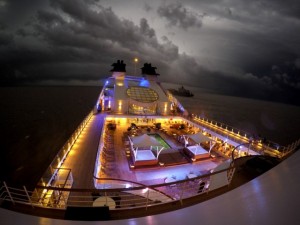 A dark and stormy night as Seabourn Quest sails from Buenos Aires to Montevideo. An omen of things to come as we begin our Antarctic adventure? © 2014 Chris Stanley

Our adventure on Seabourn Quest started nearly 1,000 miles north of the Drake Passage, on the night we left Buenos Aires. During dinner outdoors at the Colonnade (one of four restaurants on Seabourn Quest), we watched as lightning streaked the sky. The electrical discharge was so intense, and so awe-inspiringly beautiful, that we felt like applauding after each thunderbolt.

When I returned to my suite later, my room stewardess, a South African named Natalie Drake (a fitting name for sure), remarked upon the beauty of the night sky. She said she was headed to the exterior decks right after her shift to attempt a few photographs. We were one step ahead of her. We grabbed our cameras and bee-lined it to an alcove on deck nine to photograph ship and sky.

The spectacle of nature was absolutely beautiful as flashes of light silhouetted Seabourn Quest. Soon after we set up our cameras, however, the wind picked up and rain spattered the open decks. The wind became stronger and stronger, reaching gale force and whipping sheets of rain horizontally. We were mostly sheltered from the rain but caught in the storm nonetheless. The only way out was to brave the elements, descending a few stairs to seek refuge inside.

Only a few seconds of exposure on those stairs, and our clothes were soaking wet. Mother Nature had reminded that she can be both fickle and fierce, and for three wet sailors, she had set the tone for our Antarctic adventure.

Follow our adventure to Antarctica this week here on avidcruiser.com.

Share your thoughts on “Headed Toward Adventure, A Stormy Night On Seabourn Quest En Route To Antarctica”