Shopping On The White Continent, Yes Really: Antarctica Explored, A Photo A Day

Posted on January 23rd, 2015 by Ralph Grizzle in Deck Plans

There is life in Antarctica, human life. In fact, the population of Antarctica ranges from about 1,000 people to 5,000 people throughout the year. They work at research stations, some of which cruise ships visit. On one day of our voyage, Seabourn Quest anchored within sight of the González Videla Base, a Chilean Research Station on the Antarctic mainland’s Waterboat Point in Paradise Bay. 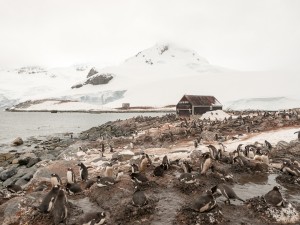 The Chileans who man the station are polite and welcoming. Perhaps one reason that they are so welcoming is that they are invited on Seabourn Quest for lunch. They do so in rotation, via Zodiacs, so that there are always plenty of people at the base to assist tourists.

The Chilean researchers invite tourists to admire the penguins and to tour the station, including the researchers’ living quarters. There’s even a museum and a gift shop, where, yes, you can spend money. I saw one of our fellow guests clutching a bag full of items that she had purchased for Christmas gifts. I can imagine her back home as her friends and family unwrap their gifts, “You won’t believe where I found this.” And indeed, they would not.

The last thing anyone could imagine when planning a trip to Antarctica is that they might wind up doing a little shopping. One man, perhaps he had consumed too much wine at lunch, actually asked if there was an ATM machine nearby. It would have been an appropriate question nearly anywhere else on the planet, but not only was he in one of the most remote regions of the world but also among people who only spoke Spanish. “Que?” asked one of the research station staffers, squinting his face as if that would help him understand the question. I politely interjected, “No, no ATMs here. The closest one is 600 miles away, back in Ushuaia. Need a lift?”

What was here: lots of penguins. We had seen plenty already, but they were still as adorable as ever and fun to watch. It is hard to imagine ever tiring of watching penguins. They are like the icing on the cake; the cake, of course, being Antarctica.

Share your thoughts on “Shopping On The White Continent, Yes Really: Antarctica Explored, A Photo A Day”