Posted on February 20th, 2015 by Ralph Grizzle in Deck Plans

The strange weather that has followed Carnival Cruise Line’s Carnival Freedom throughout our Western Caribbean itinerary from Galveston shows no signs of letting up. Last night, guests were advised that our arrival and departure time for our port of call in Cozumel, Mexico today would be changing. 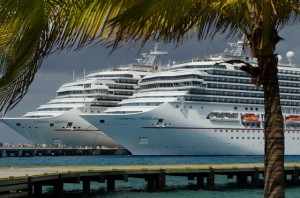 Rather than arriving at 8:00 a.m. and staying until 4:00 p.m., we would now be arriving at 7:00 a.m. and departing at 3:00 p.m. in order to avoid an expected storm front with high winds later this afternoon. Fortunately, none of the 55 different shore excursions scheduled for today were cancelled, though a few had to be modified ever so slightly to reflect the ship’s earlier departure time. 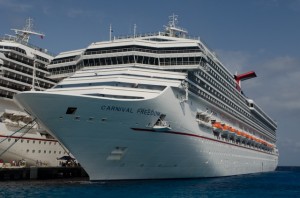 I’ve been to Cozumel once before, in January of 2009. And it’s an okay little town; if anything, it suffers from a bad case of Touristas: the place is just jam-packed with cruise ship visitors and resort guests. Even today, we’re joined by Carnival Liberty, Carnival Elation, Vision of the Seas, and another Carnival Fantasy-class ship that is too far away to see.

I disembarked Carnival Freedom around ten this morning with every intention of taking a taxi into town…and after taking some photos of the ship, I went back onboard. 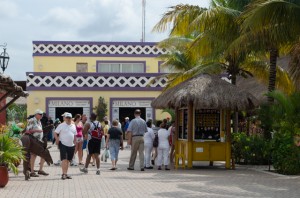 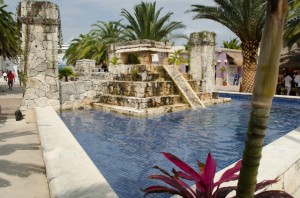 ..that plays to every Mexican stereotype. But, people love it, so who am I to say? Photo © 2015 Aaron Saunders 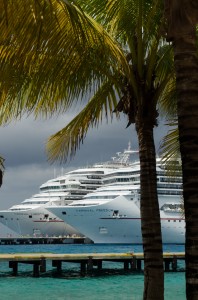 The port area was like running the gauntlet; nothing but duty-free beers, cologne, liquor, cigarettes and pills, and thousands of people clambering all over themselves to get to it.

Yet, at the end of the pier is the Carnival Freedom looking all resplendent in the Caribbean sun. Resplendent, and very deserted. 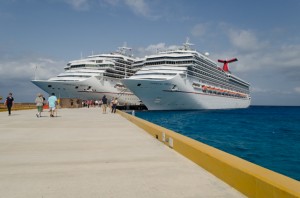 The port area was like running the gauntlet; nothing but duty-free beers, cologne, liquor, cigarettes and pills, and thousands of people clambering all over themselves to get to it.
Yet, at the end of the pier is the Carnival Freedom looking all resplendent in the Caribbean sun. Resplendent, and very deserted.

If you’ve never tried staying onboard during a port of call, it’s worth giving it a whirl. Maybe 100 people stayed onboard, and I found it relaxing and just what the doctor ordered.

Now, obviously don’t stay onboard if you’ve never been to the port before, or if you’re docked somewhere jaw-dropping like Venice. Otherwise…it’s a great day to hit the spa! 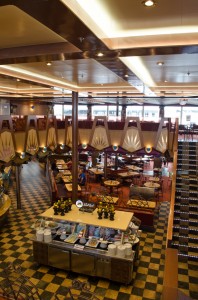 Even the lido buffet is wonderfully deserted on port days. Photo © 2015 Aaron Saunders

Since I’m back onboard, this is a great time to talk a little more about the real star of this cruise: the Carnival Freedom. I realize I’ve barely covered my stateroom, so let’s have a peek there first! 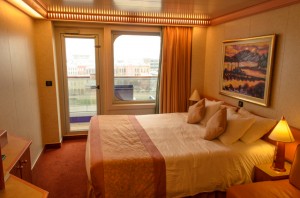 My stateroom is a Category 8C Balcony Stateroom located on a Deck 7. By and large, all the balcony staterooms aboard Carnival Freedom are identical; sub-categories are differentiated only by their physical location on the ship.

These rooms feature a queen-sized bed that can be split into two twins if required, along with a large couch sitting area, a table, a vanity that doubles as a desk, three closets, a mini-bar, flat-panel television, a bathroom and of course a private balcony. 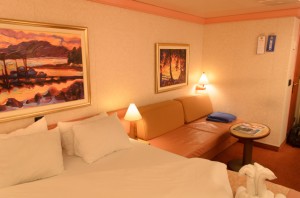 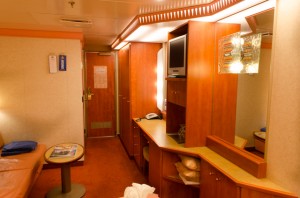 The room is comfortable and well-designed, though I will admit to not being a fan of the pink accents that surround the lighting, or the sorbet-coloured couch.

Just when you do become acclimated to the South Beach Pink, you open the bathroom door and Bam! You’re in a sea of teals and greens. 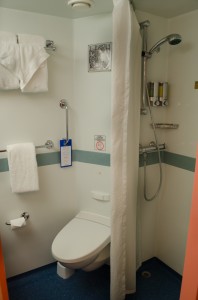