Embark On A Trip to Copenhagen with Transam Travel | TravelResearchOnline

Embark On A Trip to Copenhagen with Transam Travel

Posted on February 3rd, 2015 by Sydney Smith in Outposts

Commonly referred to as the world’s “most livable city”, Copenhagen, Denmark’s old world charm coupled with its progressive qualities as a true cosmopolitan city make it a sought-out destination for tourists. The city is a pocket-sized fairytale mixed with innovation—from castles and palaces, to wondrous buildings and creatively-designed architecture, Copenhagen is large enough to be seen as a major metropolis, yet small enough to feel intimate and timeless.

Things to See & Do 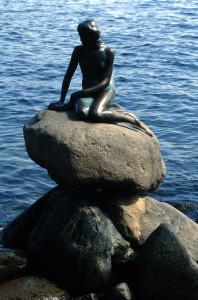 With the best in design, architecture, and fashion, as well as quickly becoming a culinary hot spot, it is easy to see why Copenhagen is crawling with tourists every year. Visitors are mesmerized by the cobble stone streets, intelligent infrastructure, winding canals, historical landmarks, abundant shopping, innovative cuisine and much more.

There are dozens of art and history museums throughout the city, with a few of the most popular being The National Gallery of Denmark, Ny Carlsberg Glyptotek or The National Museum.  Discover Danish’s Viking heritage at the Frederikssund Viking Village or visit the Royal Family at Amalienborg Palace and retrace the history of the Danish monarchy.

One of Copenhagen’s most iconic features is the statue of The Little Mermaid at Langelinje Pier. Unveiled on 23 August 1913, The Little Mermaid was a gift from Danish brewer Carl Jacobsen to the City of Copenhagen, symbolizing the fairy tale about a mermaid who gives up everything to be united with a young, handsome prince on land. A trip to Copenhagen isn’t complete without a picture with the legendary Little Mermaid.

If you have a few days in the city, make sure to visit Freetown Christiania, a carefree neighborhood established by a hippie group in 1971 who occupied an abandoned military barrack and established their own set of rules independent of the Danish government. Explore the colorful homemade houses, workshops, art galleries, music venues and organic eateries, and get a glimpse into why this area is so unique to Danish culture. 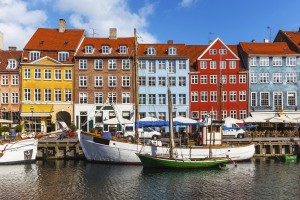 Whether you’re traveling with children or just a kid at heart, a trip to the Tivoli Gardens amusement park is a “must” while in Copenhagen. This 100 year old park has something for everyone, from historical buildings and lush gardens to thrill-seeking rides and roller coasters. At night, the park is adorned with over a thousand lights creating a magical atmosphere at this historical attraction.

You might be able to walk the entire city of Copenhagen in one day, but seeing and experiencing what all this bustling city has to offer—you’ll be forever entranced.

Looking for an area to shop while in the city? Walk Strøget, one of Europe’s longest pedestrian streets with a wealth of shops, from budget-friendly chains to some of the world’s most expensive brands.This area is most famous for shopping and features international brands, like Prada, Louis Vuitton, and Hermès. If you’re on a limited budget, the area near City Hall hosts H&M and Zara. 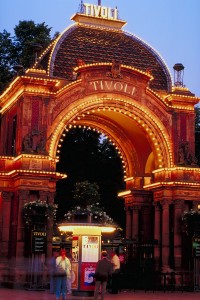 Looking for the finest in European cuisine? Then, look no further than the streets of Copenhagen where a culinary revolution is taking place. From Michelin-starred restaurants to small cafes and bars, this city has something to satisfy every palette. When dining out in the city, make sure to sample the Nordic cuisine at least once. What does Nordic cuisine look like? Usually, each meal incorporates seasoned vegetables, fresh poultry and cured or smoked meats.

Known for being innovative and using high-quality ingredients, the eateries that outline the city of Copenhagen are some of the finest in the world. This is due in major part by the introduction of the restaurant, noma, which brought in a New Nordic wave and has repeatedly won the award for Best Restaurant in the World (2010-2014).

The area of Nyhavn, once a busy commercial port where ships would dock, has been renovated into classy restaurants selling great food surrounded by a unique atmosphere. It’s a great place to grab a cold beer and rest your feet by the quayside after a long day wondering the city. Craving popular foodie places? Travel to Torvehallerne food halls, a luxury version of a food market with delis, bakeries, butchers, coffee shops, cheese chops, vegetable stands and much more.

Make sure to do your research when looking for places to eat; you won’t want to miss out on the best of what Copenhagen has to offer.

The cool, cosmopolitan capital of Denmark is blossoming with old-world charm mixed with new-world progressive qualities. Plan your trip to Copenhagen with Transam Travel, today!