Posted on March 31st, 2015 by Elizabeth Cody in Outposts

Filled with hundreds of species of beautiful wildlife, Kenya is what most people think of when they think of Africa. With its multitude of national parks and conservation areas in the shadow of Mt. Kilimanjaro, Kenya takes to heart the care and keeping of these amazing creatures. Whether you’re looking to explore the diverse landscapes, from the plains to the mountains, or take in the local wildlife on safari such as elephants, lions, and cheetahs, Kenya is full of opportunities to please all nature lovers. 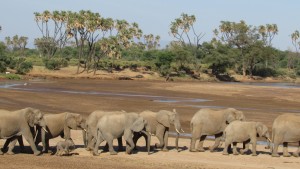 Made famous by the movie Born Free and the real life story of Elsa the lioness, Samburu National Reserve is one of the most popular reserves in Kenya. The reserve is one of the best for spotting animals because of the river that runs through it, the Ewaso Ng’iro river, that attracts both herbivores and carnivores to its banks to drink. Over 300 species of birds call the park home, as well as many species of mammals, and the river contains many Nile crocodiles. Unfortunately, rhinos are no longer present in the park because of heavy poaching. 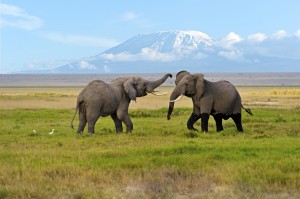 If your reflexes are quick, then you’ll enjoy taking pictures of the wildlife in Aberdare National Park. The animals are usually hiding, either in the rainforest region of the Salient or the dry Kinangop plateau, and are known for just popping out of nowhere, so keep your camera handy! An abundance of baboons and rare black leopards are some of the featured animals you will see in this national park.

Home to both black and white rhinos, Lake Nakuru National Park has many surprises up its sleeve. The lions here are known for climbing trees and sleeping in them, rather than on the grasslands. The park is also famous for its expansive flock of flamingos and hippos in residence.

Occupying the northern area of Tanzania’s Serengeti Plains, Masai Mara National Reserve is always impressive for animal lovers, with lush vegetation and steady rains keeping the food supply constant for herbivores. From July to September, however, the animals come in from other areas of Tanzania, from wildebeest to zebras, to graze on the fresh grass, creating a huge influx of wildlife. Because of this large supply of prey, predators are also thick on the ground, with Masai Mara boasting the highest concentration of lions in the world. Other carnivores that can be seen here include jackals, hyenas, cheetahs, and foxes. 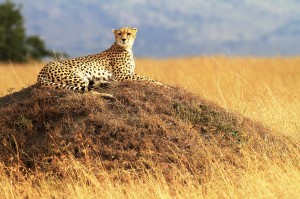 Amboseli National Park is a favorite for the elephant lovers out there, with hundreds of them stampeding against a picturesque background of Mt. Kilimanjaro rising out of the mist. The elephant population in Amboseli is some of the most studied in the world because of efforts by conservationists such as Dr. Cynthia Moss. Other animals that can be spotted here include lions, buffaloes, cheetahs, giraffes, baboons, gazelles, hippos, and wildebeest.

The most well-known of the national parks in Africa is no other than the Seregenti National Park, home to the famous annual migration where up to 1 million wildebeest and over 200,000 zebras move back into the park, along with other herds of animals, totaling over 1.5 million in all. These herds move from the highlands to the lowlands during the different rainy seasons and for mating season, which attracts many different kinds of predators. This national park shares its square footage with Tanzania, and with 14,000 square kilometers to its name, the Serengeti National Park has enough room for all this diverse wildlife, including over 500 species of birds! 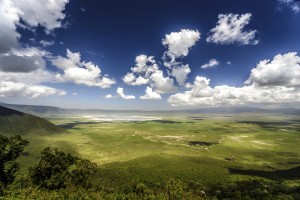 Just outside of Kenya in nearby Tanzania is the Ngorongoro Crater, a huge caldera that measures 11 miles wide with walls as tall as 2000 feet high. The walls provide a huge panoramic view of all the wildlife eating, stalking, and living their lives on the crater floor. With plenty of watering holes like the Ngoitoktok Springs and Lake Magadi, the crater sustains a large population of lions, elephants, cheetahs, hyenas, leopards, hippos, flamingos, and wild dogs.

Also in Tanzania is the Tarangire National Park, which houses the largest concentration of elephants in the world and the best bird-watching in the country, with over 450 species. With the savannah dotted with termite mounds and baobob trees, spotting the resident wildlife is easy and picturesque in this understated park. Meandering through the middle of the park is the Tarangire River which attracts wildlife and makes it a great spot to park your camera.

No matter which park you visit or what wildlife you’re hoping to encounter, Kenya can provide you an amazing look into our planet’s natural rhythms. Let SITA World Tours guide you on an amazing safari tour of these national parks, and experience for yourself the breathtaking wonders they hold.

For more information on SITA Tours and Kenya, please visit them online at sitatours.com or call them at (800) 421-5643.