Posted on April 7th, 2015 by Elizabeth Cody in Outposts

With a population of around 1.4 million, Córdoba has earned its place as the second largest city in Argentina. 200,000 of those people are in the city for school, which is why many call Córdoba by its nickname, La Docta, for the many universities and the thriving scientific community that resides here. Many of the colonial buildings built by the Jesuits in the 17th and 18th centuries are still standing and can be found in the center of the city. But Córdoba isn’t just historical buildings and education: there is also a flourishing theater culture, with many different types of performances to choose from. If you’re looking for beautiful architecture, fascinating museums, and delicious food, then Córdoba is the place for you! 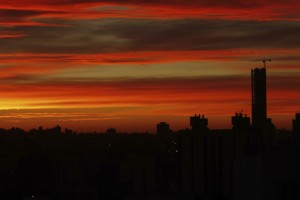 There are a multitude of museums in Córdoba covering everything from art to technology to history. One of the more beautiful art museums is Centro de Arte Contemporáneo Chateau Carreras, a small castle built in the 19th century that now exhibits modern art. If you prefer fossils to Fauvism, then you’ll enjoy Museo Paleontológico de la Universidad Nacional de Córdoba, which houses the fossil of the world’s biggest spider (those with arachnophobia will probably want to steer clear of this one). If you have children, then the Museo para Niños Barrilete is a technical museum just for them, with lots of interactive exhibits like sand boxes, giant puzzles, or blowing bubbles. For the history lovers, there is the Museo Histórico Marqués de Sobremonte, which showcases the history of the city of Córdoba and Argentina. There are also museums with varied exhibits, like the Museo de la Ciudad, Centro José Malanca, and Centro Obispo Mercadillo.

Córdoba is a city full of beautiful architectural wonders, saved from the ravages of time for over two hundred years. With the Jesuits being a dominate presence in the history of the foundation of Córdoba’s universities, they left their mark with beautiful and ornate cathedrals. Córdoba has some of the best examples of neo-gothic architecture, like the Iglesia Sagrado Corazón, and the oldest church in the entire country, the Compañía de Jesús, built in 1671. One of the most popular historical buildings is the Córdoba Cabildo,
which was once the town hall of the Córdoba. Today, the Cabildo houses the City Historical Museum, which features two beautiful colonial patios, 10 exhibition halls, a concert hall with the capacity for 80 people, the City Store, Children’s Reading Room, Municipal Publisher, and various administrative offices.

Córdoba has a thriving theater and art community, with over 50 theaters and many culture centers and “arte bars”, which host different musical acts and performers, some in the most unexpected venues. Every year the city also hosts Argentina’s most important theater festival, the Festival de Teatro del Mercosur. One of the more popular theaters is the Teatro del Libertador, styled in the ornate aesthetics of an Italian opera house, this theater features opera, classical music, and modern performers. The Paseo del Buen Pastor is a converted chapel and monastery that now functions as a performing arts space, surrounded by cafes and bars, and the chapel hosts regular live performances.

Whether you’re hungry for something cheaper or more lavish, traditional Argentinian dishes to international or fusion, Córdoba has a wide variety of restaurants to suit anyone’s budget or tastes. On the less expensive side is choripan, a stand near parque Sarmiento that serves sandwiches made from chorizo. The name chorizo originates from Argentina’s Spanish past, and is a delicious smoked pork sausage. For a more international flair, Plaza Austria serves traditional German cuisine along with local beers. If you’re craving steaks or grilled meat, try Alcorta, a steakhouse that is said to have the best steaks in the city. Besides steaks, they also serve specialty pastas and excellent fish dishes.

Córdoba might not be Argentina’s capital or its biggest city, but has a plenty of history, academia, and art to rival even Buenos Aires. Book your next Argentinian flight with Aerolíneas Argentinas!

To find out more about Aerolíneas Argentinas, visit them online at www.aerolineas.com.ar.

Share your thoughts on “Discover Córdoba With Aerolíneas Argentinas”