Explore the Cyclades Islands of Greece With European Tours | TravelResearchOnline

Explore the Cyclades Islands of Greece With European Tours

Posted on April 14th, 2015 by Elizabeth Cody in Outposts

If you’ve ever closed your eyes and pictured Greece, the glistening white buildings, azure waters, rocky protrusions, and clean sugar sand, then you have already seen the beauty of the Cyclades Islands. This archipelago in the Aegean Sea contains 2,200 islands, only 33 of which are inhabited. These islands have inspired modern art and Greek culture, and are still home to ancient Greek ruins, fascinating in their architecture. Because of its picturesque scenery, the Cyclades tend to be somewhat crowded, but the beauty and tranquility of the islands are more than worth the small inconvenience. 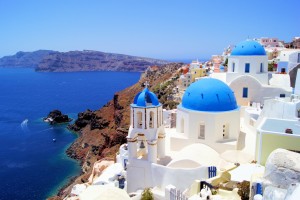 Santorini is one of the more popular of the Cyclades Islands, with historical sites, traditional villages, and an active volcano. One of the best places to explore the island’s history and archeological treasures is Archeological Museum, which features stunning Hellenistic (Greek) and Roman sculptures, as well as artifacts from Akrotiri and ancient Thira. If you’re an art lover, you’ll definitely want to take a look at the studio of Leoni Atelier, an internationally-renowned artist whose work is inspired by Santorini itself. Speaking of art, make sure you take the time to visit the village of Oia, a beautiful little village built on the slope of the caldera. The village is especially spectacular to see at sunset, when the vibrant oranges, pinks, red, and yellows play off the clean eggshell-white of the buildings and homes.

When your stomach begins to growl, Santorini has many different restaurants and cuisines to offer. One such restaurant is Karma is a contemporary Greek restaurant, offering traditional ingredients in new, inventive ways, such as fava beans with caramelised onions and capers, grilled octopus sautéed with ouzo (an anise-flavored aperitif) and fresh thyme, and soutzoukakia, a dish of ground meat kebabs basted in a red wine and tomato sauce that was traditionally used as an aphrodisiac.  Fava beans especially are a Cyclades specialty.

The second largest of the Cyclades Islands, Paros is much less crowded but no less beautiful than its sister island, Santorini. The island became prosperous due to its white marble mined from the mountain, this same local material used to carve both the Venus de Milo and Napoleon’s tomb. The island boasts many beaches and picturesque villages, earning its title as one of the most beautiful of the Cyclades Islands. One of the most impressive buildings on the island is the Panagia Ekatondapyliani (“Our Lady of a Hundred Gates”) a church and museum built in 326 AD that is actually an amalgamation of 3 different churches: Agios Nikolaos, the Church of Our Lady, and the Baptistery. After you peruse the museum, discover the art of traditional wine-making at Moraitis Winery. The Moraitis family has been making wine for over 100 years, and offers tours of the original stone cellars and equipment, as well as wine tastings. 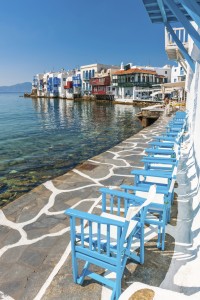 Paros’s closest neighbor, Naxos, is the largest island of the Cyclades, and the most fertile, sporting crops of olives, grapes, figs, citrus, corn, and potatoes. The island is also home to the highest peak of the Cyclades, Mt. Zeus, where the god Zeus was raised away from his father Kronos who wished to kill him. For those who love the outdoors, the island is a popular place for windsurfing, kiteboarding, and leisurely treks along the beaches. Because of its bountiful crops, Naxos has a wide variety of cuisines available, including moussaka, souvlaki, and feta available in its numerous restaurants on the island. The olive oil here is also of a superior quality to what can be found imported in other countries, retaining more of the pure olive flavor and complexity.

Mykonos is the other more famous island (besides Santorini) in the Cyclades archipelago. A popular cruise ship stop and celebrity hangout, Mykonos can get very crowded in the peak season, but during the winter you can find tranquility and peace in walking the quiet streets. Mykonos is one of the most popular gay tourism destinations in Europe, and therefore is very open and friendly to gay visitors.

One of the most popular attractions in Mykonos are the windmills, a reminder of Mykonos’s past as a wheat and bread supplier; now it is a picturesque place to watch the sunset and survey Little Venice. Little Venice is a very popular romantic area on the island, located near the sea and bustling with cocktail bars, the perfect place to have a drink and watch the sunset paint the water with fire. Mykonos has over 21 beaches on 4 coasts, each with varying crowds and amenities. Some beaches are clothing optional, be sure to check when you arrive on the island which beaches permit nudity and which forbid it.

If you’d rather explore ruins or go scuba diving than lay out on the sand, then Amorgos is the island you’re looking for! Amorgos has fantastic walking trails, beautiful clear water to dive in, and a blossoming rock-climbing culture. High above the sea you’ll find Moni Hozoviotissis, a breathtaking monastery that is still home to a few monks, so modest dress is required to enter. The monks will hold informal tours when enough visitors are gathered, and while it is free donations are appreciated.

Ready for your adventure to the Cyclades Islands? Can’t wait to explore ancient Greek ruins and watch the sunset sink below the horizon? Then visit European Tours at www.europtours.com or give them a call at (800) 882-3983.