Experience The Unique European Flair Of Brussels With Jetairfly | TravelResearchOnline

Experience The Unique European Flair Of Brussels With Jetairfly

Posted on May 19th, 2015 by Elizabeth Cody in Outposts

The largest metropolitan area in Belgium, Brussels has come a long way from its medieval founding. Originally a 10th century fortress town, Brussels today is the epicenter of European politics as the de facto capital of the European Union. The culture of Brussels is an odd juxtaposition all on its own: politicians walking with immigrants, modern buildings next to 19th century mansions, French spoken alongside Flemish. This bizarre blend of new and old has created a unique culture that can only be found in Brussels. 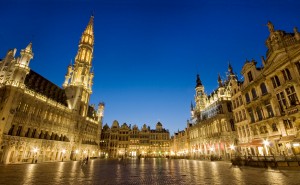 One of the best places to see examples of Brussels’s global fascination is at the Museés Royaux d’Art et d’Histoire. The museum was founded in 1835 in one of the last remaining gates of the medieval city of Brussels. The collections include sarcophagi from Egypt, masks from the prehistoric days of the American continent, medieval stone carvings, and Roman mosaics. Exhibit descriptions are in French and Dutch, so if you’re not fluent, you might want to consider paying for the English audio guide.

One of the most popular tourist areas, the Grand Place is the central square in Brussels surrounded by grand architecture, the Town Hall, and museums. Originating as an open-air marketplace on a dried-up marsh in the 10th century, the Grand Place has evolved into one of the must-see places in Brussels for visitors. Ornate buildings well over 300 years old line the square and are absolutely stunning after dark, especially when the buildings are used as a canvas for an evening light show. Every other year in August, the floor of the square is covered in over a million colorful begonias to create a “flower carpet” with intricate patterns. The first carpet was made in 1971, and became so popular they decided to make it a tradition, drawing in the tourists every year the carpet is created. 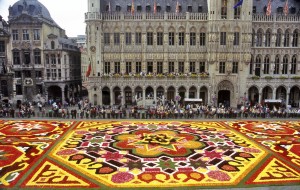 One of the most unusual monuments in Brussels is the Atomium, a massive model of an atom in its crystalline structure built in the 1950’s as a symbol of postwar progress. Brussels was host to the 1958 World’s Fair and the structure was supposed to be torn down shortly thereafter. However, the monument proved to be such a popular architectural icon that it stayed, and was renovated in 2006. The nine balls that make up the atom are especially stunning at night, when they glisten against the night sky. There is a restaurant in the structure, and a reservation will waive your entrance fees to explore the giant atom.

If you’re a beer lover, then you cannot miss a tour of the Cantillon Brewery, a museum and working brewery all in one. The last brewery in Brussels that still uses the lambic technique of spontaneous fermentation, the brewery still uses much of the original 19th century equipment to create its signature brews. The beer is aged for three years in chestnut wine casks and tends towards the acidic in flavor. The museum is self-guided and features a mashing tun, boilers, a filter and bottling machine, and more antiquated equipment. Your tour fee includes two tastings of the multitude of in-house brews which are made with only organic cereals and certified by Ecocert as “100% Organic”.

For more information on Jetairfly, visit them online at www.jetairfly.com, email them at jetairfly@apg-usa.us, or call them at 877-512-3759.