Posted on June 9th, 2015 by Elizabeth Cody in Outposts

In the southern region of Spain, incorporating the Sierra Nevada mountain range, deserts, and ancient cities is the region of Andalucía. Bordered on the west by Portugal, Andalucía encompasses all that marks Spain as a cultural center: flavorful Spanish cuisine, passionate flamenco dancing, gorgeous historical architecture, and warm sun-drenched beaches. Andalucía is divided into provinces, from trendy Granada to jumping Seville. European Tours is your guide to this amazingly warm and tantalizing region set in the south of Spain! 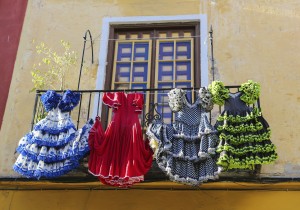 Almería, which translates to “watchtower” in Arabic, was founded to create a better system of defense for the surrounding Arab towns in the region. Today Almería is a city with 60’s aesthetics, filled with amazing museums, architecture, and beaches. One of the newest museums is the Museo de la Guitarra, a new interactive museum dedicated to the life and works of Antonio de Torres, who helped develop the design for modern acoustic guitars. Built on the former site of a mosque before it was destroyed by an earthquake, the Almería Cathedral is a Gothic architectural marvel, with the inside carved from jasper, marble, and walnut wood. But if you’re looking to relax and soak up the Spanish sun, Almería has plenty of beaches for you to lay out in, such as the beaches of the Natural Park of Cabo de Gata-Nijar and the beaches in the Bay of Almería.

Founded around 3,000 years ago by Phoenician sailors, Cádiz is said to be the oldest city in Western Europe, and remnants of the Phoenician era can still be seen around the city (including two Phoenician sarcophagi in the Archeological Museum). The city has a romantic ambiance to it; surrounded by the Atlantic Ocean, waves are crashing against the crumbling sea walls built to protect the city from Sir Francis Drake’s attempts to overtake the city. The forts of San Sebastian and Santa Catalina are open to the public, where you can explore and take in beautiful views of the expansive Atlantic Ocean. The Cadiz Catedral is also a must-see, with it’s Baroque architectural style and spectacular views when you climb up to the top of the North Tower. Cádiz is also home to the biggest Carnaval celebration in the world in February: with dancing, music, and drinking, Carnaval is the last hurrah before the Lent season, and many of the revelers end up sleeping on the beaches in sleeping bags. 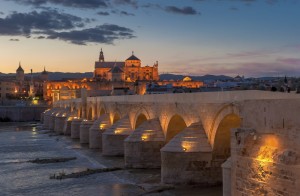 If you love to explore on foot, then Córdoba is your ideal treasure trove of Spanish culture, cuisine, and beautiful courtyards. The entire city has been declared a World Heritage Site for its roots in Roman, Spanish, and Arabic cultures. One of the most stunning and majestic sites in the city is the Mezquita Cathedral, with beautiful cream and rust colored striped stone arches. The cathedral still holds morning mass which will also get you free entry into the cathedral, otherwise you will pay €8 for entry. In the Old City, the Roman Bridge is a magnificent sight, with its Roman arch over the entrance, it created a route over the shallow Guadalquivir River. 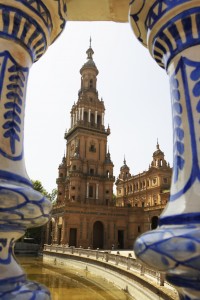 Considered by many as the most youthful and innovative province in Spain, Granada is the perfect balance of nightlife, natural sights, and the breathtaking architecture Spain is famous for. If you’re looking for amazing cuisine and nightlife, then you’ll want to make a visit to the Plaza Nueva, the oldest square in Granada that is also home to the city’s best restaurants and tapas bars, making it central to anyone looking for a good time. One of the most popular natural sights in Granada, however, is the Alhambra, a medieval fortress, garden, palace, and government city that is a grand statement of Arabic architecture and art. The walls are sculpted in the Nasrid style, including horseshoe arches and walls covered in incredibly ornate and detailed ceramic and plasterwork. The best time to visit the Alhambra is outside of the summer months, when the crowds are thinner and you’ll have more time to absorb the amazing architecture and ceramics.

According to legend, Seville was founded 3000 years ago by the Greek god Heracles, who sailed through the Strait of Gibraltar and also founded a trading post in Cádiz. Today the city has fewer Greek gods but more museums, monuments, and Spanish pavilions. One of the pavilions available for the public to view is the Plaza de Espana, the Spanish pavilion built for the 1929 World’s Fair. Built in the Art Deco and Neo-Mudéjar styles, the pavilion was meant to showcase Spain’s industrial and technological advances in their exhibits. The Plaza has also been a popular site for many Hollywood films, including Lawrence of Arabia, Star Wars: Episodes I and II, and The Dictator.

Are you ready to discover all Andalucía has to offer?

To learn more about the Spanish region of Andalucía, visit European Tours online at www.europtours.com.

Share your thoughts on “Discover Intoxicating Andalucía With European Tours”