Discover The Great Cities Of Kazakhstan With Air Astana | TravelResearchOnline

Discover The Great Cities Of Kazakhstan With Air Astana

Posted on June 23rd, 2015 by Elizabeth Cody in Outposts

The ninth largest country in the world, Kazakhstan is larger than the entirety of Western Europe, and the largest landlocked country in the world. Bordering four other Asian countries, Kazakhstan is one of the most affluent of the Central Asian countries due to its rich resources of oil and valuable minerals. This affluence is discernible in the European architecture and ambiance of its two largest cities, Astana and Almaty, both of which will be in the spotlight of the international community in the upcoming years. Astana will be the host city for the International Specialized Exposition of 2017, and Almaty is one of the final two chosen cities to host the 2022 Winter Olympic Games. The people of Kazakhstan are considered the warmest and kindest in Central Asia, and you will experience unrivaled hospitality by the Kazakh people as you explore its greatest cities. 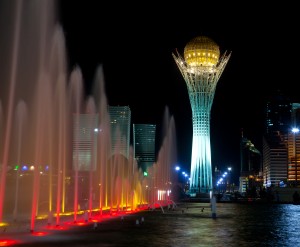 The capital of Kazakhstan, Astana, took over the role from the largest city in the country, Almaty, only 18 years ago in 1997 due to its better stability in earthquakes. The city is still being groomed and developed with new, modern architecture, but improvements have already been made to the cityscape. The buildings are a mixture of contemporary, sleek lines and simple highrises that marked the Soviet era of the country.

One of the most stunning pieces of modern architecture in the city, the Bayterek Monument was created based off of a folk tale. The story is that the magical bird of happiness, Samruk, laid its egg in the Tree of Life, a poplar tree. The egg holds the secrets of happiness and desires far above where people can reach. The monument is designed like the poplar tree, with white girders shaped like branches spread to cradle the golden “egg”. Inside an elevator takes you to the observation deck 97 meters off the ground in honor of the year the city was formally named the capital, 1997.

Another gorgeous architectural marvel is the Khan Shatyr, a 150 meter high building in the shape of a tent and made out of a heat-absorbing material that keeps the inside feeling like summer, even when the outside temperatures reach lows of -30° C. The inside is much like a shopping mall, with a food court, monorail, drop tower, flume ride, minigolf, and on the top level an indoor beach, complete with sand and water. The roof is made of fabric suspended by a mast and was erected in a ceremony in 2010 on the 70th birthday of the country’s president, Nursultan Nazarbayev, with visiting dignitaries and celebrity performances to mark the occasion.

A glass pyramid soaring over the Astana skyline, the Palace of Peace and Accord is a unique architectural feature in a city of stunning modern architecture. The Palace was built as the home for the Congress of World and Traditional Religions, which meets every three years. The Palace has an atrium for the Congress that oversees the entire city through hundreds of windows; a 1350 seat opera hall with plush red seats and a giant chandelier; and a conference room featuring beautiful stained-glass windows with images of doves, created by British artist Brian Clarke. At night, the Palace is illuminated in different colors, creating a pyramid of color against the dark sky.

Astana has the distinct privilege of being the host for the 2017 International Specialized Exposition which is focusing on the innovations of “Future Energy”. Astana itself suggested the exhibition topic, with the focusing of creating short and long term sustainable energy practices across the world. This is the first time that a former Soviet Union country has hosted an event like this, and a projected 2-3 million visitors are expected to pass through the pavilions between July and September of 2017. 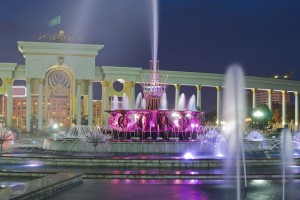 Fountain in the Respublika Alany

The former capital of Kazakhstan, Almaty is still the cultural and financial center of Central Asia. The city is built on a slope, going uphill from north to south; if you’re walking downhill you’re heading north, and vice versa. The city is bordered by snow-capped mountains on the southern and eastern side of the city, and the weather is hot in the summer and cold in the winter.

The Central State Museum is one of the must-see sights in Almaty. The museum has exhibits that chronicles Kazakhstan’s history from prehistoric times to the present. The exhibits include Archaeology, Ethnography, Independence of Kazakhstan, and the History of Kazakhstan, all which can be accessed with regular admission. There are also other exhibits which require separate admission purchase, such as gold artifacts and anthropology exhibits named after famous academic Orazak Ismagulov.

The main square in Almaty, the Respublika Alany, is the former administrative center before the government moved to the new capital, Astana, in 1997. After the move, the square was renovated to include TV stations, gardens, and the Monument of Independence. There is still a Presidential Residence in the square as well, despite the fact that Almaty has not been the capital of the country for 18 years.

Almaty is one of two cities in the running for hosting the 2022 Winter Olympic Games, with the other city being Beijing in China. The city has co-hosted the 2011 Asian Winter Games with Astana, and will be hosting the 2017 Winter Universiade. Previously, Almaty had bid for the 2014 games but was not chosen as a candidate city. The International Olympic Committee will make their final selection of host city on July 31, 2015 in Kuala Lampur, Malaysia.

To learn more about Air Astana, visit them online at www.apg-usa.us/air-astana.