Posted on June 18th, 2015 by Elizabeth Cody in Departures

Las Vegas needs no introduction: “Sin City”, “The Entertainment Capital Of The World”, and “The City Of Lights”, all spot-on descriptions of this dusty desert city. While most think they know the real Las Vegas, all glitz and glamor with sequins falling from the sky, there is so much more beyond the Strip and all its casinos. You can scale rust-colored sandstone canyons, enchanted by dazzling acrobatics, and visit some of the best entertainment of the past and present. 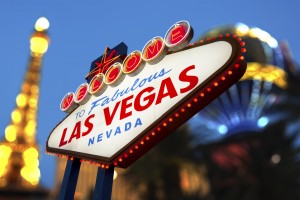 Las Vegas is a fairly new city when you compare it to other American cities like New York and Boston; founded in 1902, its name translates to “The Meadows” in Spanish. The city was just a dusty settlement until the construction of the Hoover Dam in 1928, bringing in a flood of workers and establishing Boulder City 26 miles southeast of Las Vegas. In 1931, Nevada legalized gambling, an opportunity Las Vegas pounced on and became the entertainment center for the dam workers, building casinos and speakeasies. In less than 10 years, it overtook Reno as the gambling capital of the world and began attracting visitors from California, where gambling was still illegal at the time. In 1941 the first luxury hotel was opened on what is now known as The Strip, creating a legacy of luxury one-upmanship between casinos and hotels that continues to this day.

Today’s Las Vegas is worlds away from the small desert down of the 20th century; it’s a world of both excessive and simple pleasures, all at your fingertips. Whether you’re looking to strike it big at the casinos, relax in a luxurious spa, see a Broadway-caliber show outside of New York City, be entranced by magic, or just explore the breathtaking sights of the desert that surrounds this urban oasis, you can find it here in Las Vegas. Including some aspects of Las Vegas you never expected existed! 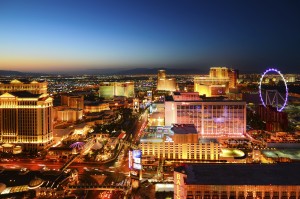 When most people think of cuisine in Las Vegas, they think of dollar buffets or appetizers in the casino bar. What they don’t know is that Las Vegas is not only home to restaurants run by some of the most iconic chefs in the world, but also multiple culinary schools, including Le Cordon Bleu.

While there are still plenty of buffets for the thrifty traveler, for the more discerning palate there are plenty of haute cuisine restaurants as well as fun off-the-beaten-path diners. One such celebrity chef is Todd English and his restaurant Olives, a Mediterranean restaurant set against Lake Bellagio, with pasta, rotisserie, steak, and pizza dishes by a world-renowned chef. At Caesar’s Palace is Mesa, Southwestern chef Bobby Flay’s festive restaurant is serving up local Southwest favorites. If you love fresh and creative sushi, then Nobu is just for you: blending traditional sushi with the spicy flavors of Latin cuisine, this restaurant is sure to be a favorite!

For a more casual dining experience, look no further than the local restaurants inspired by legendary artists. Toby Keith’s I Love This Bar And Grill is a casual down-home eatery featuring steaks, burgers, and live country music in the evenings. Over at Jimmy Buffett’s Margaritaville, dishes inspired by Jimmy’s songs are served with a tropical flair, including a Burgers in Paradise menu. If you’re looking for what is considered the best steakhouse in the entire country, then you’ll want to head over to Craftsteak: be warned though, the prices are not for the faint of heart, but the steaks are genuinely one of a kind! 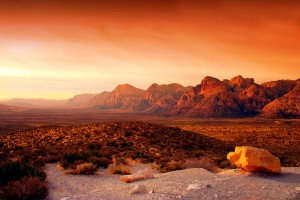 Once you’ve filled your stomach, it’s time to take a look at the more active side of Las Vegas. Rock climbing, skiing, hiking, horseback riding, camping, walking trails and biking are all right there in the same area as the city that practically sings with the clinking of casino chips. The best place to explore the desert and see what Nevada has to offer outside of its bigger cities is Red Rock Canyon, a gorgeous red-rocked national conservation area. The area was settled first by Native Americans who were drawn to its resources of water and plant life that were lacking in the surrounding desert. Part of the land was conserved in the 1960s, and by 1990 the Red Rock Recreation Lands had been established. Visitors should be aware that, just like in Las Vegas, temperatures can exceed 105° F and should stay hydrated and exercise due caution.

One aspect of Las Vegas not known to many visitors is that it is home to some of the most innovative roller coasters and rides in the country. The first one, the Roller Coaster at the New York New York Hotel, sends you 203 feet up, drops you 144 feet, and then spins you in a 180° barrel roll just like a jet pilot. One of the most exhilarating and terrifying rides is on top of the tallest hotel on the Strip, the Stratosphere, the X-Scream suspends you 866 feet above the Strip, 27 feet off the side of the hotel. Another ride at the Stratosphere is Insanity, The Ride- appropriately named as it dangles you 64 feet off the side of the hotel and spins you at 3 Gs. If you would rather not get your heart racing on any of these rides, there are safe shops and viewing areas on top of the Stratosphere hotel for you to enjoy.

Share your thoughts on “Viva Las Vegas! With ezBOOKbyABC.com”