Join Me On A Silversea Voyage To Greenland On Silver Explorer

Wanna meet up? Why not Greenland? I’m headed there August 27, 2015 for a seven-day expedition on Silver Explorer. This is the perfect trip to couple with a longer Baltic itinerary roundtrip to Copenhagen. That’s because flying from the Danish capital is the easiest way to get to and from Greenland. 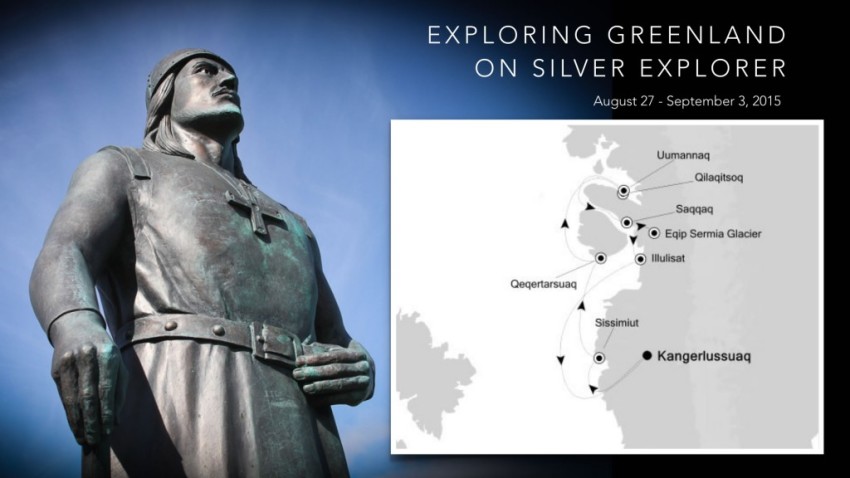 Of course, you’ll need to check with your favorite cruise seller to see if there is still space remaining on Silversea Expeditions Voyage 7519. Then do a little research for Baltic cruises to marry with the expedition. No need to worry about packing winter gear for Greenland: Silversea gives you a complimentary Silversea-branded parka that will keep you warm out among the icebergs, and there will be plenty of those.

If you can’t make it, then at least follow along on AvidCruiser.com as I file daily reports from our voyage.

The Silversea expedition will mark my third trip to Greenland, and I hope it’s not my last. Anything but green (80 percent of Greenland is covered in ice), the world’s largest island is part of the North American continent, but it is connected to Europe. An autonomous country within the Kingdom of Denmark, Greenland is a fascinating place, and there’s no better way to experience than on a Silversea expedition.

Here’s what Silversea is promising on this voyage:

There will also be plenty of time spent in Zodiacs, beginning in Kangerlussuaq with the transfer from the pier to Silver Explorer, waiting at anchor for us. In fact, the expedition begins and ends in Kangerlussuaq, Greenland’s connection with the outside world. The Kangerlussuaq airport dates from American settlement in the area during and after World War II, when the site was known as Bluie West-8 and Sondrestrom Air Base.

After embarkation, we’ll head just north of the Arctic Circle to Sisimiut, the second-largest – as well as the northernmost – town in Greenland where the port remains free of ice in the winter. Sisimiut also has the peculiar distinction of being the southernmost town where there is enough snow and ice to drive a dogsled in winter and spring. In Sisimiut, traveling by sled has been the primary means of winter transportation for centuries. The Greenlandic sled dog has been bred to rank among the world’s strongest working dogs and you’ll see plenty of them as we travel through the town (not to worry, they’re all tethered).

Another typical and iconic “vehicle” of transportation is the qajaq (known to us as the “kayak”) and although most Greenlandic hunters or fishermen use modern boats, many still have a qajaq.

Sisimiut has been home to humans for almost 4,500 years. Ruins of early settlements can still be seen west of the town.

We’ll visit the Sisimiut Museum, which houses part of its collection in Greenland’s oldest surviving church as well as in a peat house. For those interested in tasting some of the local delicacies, the museum will offer us Greenlandic soup, shrimp, and dried fish that we can taste while visiting the museum.

After Sisimiut, it’s on to Qeqertarsuaq Island, the “Big Island,” where we’ll visit the village with the same name at the southern tip of the island. From the village of Qeqertarsuaq, we’ll set out on a guided walk through this small fishing and hunting town of 1,000 inhabitants.

Day four takes us to Qilakitsoq and Uummannaq (easier to read than pronounce!) In Qilakitsoq, we set off to unearth history’s mysteries as we visit the gravesite of 500-year-old mummies, the best-preserved human remains in all of North America. Commonly referred to as the “Greenland Mummies,” eight mummies (six women and two children) were discovered in 1972 and are believed to date back to 1475 A.D. The mummies are now in the National Museum in Nuuk.

Near the landing site are remains of early settlements. The houses and graves belonging to the Thule culture seem to have been abandoned more than 200 years ago.

In the iceberg-laden waters surrounding the remote community of Uummannaq, we will see whales if we’re lucky. This area of Greenland is known for its huge basalt mountains. The small hunting and fishing village rests at the foot of the heart-shaped Uummannaq Mountain, a name that translates to “in the shape of a seal’s heart.” We’ll take a guided walking tour of Uummannaq to see the granite church and learn how village life revolves around the halibut and fish-processing factory. The more energetic of us will have the opportunity to hike to the “summer residence of Santa Claus.”

As we continue our exploration of the Disko Bay area, we’ll stop of at one of the smallest settlements that we’ll come across during our voyage. There, we’ll visit locals, learning more about their culture and lifestyle. Before departing we’ll enjoy a Zodiac tour of the rugged coastline and the many icebergs that get stranded here after breaking off from the Jakobshavn Glacier.

During the afternoon we’ll cruise past Arve Prinsens Island to reach one of the glaciers north of Ilulissat. This is where Paul-Emile Victor started in 1948 to reach the icecap. The glacial front still has a length of almost 3 miles and calves several times a day. We hope to be there and witness a calving from a safe distance – be it on board Silver Explorer or in a Zodiac.

On day six we visit Ilulissat. The town is known for its long periods of calm and settled weather, but the climate is a bit colder due to its proximity to the fjord. While here, we may have the opportunity to see a demonstration of ancient fishing methods and enjoy some locally caught and prepared fish. During our guided walking tour of Ilulissat, we will visit the local history museum, which used to be the home of famous Arctic explorer Knud Rasmussen.

Just after sunrise, I plan to be out on deck to see the northern hemisphere’s most active glacier – the Jakobshavn Glacier. Known as the birthplace of icebergs, the Ilulissat Icefjord produces several million tons of ice each day. Its entrance is often surrounded by icebergs in all shapes and sizes and in varying shades of white and turquoise. The afternoon tour continues via fishing boat, as we navigate among the many icebergs at the fjord’s entrance.

Our last day is a sea day before disembarking the next morning in Kangerlussuaq and our return flights to Copenhagen.

I’ve been on three Silversea expeditions during the past several years and all have exceeded my expectations. Each one has presented myself and others with life-enriching experiences, among the best cruises that I’ve ever done. So, if you can get it together in time, and if there is space, come along and let’s explore together. If you can’t make it when I’m traveling, find another expedition to join. You won’t regret it I assure you.