Tauck’s ms Savor: Danube Reflections, The Wachau Valley, And A Guest Pedals Along With Me | TravelResearchOnline

Tauck’s ms Savor: Danube Reflections, The Wachau Valley, And A Guest Pedals Along With Me

“There are two kinds of people. One kind, you can just tell by looking at them at what point they congealed into their final selves. It might be a very nice self, but you know you can expect no more surprises from it. Whereas, the other kind keep moving, changing… They are fluid. They keep moving forward and making new trysts with life, and the motion of it keeps them young. In my opinion, they are the only people who are still alive. You must be constantly on your guard against congealing.” – Gail Godwin 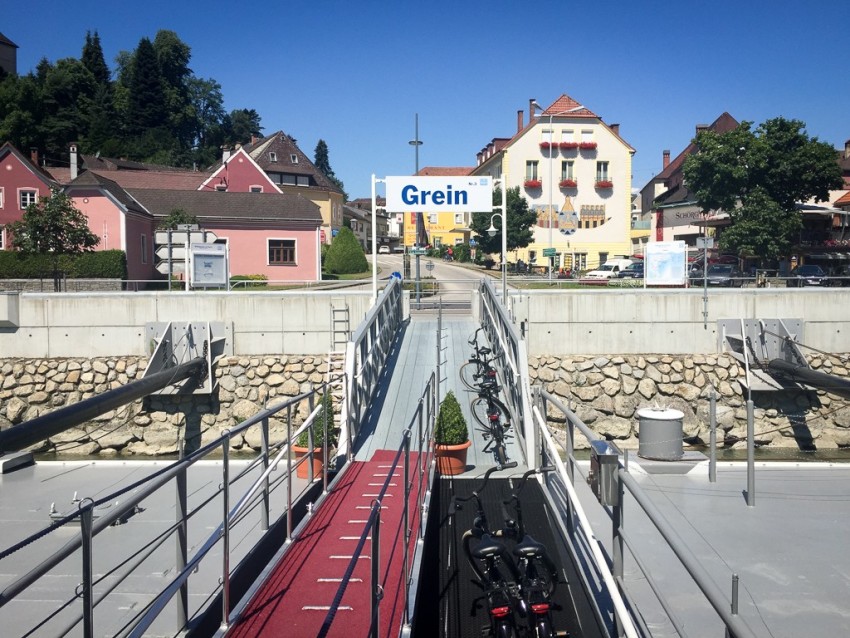 I have spent a life in motion, starting as an itinerant cyclist in my twenties (pedaling across the U.S., up the rugged West Coast, back to North Carolina through Canada, through New Zealand, Australia, then Europe — I cycled all of those places and more). During much of that time (and since then), I have worked as a peripatetic journalist, sent on assignments around the globe. After graduating from the University of North Carolina’s School of Journalism at Chapel Hill, I worked in an editorial capacity at both travel trade and consumer travel magazines. I wrote for a dozen years for United Airlines’ award-winning in-flight magazine. I loved writing and being on the go, with my family or without them, though I preferred (and still do) traveling with friends and loved ones. What good is an experience, after all, if it is not a shared one?

My life in motion has rewarded me with many beautiful experiences. Absorbing the vibrance of the flower market on a sunny morning in Nice, enjoying coffee and cake in Vienna as Strauss plays lightly in the background, walking among Sweden’s yellow canola fields pitched against a blue sky dotted with cotton ball clouds, watching the dance of the aurora borealis in the Norwegian Arctic, observing the Charlie Chaplinesque antics of penguins in Antarctica, traveling Russia’s Kamchatka region with my son and finding the elusive reindeer herders that no one else could find, cruising with my daughter across Sweden on the world’s oldest passenger ship and hearing her say after I had taken her to a concert where her favorite pop singers were performing in Stockholm: “best night of my life dad.” I’ve dined in palaces and at roadside pizza kiosks. I’ve sipped champagne in St. Petersburg, Becherovka in the Czech Republic, Gammel Dansk in Denmark, and Provencal rosé only a few weeks ago with my loved one in France’s Camargue region. I could go on.

I was not born with a silver spoon. My family was poor. My father was a logger. At ten years old, I went to work in the forests, driving a tractor to skid out logs. By age 20, I had worked for a decade in the woods. Aware that logging would take my life (literally and figuratively), I decided that I would pedal out of town on a bike. I trained, and on a warm Carolina day in March, I waved goodbye to my dad as I pedaled along our gravel drive, my bike loaded with all that I needed to be self-sufficient: panniers stuffed with clothing, stove, tent, and sleeping bag. 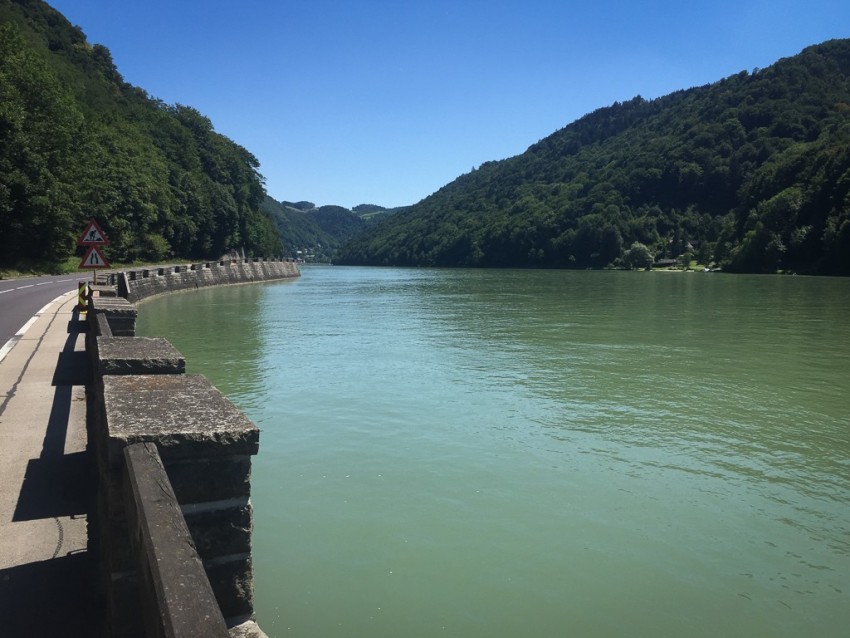 The Blue Danube on our ride today. © 2015 Ralph Grizzle 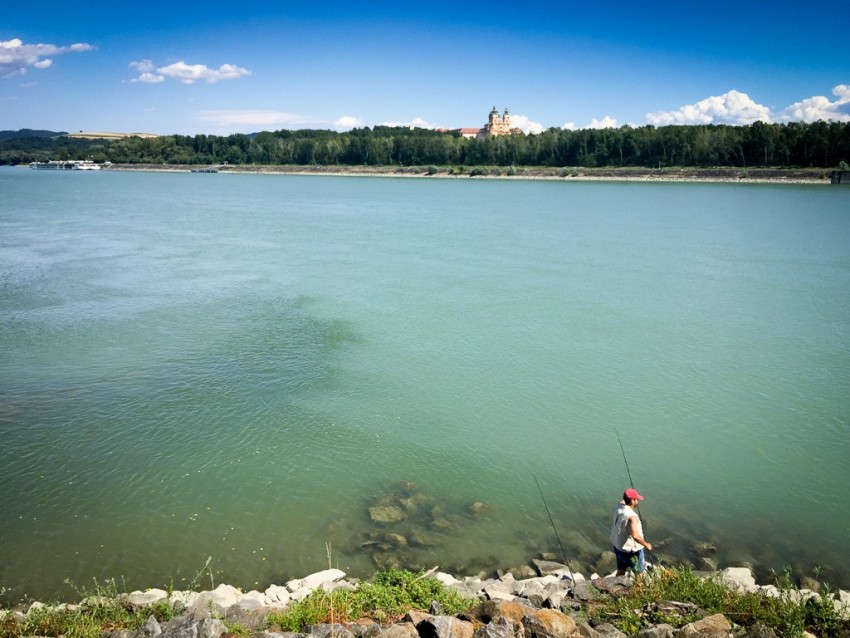 I sometimes tire of travel, but never of motion: I never grow weary of spinning. At home, which is in Helsingborg, Sweden and in Asheville, North Carolina, I continue to spin. There is something about the motion of pedaling a bike that is soothing. The endorphins, the euphoria. Cycling becomes therapy in motion. Aside from that, it is downright fun to experience the world on two wheels.

Today on Tauck’s ms Savor, I was preparing for yet another bike ride. In the lounge, where I had a warm pretzel and a couple of bananas (fueling up), I spoke with three people who remarked on my bike ride two days ago from Passau to Linz. Philadelphian Pete was traveling with his wife and mother-in-law. “I’m going again today,” I said. “You should join me.” Pete shrugged it off with a laugh, as if to say it wasn’t for him. I went back to my room to prepare for the ride, packing my GoPro, my phone, three bottles of water, and a first-aid kit. Was I ready? Then came the text on my iPhone.

“Ralph – Pete – on the ship with you – would like to ride with you. When are you leaving?” 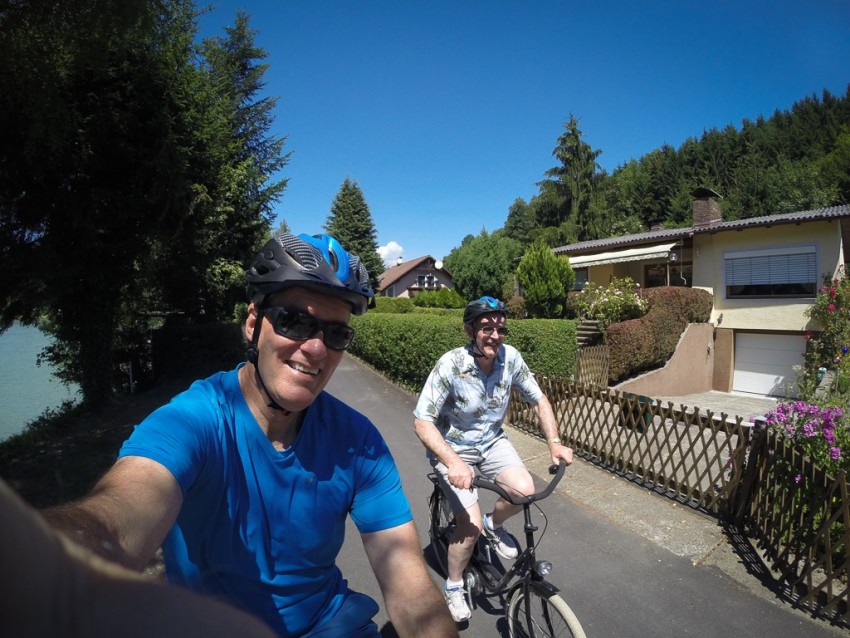 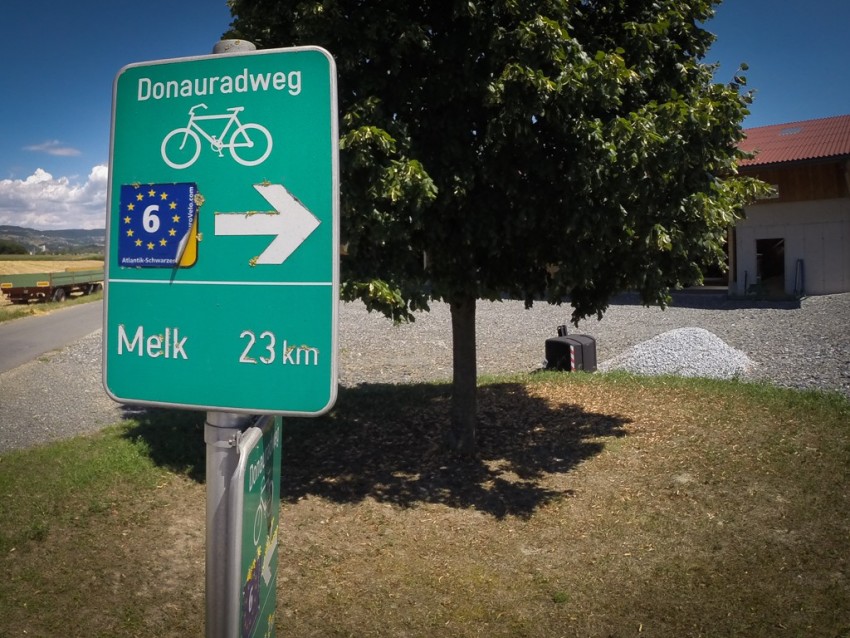 I wasn’t sure if Pete was up for this. Suppose we had heat and hills like I had yesterday? Suppose we had fierce headwinds? We would need to cover 70 kilometers to reach the ship at 5:30 p.m. in Weissenkirchen. There were a dozen things that could go wrong, but there was one thing that could go right: I’d show Pete the beauty of what I had experienced on two wheels.

Pete’s wife Lori gave him a hug and a kiss. His mother-in-law made me promise to bring him back safely. Sinead, our Tauck tour director, said, “We’ll be on the lookout for the Hawaiian shirt.” Yes, Pete was probably the only one in all of Austria wearing such a shirt.

We pedaled out of the small village of Grein, sharing the highway for 30 minutes or so with traffic until we hit dedicated bike lanes. The opposite side of the river may have been a better choice for the start of our ride. Fortunately, however, we had a light tailwind and while the day was a scorcher, we were creating a light breeze by propelling ourselves along the bike paths. 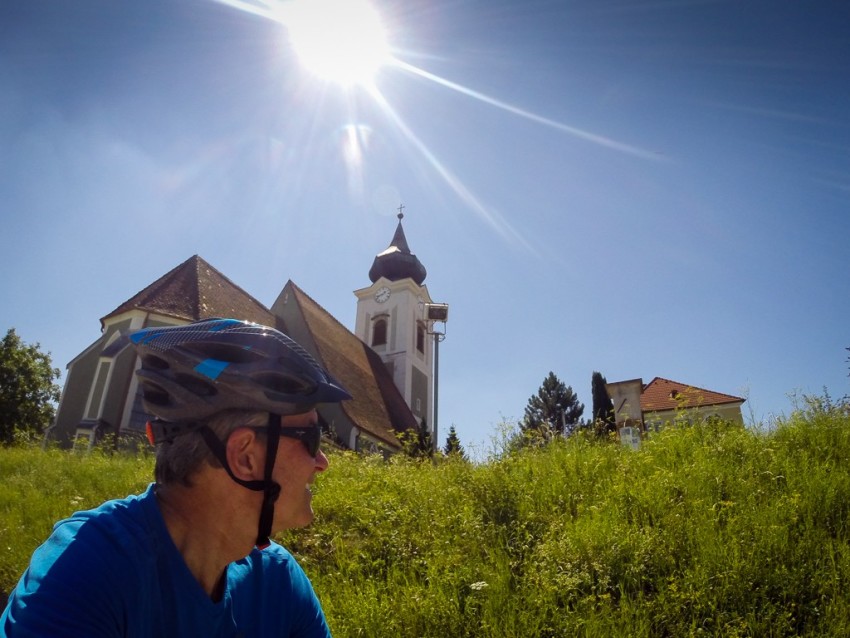 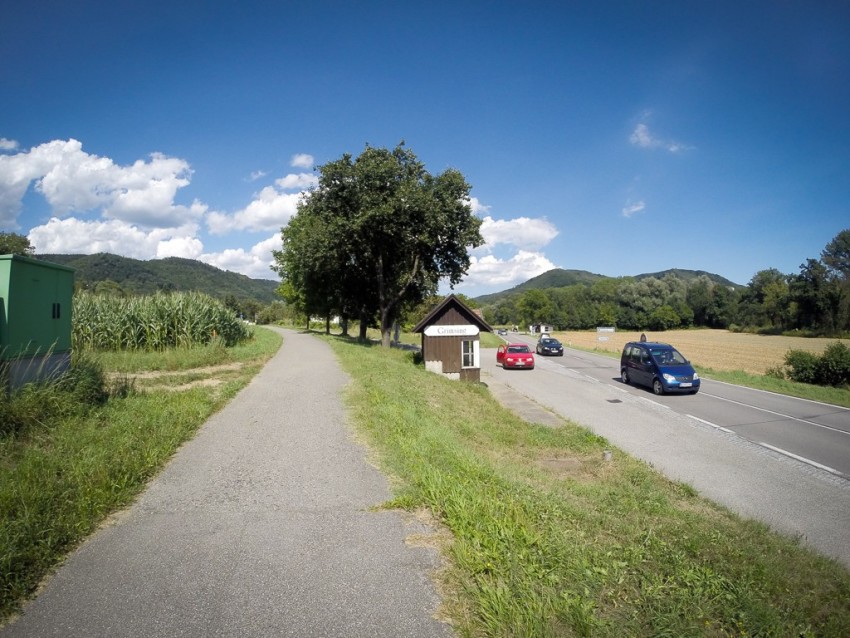 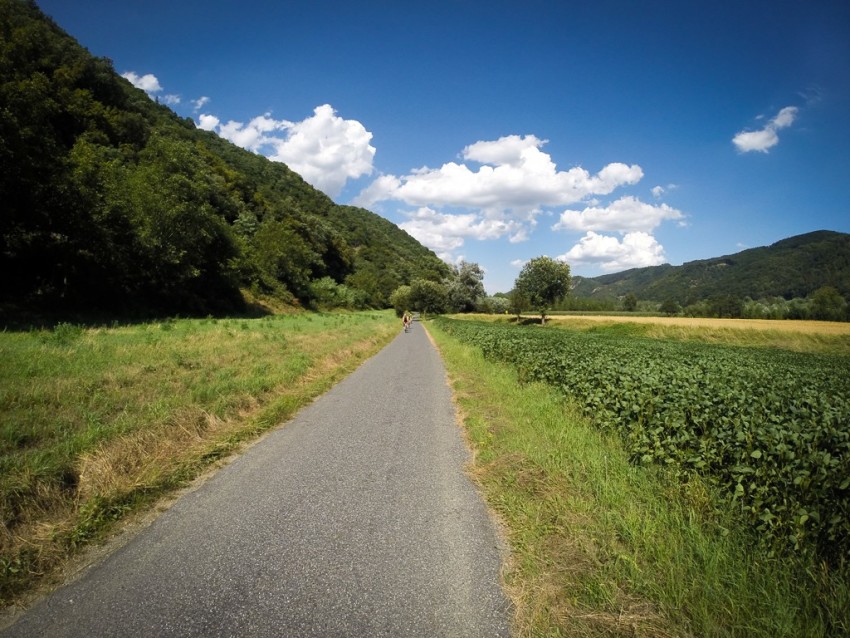 Our day is largely reflected in the photos. The pedaling was easy, the scenery stunning. We had time to slow down and talk, riding side by side on the wide bike lanes. After two hours, we pedaled to the top of a lock for an incredible view of the Melk Abbey. An hour later, we stopped for apricots, which were being harvested from groves in the Wachau Valley. 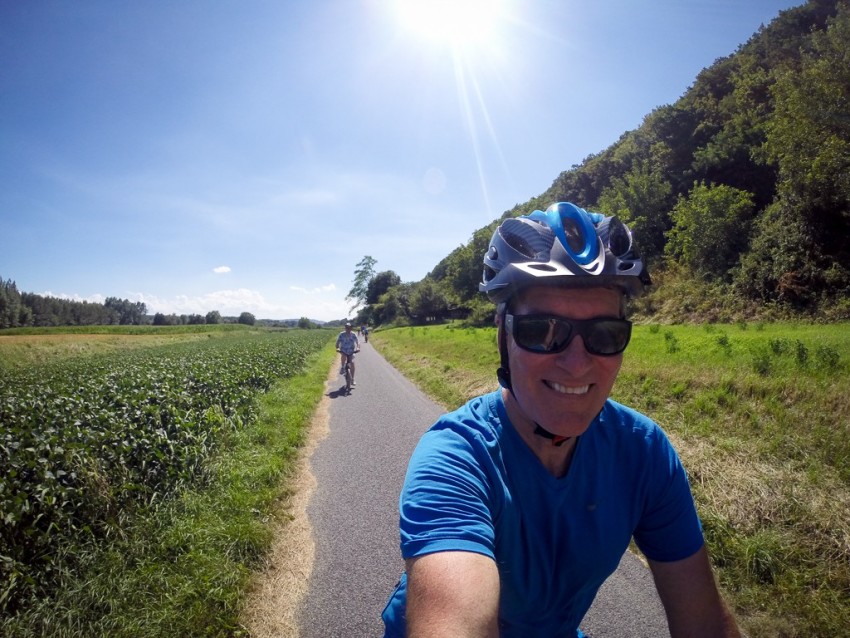 Making our way through the Wachau Valley. © 2015 Ralph Grizzle 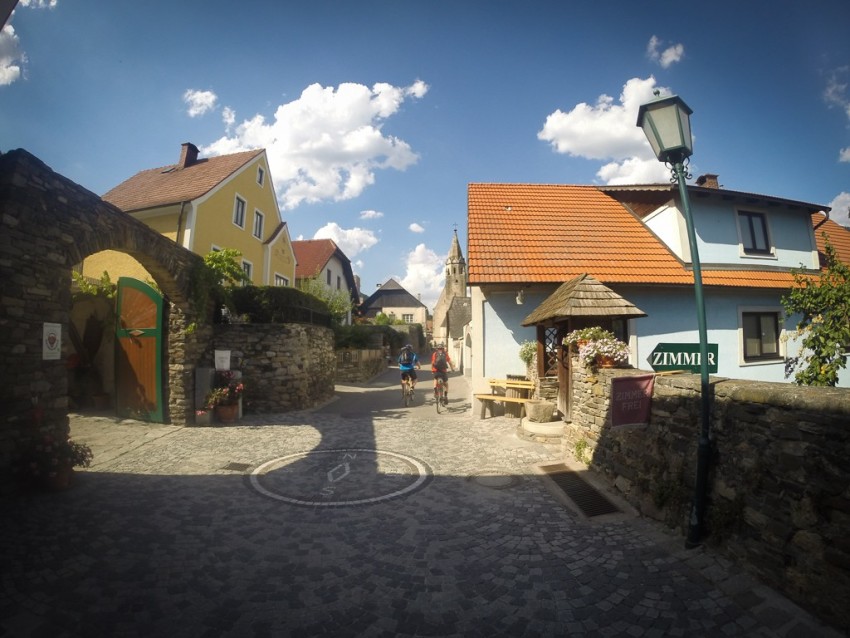 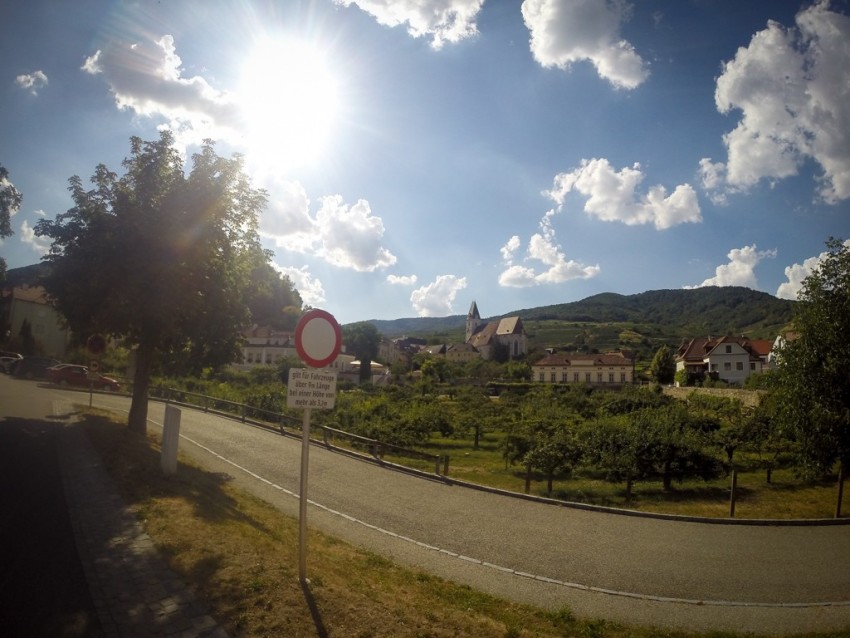 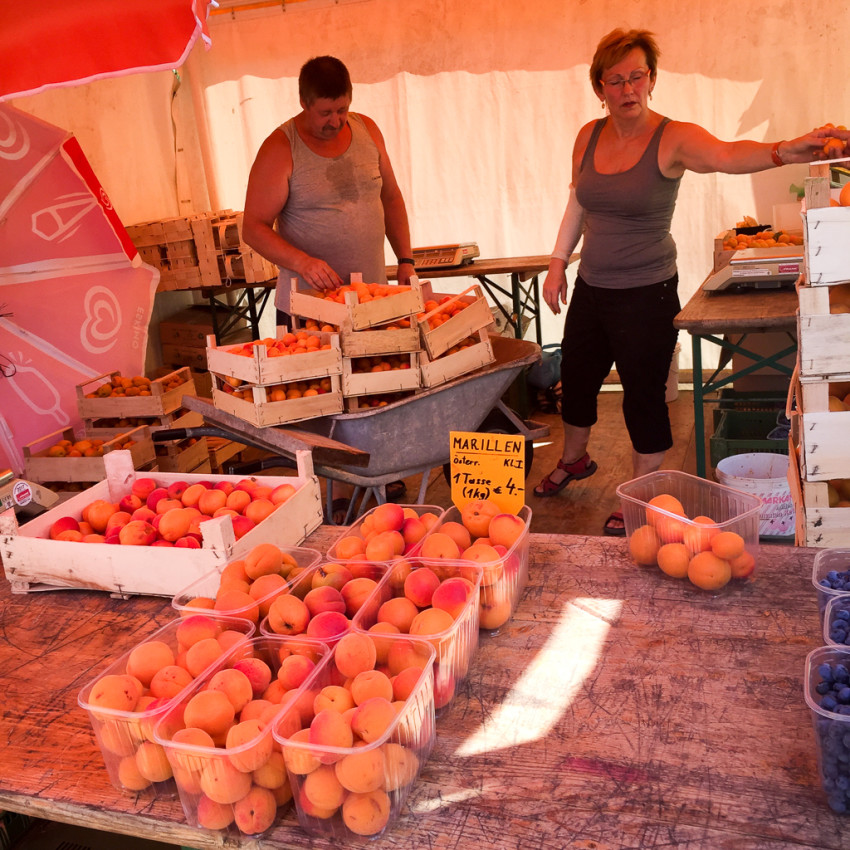 Apricots fresh from the farm in the Wachau Valley. © 2015 Ralph Grizzle

We pedaled along the gently rolling hills in this beautiful valley, with its uber-charming villages set among the vineyards and apricot groves. As we approached Weissenkirchen, we saw ms Savor making her way toward its docking place. We arrived in time to watch the ship dock, having made it safely and with little exhaustion but much exhilaration. Pete remarked that he would have regretted not doing the ride. 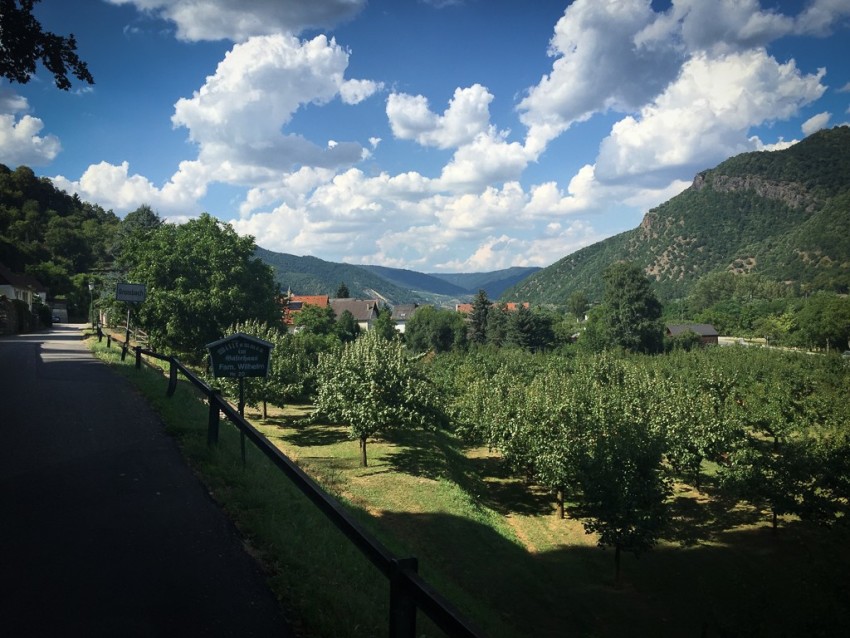 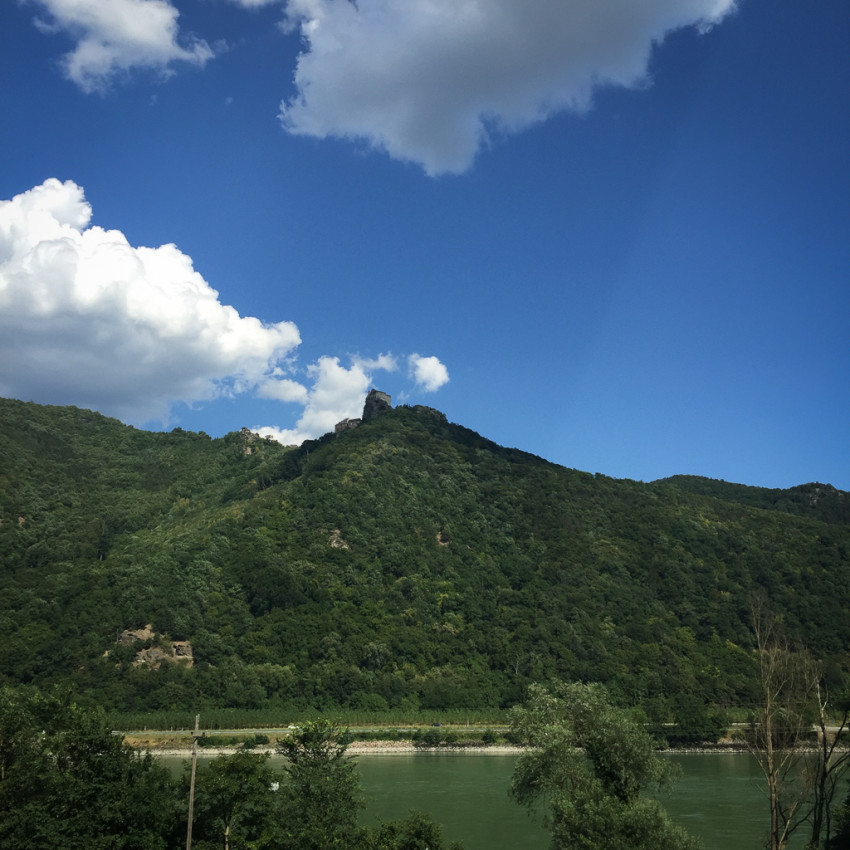 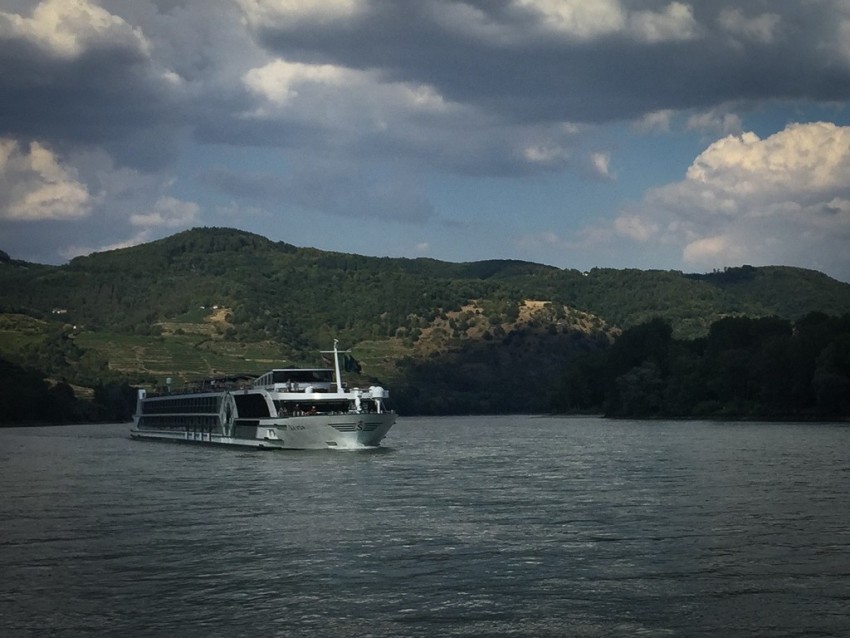 Our ride revealed something of the river that Pete had not experienced from the boat, not the least of which were the aromas of an Austrian summer, the flowers and vineyards and apricots and farmland. The ride also revealed something about Pete, and about me as well: We were a long way from congealing. We had put ourselves in motion, made “new trysts with life,” and we were indeed very much alive. 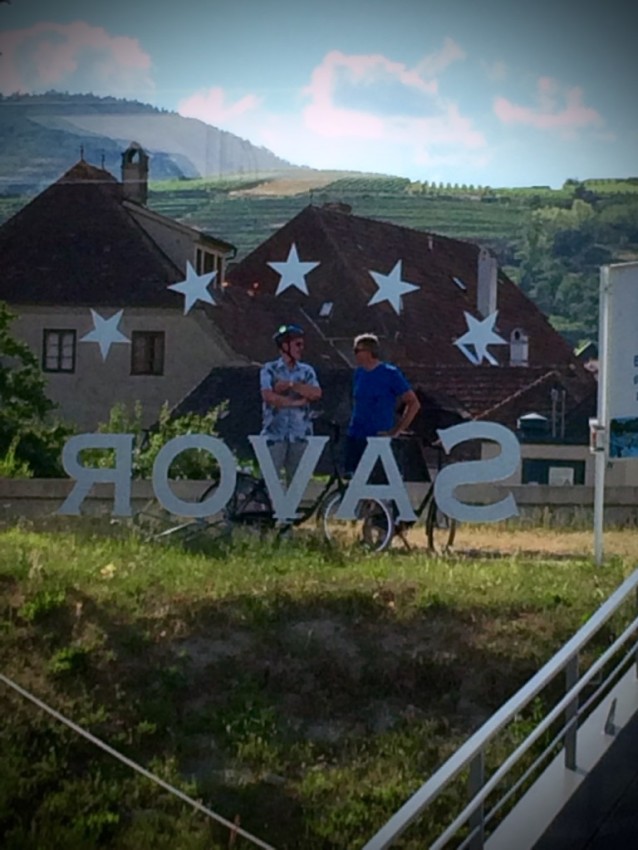 End of the ride in Weissenkirchen: Pete and I waiting for the gangway to be placed so that we could board ms Savor. © 2015 Lori

Share your thoughts on “Tauck’s ms Savor: Danube Reflections, The Wachau Valley, And A Guest Pedals Along With Me”