Posted on August 11th, 2015 by Elizabeth Cody in Outposts

When you think of “the Outback”, chances are you’re thinking of the iconic scenery and sights of Australia’s Northern Territory. With wide stretches of brushlands, towering rock formations, and hundreds of rare species of plants and wildlife, this is the “real Outback.”

About The Northern Territory

The Northern Territory boasts over 52 national parks and conservation areas, which protects the region’s 400 species of birds, 150 mammals, 300 reptiles, 50 frogs, 60 species of freshwater fish and several hundred species of marine fish. The climate in the Northern Territory is separated into two different climate zones; the north is split into green (October to April) and dry (May to September) seasons. The central and southern regions, home to the iconic monolith Uluru, are more of a desert climate, with very little rainfall (less than 9.8 inches annually). The Northern Territory does not recognize Daylight Savings Time, unlike South Australia. During the winter the two regions are in the same time zone, but in the summer South Australia jumps forward an hour.

The capital of the Northern Territory, Darwin is a small yet chic and cosmopolitan urban playground, home to residents from 50 different nations. Markets with products representing every nationality are a fantastic way to immerse yourself in the melting pot culture of Darwin, along with shops and cafes. Cultural performances often coincide with the delicious food offered at the markets, for a budget-friendly dinner and a show. If you’re looking to relax and frolic in the water, then walk down Smith Street to the footbridge and enjoy the Darwin Waterfront Precinct. The Waterfront offers sand, cafes, clear water, Wave Pool, and gourmet restaurants, all within walking distance of the town center!

For some quiet serenity in the hustle and bustle of Darwin, look no further than the George Brown Darwin Botanical Gardens. This 42 hectare green space showcases local flora and other tropical region plants, including monsoon forests, woodlands, and coastal foredunes, free for visitors. More iconic than its tropical flora is the saltwater crocodile for most Darwin visitors, and there is no better place to see them live than in Crocosaurus Cave. Besides Australia’s famous crocodiles, this reptile house also showcases 70 other species of reptiles and a turtle sanctuary. 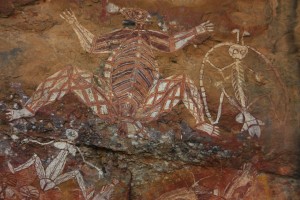 The ultimate example of the harmony between the Aboriginal people and the land they nurture and protect, Kakadu National Park takes up an area of almost 20,000 square kilometers and an UNESCO World Heritage Site. One of the most beautiful sights in the entire park is the Ubirr Rock Galleries, created by the Aboriginal people centuries ago. Walking along the flat one kilometer track, you can see the Aboriginal depictions of animals and spirits that were a part of their daily lives.

The Park also offers beautiful waterfalls, thriving wildlife, camping areas, and beautiful hiking trails. If you’re looking to cool off, then the Gunlom Plunge Pool is calling your name! The pool is near the camping areas and flat grassy land, perfect for picnics and relaxing in the water, or take walk around the area for fantastic birdwatching. There is a waterfall that flows into the pool, but only during certain seasons. The camping area in the park also has solar-powered shower facilities, which after a hard day of swimming, hiking, and wildlife watching, you’ll appreciate more than you can imagine. 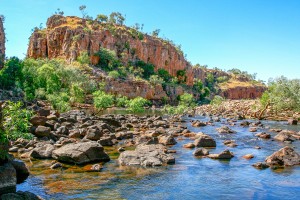 Due to the sparse population of the Northern Territory (211,000 altogether), the town of Katherine often feels much larger than it really is. The star attraction is definitely Katherine Gorge (Nitmiluk National Park), 30 minutes northeast of Katherine township. The park’s namesake is an impressive gorge cut through sandstone by the Katherine river, creating gorgeous waterfalls, rivers, and streams. On the banks of the Katherine River is a natural hot spring for visitors to relax in and soak in the warmth. Bushwalking, canoeing, and camping are all popular pastimes in the park, set to the musical babbling of the rivers and streams flowing in the Gorge. Katherine is accessible flying, driving or on the famous Ghan Railway.

90 miles north of Katherine is Pine Creek, a town established during Australia’s Gold Rush in the 19th century. That same pioneering spirit and history is still evident today, especially in the museum and charming vintage feel of the town. Because trains were so integral to the formation of the town and the gold mining industry, the nearby Pine Creek Railway Precinct is definitely worth taking a look, especially for the train lovers in your group. 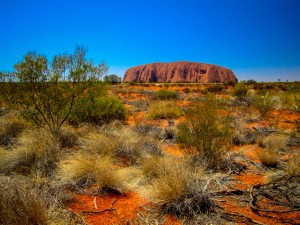 The original township of the Outback, Alice Springs owes its heart to the Aboriginal people, who have lived in the area for more than 50,000 years. In 1862 the town was discovered and became part of the Australian Gold Rush when gold was found in 1887. Known for colorful characters and experiences like the Camel Cup and Alice Springs Beanie Festival, Alice Springs is the heart of The Red Centre.

The red desert surrounding Alice Springs is home to the world-famous and iconic monolith of Ayers Rock rising from the rusty dust. Also known as Uluru, the giant rock formation in the Uluru-Kata Tjuta National Park is of significance not only as a symbol of Australia’s Outback, but also to the Aboriginal people, the owners of the land. Visitors can experience Uluru and its surrounding areas by vehicle with a guided tour and view all sides of the rock by foot, bicycle, or Harley Davidson. Watch the colors change at sunset on Camel, while sipping champagne at the Sounds of Silence Dinner or even view it from above with a scenic tour or Skydive! In the same national park are the 32 rock domes weathered by time known as the Kata Tjuta/The Olgas. These beautiful domes appear to change color with the rising and setting of the sun, creating a stunning natural show.