Xiamen is known as one of China’s “most livable” cities, and with its tree-lined beaches, countless attractions and lush surrounding countryside, it’s little wonder visitors are drawn here. Even if it’s for only a short stay, one should never miss the opportunity to visit the “gateway” to China. Located at the southeast coast of China, Xiamen is one of the major port cities in the Fujian Provence. Popular with both Chinese and international tourists, the city is famous for its island seascapes, subtropical climate, rich history and customs, and great regional cuisine.

Xiamen has been a major trading port for hundreds of years as it boasts a broad deep-water gulf, and thanks to its year-round temperate climate, isn’t subject to freezing or silting. This makes it a perfect port-of-call for commercial vessels and cruise ships alike. 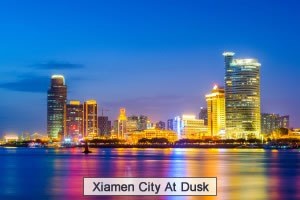 The city itself is comprised of Xiamen Island and Gulangyu Island, part of the rugged north bank area of the Jiulong River in the west to the islands of Xiang’an in the northeast. The city center is on Xiamen Island, which is divided into the Huli and Siming Districts. The city’s other districts, Haicang, Jimei, Tong’an, and Xiang’an, are all located on the mainland. Just east of Xiamen Island are the Jinmen Islands which are governed by Taiwan.

Xiamen has an array of attractions that cause visitors to flock to the area, among the most well known being Gulangyu Islet. This tiny area’s highest point is Sunlight Rock, a symbol of the city. With a clear blue ocean as a backdrop, the area’s trees and red roof tile architecture make it a particularly scenic place to begin exploring the city. Other nearby scenic spots include Shuzhuang Garden, Haoyue Garden, the Sea & Sky Palace Complex, Marine World, and the Piano Museum.

Xiamen Botanical Gardens is another favorite with visitors. Located on Wanshi Hill on Xiamen Island, it has a collection of more than 5,300 kinds of tropical and subtropical plants. Not to be missed is Jiageng Park located near Aoyuan Park. Its design features many elements of the Jiageng style. The park has a traditional courtyard dotted with ponds, ornamental footbridges, and stone railings that reflect the beauty and simplicity of traditional Chinese gardens. The famous South Putuo Temple is set among rolling hills near Xiamen University. Dating back to the Tang Dynasty, this Buddhist site is a national treasure and is sometimes referred to as the “Nanputuo Temple”. 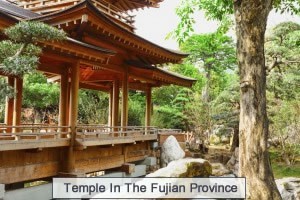 One of the city’s major thoroughfares and tourism hubs is Huandao Road. The road winds past many of Xiamen’s notable sites and institutions, including Yanwu Bridge, the International Exhibition & Conference Center, and Wuyuan Bay. It’s a major section of the Xiamen International Marathon, which is renowned for its coastal scenic course, and ranked as a Gold Label Road Race by the IAAF.

When it’s time to take a break for a meal, Xiamen has a wealth of choices. Besides local specialties, cooking styles from all over the entire country can be found here, making Xiamen an ideal place to experience the entire range of Chinese cuisine. Popular local styles are savory foods such as leaf-packed sticky rice, deep-fried leek, fried flat noodles, and shrimp noodles. Local delicacies such as peanut soup, dumpling soup, and candy sandwiches can be found everywhere.

Visiting Xiamen, even for a short stay, has never been easier. As of April 1, 2015, the 72 hours visa-free transit policy has been adopted at Xiamen’s Gaoqi International Airport (XMN). Passport holders from 51 countries can enjoy up to 72 hours of free transit when they make an international transfer at the airport.

For more information on Xiamen City and Xiamen Airlines, visit them online at www.apg-usa.us/xiamen-airlines.