Next Up, On Crystal Symphony With The President & Exploring Greenland With Silversea | TravelResearchOnline

Next Up, On Crystal Symphony With The President & Exploring Greenland With Silversea

Posted on August 14th, 2015 by Ralph Grizzle in Deck Plans

It’s beautiful in the Baltic Sea region. Just a few days ago, newspapers in Stockholm proclaimed that summer had finally arrived. That’s a bit late, and of course, summer will be short-lived way up here in the high north. 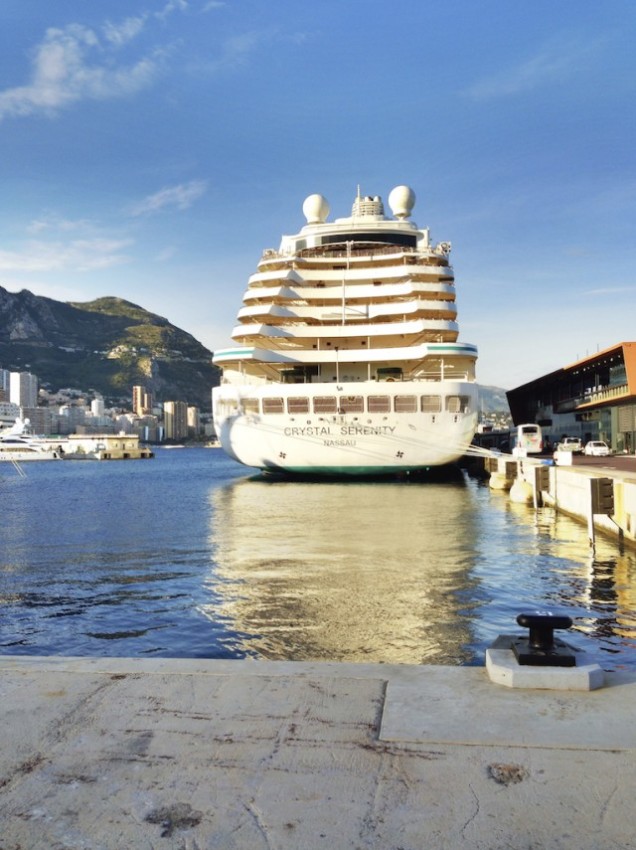 Bathed in the evening sunlight while docked in Monte Carlo, Crystal Serenity. Step inside for world-class cuisine. © 2014 Ralph Grizzle

As I write these words, however, the sun casts its golden glimmer on the glittering body of water that separates Denmark and Sweden. From the 12th-floor Executive Lounge of the Copenhagen Airport Hilton, I can see the bridge that unites these two countries. I won’t be up here long. It’s too beautiful outside to sit indoors.

Next Sunday, I’ll be departing Copenhagen on Crystal Symphony, along with top-producing travel agents and Crystal Cruises’ President & CEO Edie Rodriguez. We’re on a 7-day Gala cruise roundtrip to Copenhagen. The event is designed to recognize and celebrate Crystal’s top achievers, cruise sellers who have put a lot of people on Crystal’s two ships.

There has never been a more exciting time in the history of Crystal Cruises to be sailing with the president. I plan to bend her ear to learn as much as possible about what may just be the most ambitious expansion ever in the luxury travel segment. Just a few weeks ago, Crystal announced three new 1,000-guest ocean ships (with 48 private “homes”), two new river cruisers, a new luxury yacht, a submarine, and a jet, plus more I am sure. I know that Edie can’t reveal too much for competitive reasons, but I plan to learn as much as I can while onboard with her for seven days. Maybe I can slip some Aquavit into her tea to get her talking.

I’ll be handling Avid Cruiser’s “Live Voyage Report” differently on the upcoming voyage — and future ones as well. My plan is to post a few “postcards” each day, featuring photographs that tell the story of our best experiences of the day on Crystal Symphony. If you want to follow along, hit me up on Instagram, Twitter and Facebook. Following the cruise, I’ll post daily voyage reports to give you a feel for what it is like to experience the Baltic on Crystal.

What are some of the things we’ll experience? Crystal Symphony will take us to Warnemunde (where excursions to Berlin are offered if we so choose). We’ll call on Helsinki and St. Petersburg, where we’ll overnight on board.

My goal, however, is to focus quite a bit on the ship experience itself — and to coax as many details as possible out of Edie about Crystal’s expansion plans.

Just a few days after I return to Copenhagen, I trundle my baggage aboard Air Greenland. Fewer than five hours taking a seat on the plane, I’ll land in Kangerlussuaq for a quick transfer to Silver Explorer. I’m excited to be visiting Greenland for the third time. Details about my Greenland voyage can be found here.

In the meantime, Aaron Saunders has written a piece about Silver Explorer, which celebrates seven years in operation for Silversea Cruises/Expeditions. Be sure to see Silver Explorer: Luxury Expedition Cruising Pioneer.

You may want to check out our sister site River Cruise Advisor, where this week we’re discussing All-Inclusive River Cruises: Are You Getting Your Money’s Worth? Plus, Uniworld & Scenic Compared, And Low Water Woes.

Share your thoughts on “Next Up, On Crystal Symphony With The President & Exploring Greenland With Silversea”