The Arctic vs. Antarctica: Which One Should You See First? | TravelResearchOnline

The Arctic vs. Antarctica: Which One Should You See First?

Posted on August 7th, 2015 by Ralph Grizzle in Deck Plans

One thing that surprised me when I ventured up to Arctic Svalbard with Silversea Expeditions last month: the number of comparisons between the Arctic and that other famous polar destination, Antarctica. 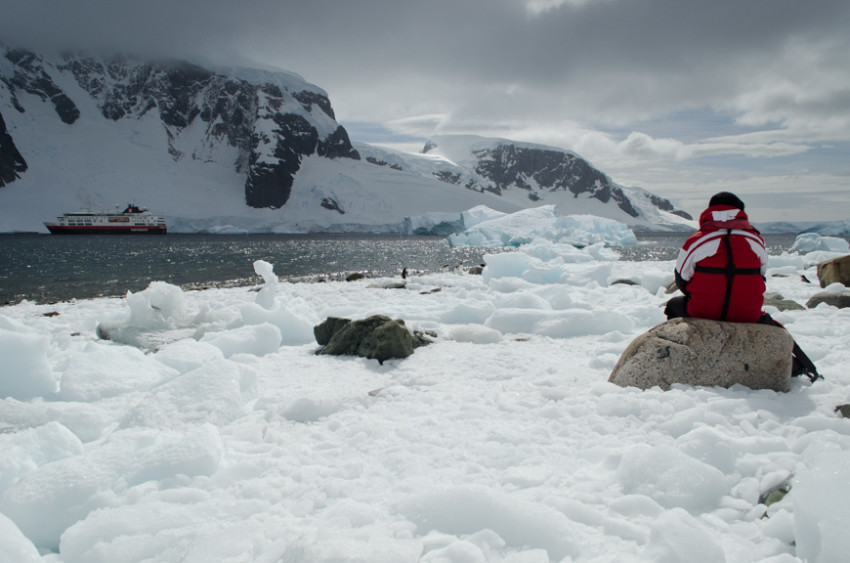 Guests who had never been to Antarctica were curious as to how the two compared. Guests who had previously been to the famous White Continent outlined the differences. And of course, the question on everyone’s lips was, “which one is better?” 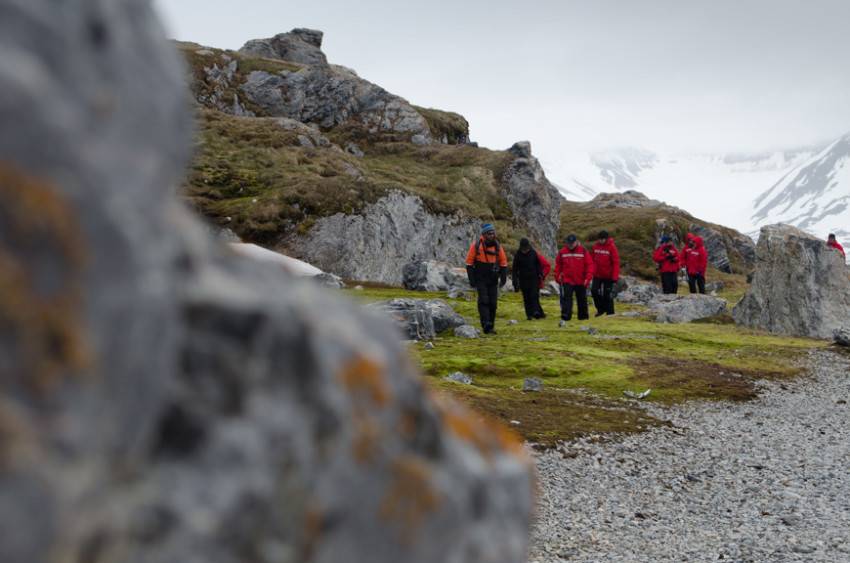 I sailed to Antarctica in January aboard Hurtigruten’s FRAM. Together with the Arctic, it had been my dream destination for as long as I can remember. After having experienced both, I can honestly say that each are life-changing experiences in their own right. But there are some important distinctions. 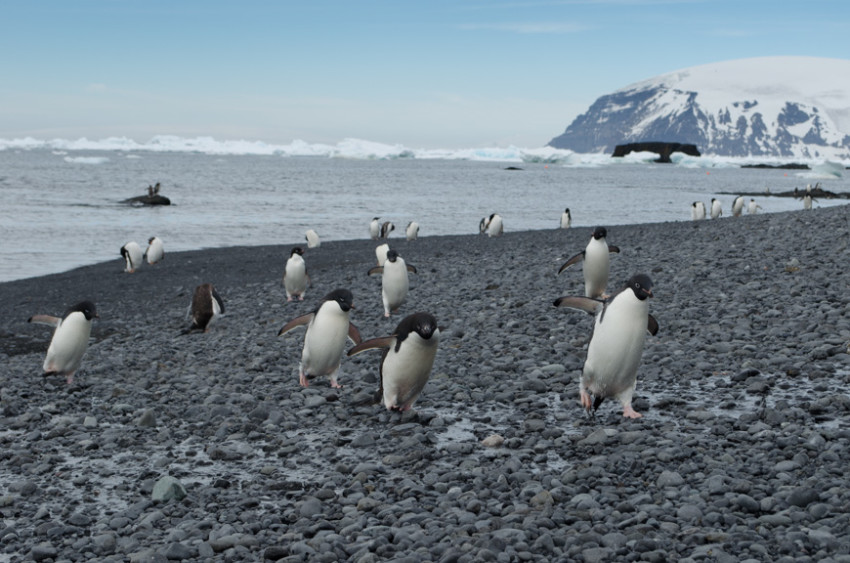 There’s No Getting Around It (or Them): Penguins are everywhere in Antarctica! Photo © 2015 Aaron Saunders

Let’s get the obvious distinction out of the way first: the Arctic is the home of the Polar Bear. If you’re in the market for some cute, cuddly Penguins, you’ll want to go to Antarctica.

In fact, if you’re a lover of wildlife in general, the Arctic wins for sheer diversity – there are more birds, mammals, and animals here than in Antarctica. The trick is, they’re much harder to find. You can spend an entire voyage without ever seeing a polar bear. On our Silver Explorer voyage, we saw but two – almost at the end of the trip. However, the sheer array of birds and marine life we saw made up for that. 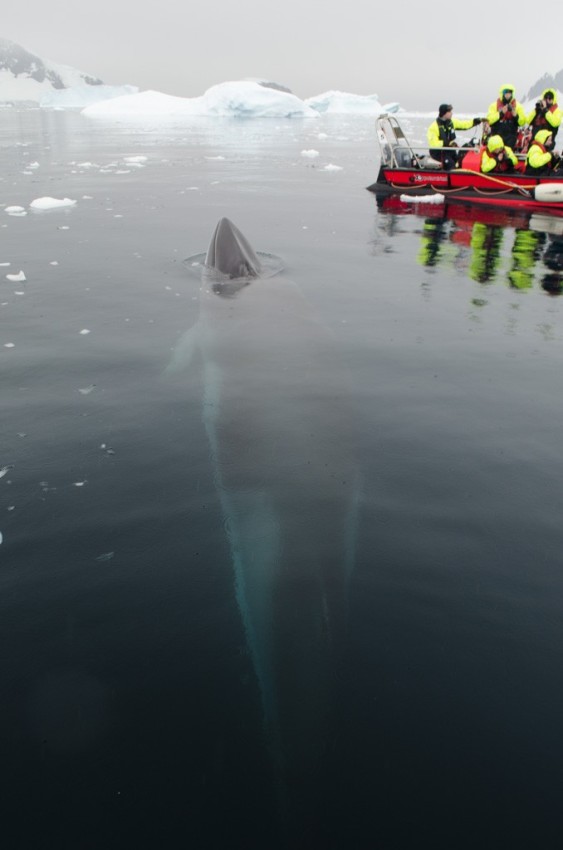 An Impossibly Fantastic Sight: a whale, visible beneath the surface of the water, comes up next to our Zodiacs in Antarctica. Photo © 2015 Aaron Saunders 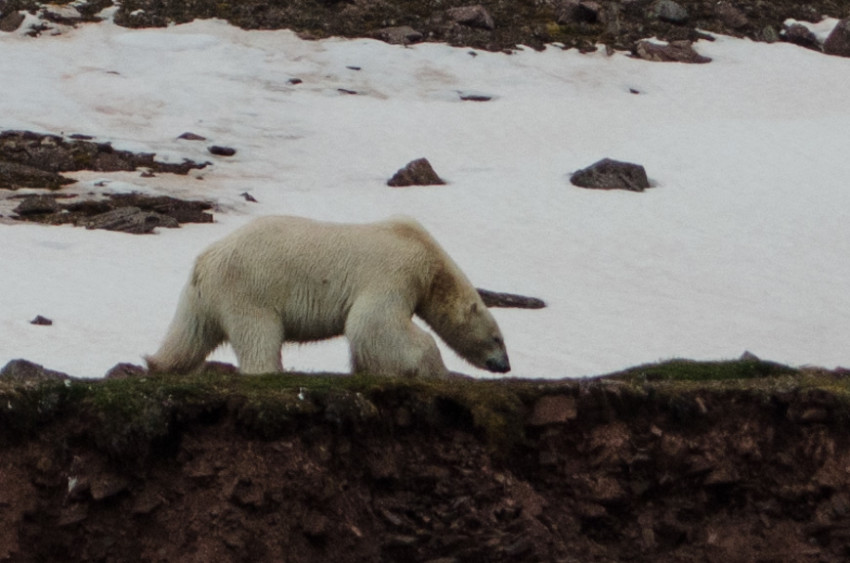 Polar Bears are found in the Arctic; though sightings are scarce and can’t be guaranteed, the hunt is half the fun. Photo © 2015 Aaron Saunders

Antarctica, however, wins for quantity. You’ll see penguins everywhere. You’ll view whales so frequently that you’ll wave them off if they’re in groups of less than a dozen and not as close to the ship as you’d like. “Bah! There’s only fifteen of them” is what you’ll catch yourself saying as you turn back to your drink. 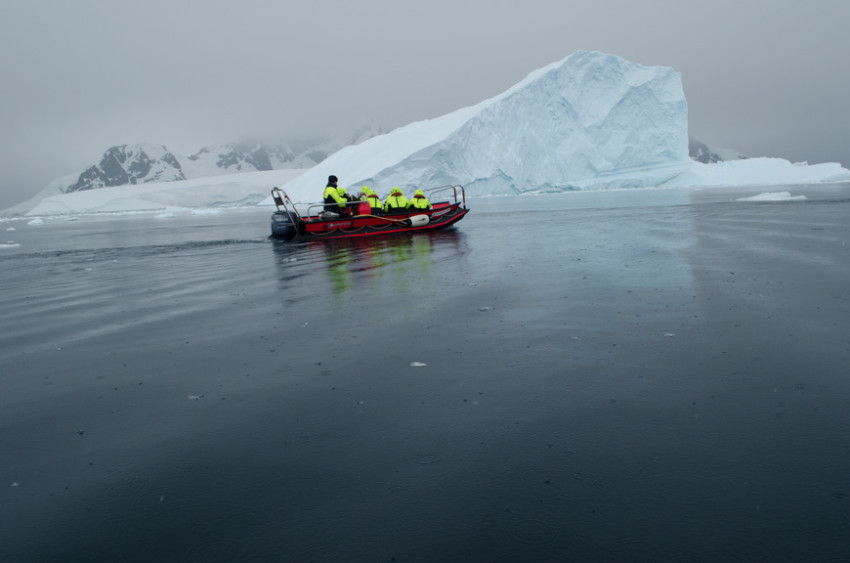 If you’ve seen pictures of majestic icebergs towering above the small black speck that is a cruise ship in tourist brochures, congratulations: you’re seeing Antarctica.

In fact, the primary feature of the Antarctic landscape, in most cases, is ice. That’s followed closely by snow so thick and deep you can slide down it, even in the midst of the Antarctic summer.

Most parts of the Arctic, by comparison, typically have less ice and almost no snow during the summer months. The Arctic, however, does have one huge advantage for ice lovers: pack ice. In the Arctic Svalbard, if conditions allow, your ship will likely make a stop up in the pack ice of the polar ice cap that exists above 80°N latitude. 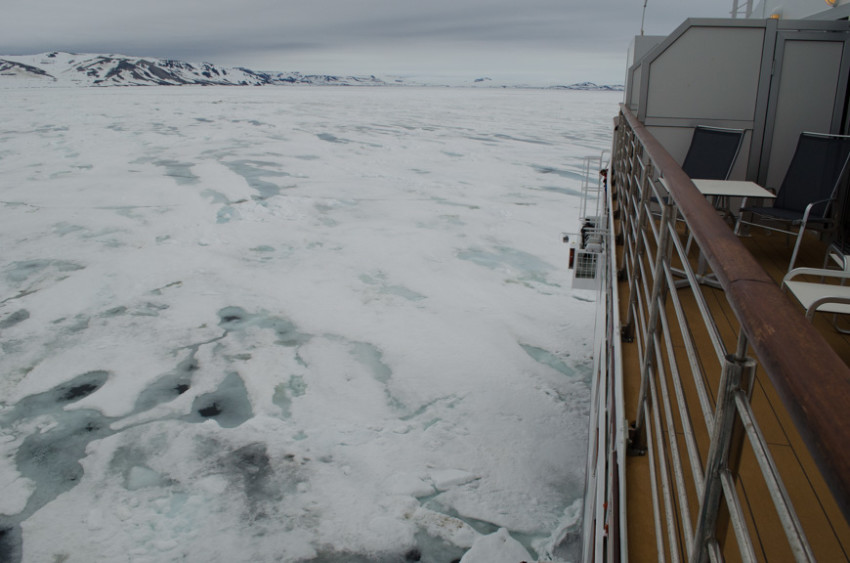 … but wedging into the polar ice cap in the Arctic is pretty special, too. Photo © 2015 Aaron Saunders

What the Arctic does have going for it that Antarctica doesn’t: life. Albeit very small life, but life nonetheless. The Arctic is a veritable forest of lichens, mosses, and impossibly tiny flowers that can only best be seen from a crouching position at best. But the possibility of life in this improbably harsh environment – and a splash of colour in an otherwise grey environment – truly gives the Arctic a special beauty.

It’s (Not) Going To Be Cold 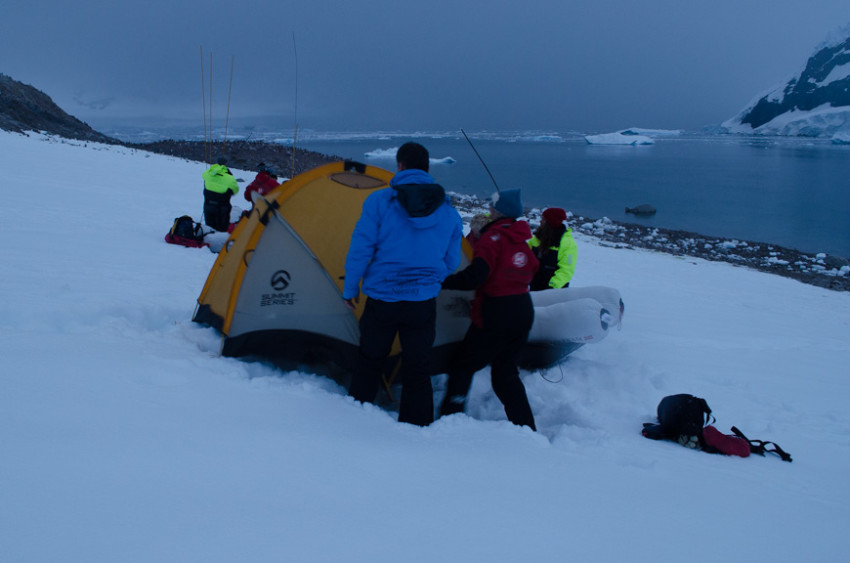 It’s warm enough in Antarctica during their summer months (the Northern Hemisphere’s winter) that camping in Antarctica is possible. Photo © 2015 Aaron Saunders

Now, I’m aware that “cold” is a relative term. I meet people from Arizona who say the Mediterranean in the middle of July is a little “cool” for them, as my body systematically squeezes out any remaining liquids from my pores in a bid to not overheat.

But the fact remains that both Antarctica and the Arctic are similarly matched in terms of temperature. Will you need a parka (usually provided), gloves, scarf, and a hat? You betcha! But it will be far warmer in Antarctica than most North American cities.

Why? Cruises to Antarctica typically depart between November and February of a given year. Since Antarctica is in the Southern Hemisphere, these sailings take place during our winter, and their summer. That means, on average, you can expect temperatures in Antarctica to be anywhere from -10°C (14°F) to 10°C (50°F). 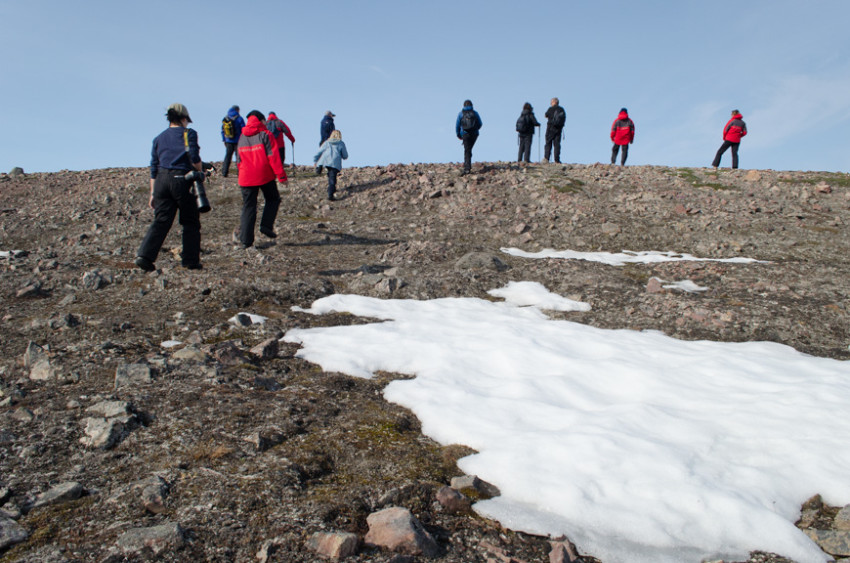 In the Arctic, you’ll have to wear a coat – but you’ll find yourself unzipping it quite a bit. Photo © 2015 Aaron Saunders

Cruises to the Arctic typically take place in June, July and August – the Northern Hemisphere’s summer. In this case, it’s mainly cold because of how far north you are. Typical temperatures range from 0°C (32°F) to 10°C (50°F) – depending, of course, on where you are. If you’re right next to an ice floe or the polar ice cap, expect the temperature to drop by as much as ten degrees Celsius.

Still, consider this: This past February, citizens in the Canadian city of Toronto suffered through daily average temperatures with windchill that approached -40°C, which is actually also -40°F. Had someone from Toronto been in Antarctica in February of 2015, they would have experienced weather that was nearly 40 degrees Celsius hotter.

It’s not just Canada; New York residents awoke on Friday, February 20th to a temperature – without wind chill – of 2°F (-17°C). They would have warmed up nearly 20 degrees Celsius had they been in Antarctica.

So the myth that Antarctica is cold? Absolutely true – but not during their summer!

I Get Seasick. Which Destination Is Smoother? 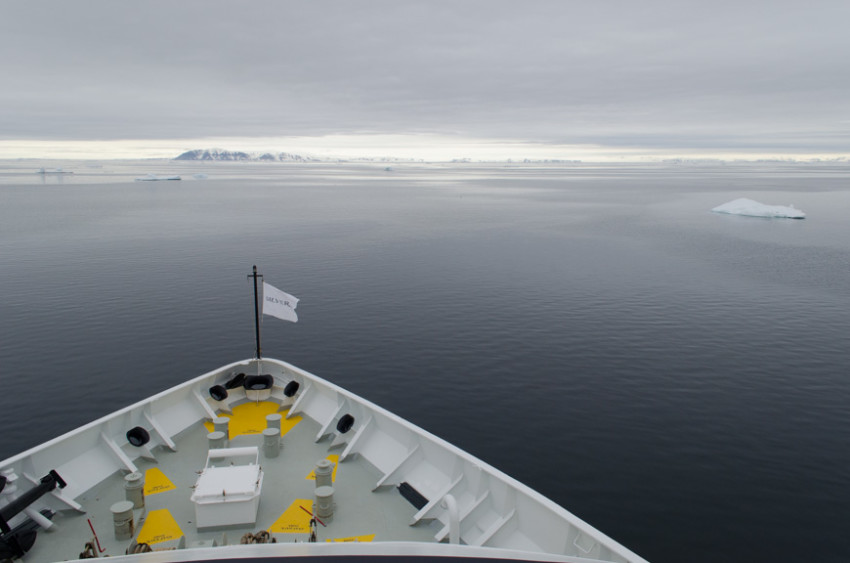 The Arctic can be rough, but on our sailing it was like a pond. Photo © 2015 Aaron Saunders

Seas in general are unpredictable. Storms can crop up at any time, anywhere – even in the typically calm waters of the Caribbean. Good weather – and rough weather – cannot be guaranteed.

Except in Antarctica. In order to reach Antarctica from Ushuaia, Argentina, you must first cross a section of water known as the Drake Passage. Located at the confluence of the Pacific and Atlantic ocean currents, the Drake was notorious among early sailors for its stormy reputation. Many ships that went ‘round the horn’ never did make it. 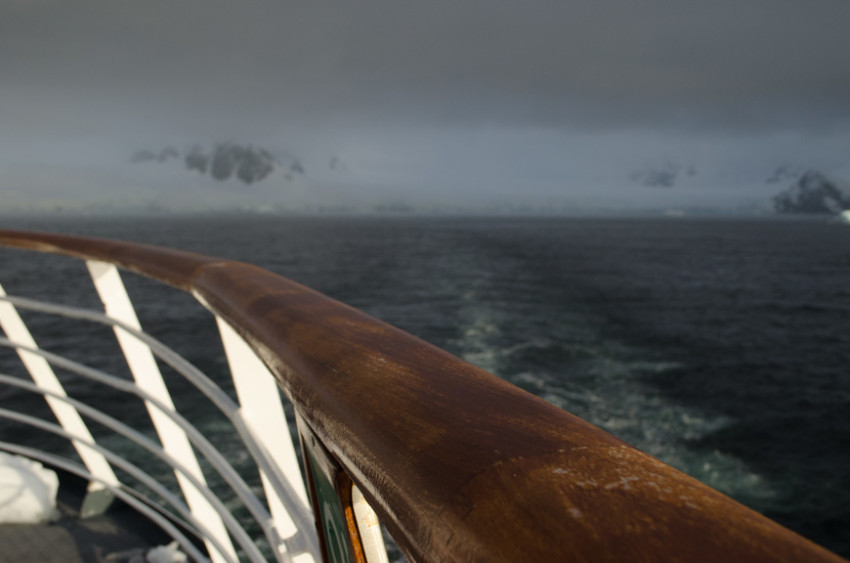 Crossing Antarctica’s Drake Passage can be much stormier… packing some good seasickness remedies is a must. Photo © 2015 Aaron Saunders

Today, advances in shipbuilding and technology ensure that the passage is safe – but it can be bumpy. Very bumpy. On my crossing, 26 foot seas and Gale Force 9 winds were the watchwords of the day – and my understanding is that we got off pretty easy.

So if you’re very prone to seasickness, the Arctic might be a better bet. But having said that: the thrill of seeing Antarctica is worth two days of seasickness, and then some. And once you’re at the Antarctic Peninsula, the seas calm down completely.

So Which Destination Is The Best? 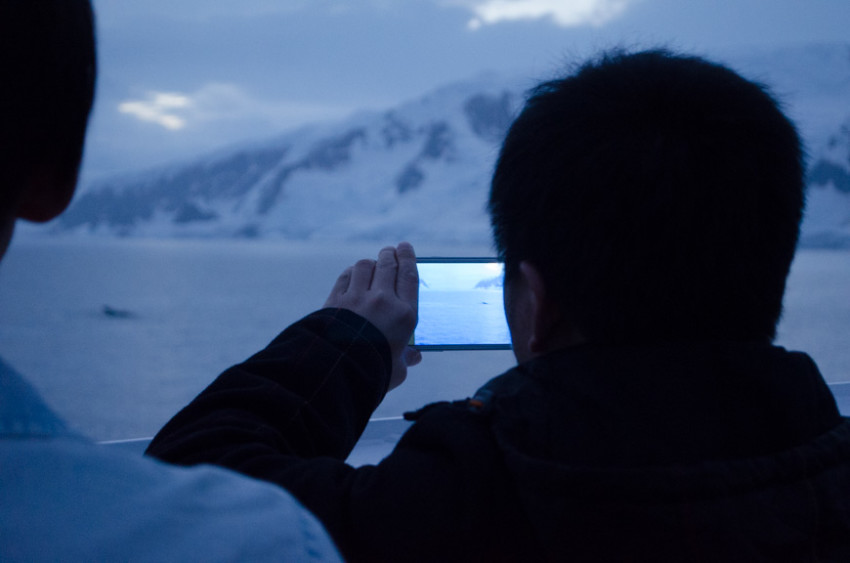 In Antarctica, you’ll find yourself up at two in the morning, taking pictures of whales breaching. Photo © 2015 Aaron Saunders

The question that has no answer. Both destinations are stunning in their own right. You simply cannot visit either and fail to be impressed, moved, and absolutely floored by the spectacular beauty of two of the world’s most remote places.

My recommendation: go to whichever one interests you the most. Then decide if you want to do the other. Chances are good that once you’ve seen the Arctic, or the Antarctic, you won’t be able to get it out of your head. But read up first: explore the history of these unique places. Learn the stories of the men who gave their lives trying to explore them. In Antarctica, Roald Amundsen succeeded. Robert Falcon Scott failed. And Ernest Shackleton beat the odds and managed to escape. 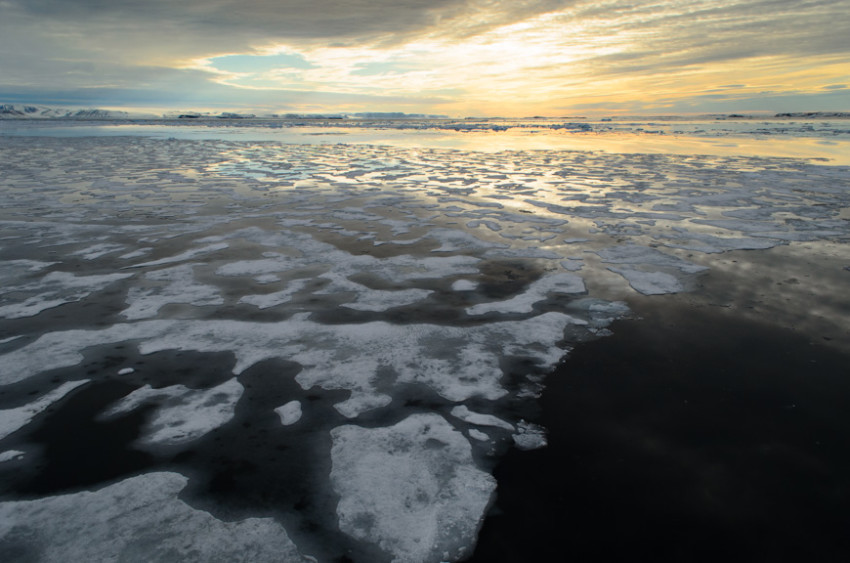 At two in the morning in the Arctic, you’ll catch yourself admiring the famous Midnight Sun. Photo © 2015 Aaron Saunders

In the Arctic, Roald Amundsen conquered again. S.A Andree and his so-called “Ice Balloon” failed. Sir John Franklin spectacularly failed – but not before being trapped in the ice of the present-day Canadian Arctic for three consecutive winters.

The truth of the matter is that no matter which one you pick, the Arctic and Antarctica are two of the best experiences you can have on this planet.

Share your thoughts on “The Arctic vs. Antarctica: Which One Should You See First?”