Discover The Fairytale World Of Prague With Foreign Independent Tours

Posted on September 29th, 2015 by Cassie Mayhew in Outposts

The city of Prague is one of the most mesmerizing cities in the Czech Republic. In recent years, the city underwent major updates to both modernize the city and showcase the classically historical side of Prague as well. Prague is one of Europe’s most prominent travel destinations, welcoming in some 6 million visitors a year! Also known as the City of a Hundred Spires, Prague will entrance you with its fairytale-like splendor as you meander along the cobblestone paths and admire the intricate architecture, much of it centuries old. This Czech Republic city provides something for every kind of traveler, allowing you to soak in the vibrant culture of the locals during the daylight hours, and spend the dusk at one of the multitude of trendy clubs and art galleries. Prague’s decadence will not only prove intriguing, but also entice you to indulge yourself as you explore this majestic city. 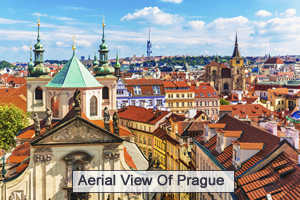 Many of the attractions in Prague celebrate the rich astounding of the city while simultaneously complimenting the more modern aspects. With many opportunities for sightseeing, you will begin to take in the full diversity of Prague. For that true fairytale-like atmosphere, there truly is no better place than Prague: the Czech Republic has the highest densities of castles in the world, and most of them residing right in Prague. During your stay it is recommended for you to purchase the Prague Card, a sightseeing pass that will unlock almost every attraction in the city. The card guarantees you free entrance to 50 of Prague’s top attractions, a free two-hour bus tour, free public transportation, and so much more. The Prague Card is the ideal way to sightsee while also saving time and money during your stay.

Start by taking a visit the famously bizarre Miluniæ and Gehry’s Dancing House. This favorite building is known for its quirky architecture, and one of the newer attractions built in 1996. Miluniæ and Gehry’s Dancing House was originally created and designed to serve as a symbolic reminder of the changes that the city has undertaken since the fall of the Communist party. The dancing house was constructed with 99 concrete panels which vary in size and shape, creating its unique form. Though the inside of the building holds little interest, the exterior is a popular photo spot for visitors to admire the outstanding architecture. The building creates a stark contrast to Prague’s traditional Gothic architecture, which stirred up a great deal of controversy in the city at its construction. The building is now loved and cherished by those in Prague, so much so that its likeness is even printed on a coin.

The Old Town Square sits nestled within the heart of Prague, its home since the 11th century. The town square is a favorite among tourists, not only for its magnificent architecture and rich history, but also for its dynamic marketplace. Colorful houses, contrasting with the more traditional Gothic architecture of nearby buildings, border the square. The Old Town Square is an excellent place for lunch or coffee on one of the many outdoor patios. Many attractions can also be accessed from the Square, such as the Kafka Museum and the Gothic astronomical clock. 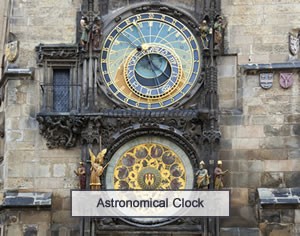 While you’re in the Old Town Square, take some time to explore the Prague Astronomical Clock. Also known as “Prague Orloj”, this medieval astronomical clock is over 600 years old, originally built in the 15th century. It now resides on the southern wall in the Old Town Square, the best place for visitors to gather to watch the clock’s show every hour. This Astronomical Clock does not display the time of day but rather the different phases of the moon and equinoxes. Every hour, the clock shows images of Jesus’ 12 Apostles at the top of the clock along with the four most despised vices of the 15th century. The four figures are Vanity, Greed, Death, and Entertainment, and the show lasts around 3 minutes in its entirety. For those hoping to see the inner working and mechanisms of the clock, you can climb the tower and even get a panoramic view of Prague in its full splendor.

Appealing to both children and the child within, one of the most fun experiences in the city must be the Prague Toy Museum. The museum houses toys from all over the world from different time periods, with the earliest toy dating back to the times of ancient Greece. The museum spans seven rooms over two floors, one of the biggest exhibits of its kind. One of the most popular exhibits is the Barbie collection, where visitors can view the dolls in chronological order and see the changes in clothing and style as the years pass. Other popular exhibits in the museum include the teddy bear and mechanical toy trains; however if you’re looking for more traditional Czech toys, you’ll find them scattered all over the museum.

For those looking for a unique adventure, Kostnice Ossuary, also known as the Church of Bones, is a truly one-of-a-kind experience. This church is adorned with the skulls of 40,000 human skeletons killed by the Black Death plague. Those whose bones remain in the church asked to be buried there, to honor the connection of Kostnice Ossuary as a sacred place. The church’s chandeliers were crafted by using every bone in the human body, a visual display of the beauty that can come from death. The church is not only an amazing feat of artistic talent, but also a religious landmark promoting peace through worship. Before you visit, take some time to read and research the background and history of the church.

To learn more about Prague and Foreign Independent Tours, visit them online at www.fittours.com.