Discover “The Capital of the North” Manchester with Flybe | TravelResearchOnline

Discover “The Capital of the North” Manchester with Flybe

Posted on October 6th, 2015 by Elizabeth Cody in Outposts

Considered to be England’s second city after London (although a local would argue the contrary), Manchester is a fun mix of historical culture and heritage mingling with modern gastronomy, cocktails, and trendy dance clubs. This dynamic city has an attitude all its own, reveling in the fun while simultaneously preening over its historical significance. The locals are always ready with a cheeky grin and ready to direct you to their favorite sight in the city or, if you ask nicely, their favorite pub for a pint. 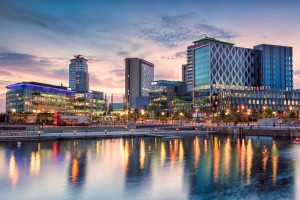 Manchester began as a Roman territory in the 1st century CE, but wasn’t fleshed out into a full town until the 13th century. The city has always been radical and rebellious, supporting Parliament in the Civil War and the Jacobite forces in the 18th century. Manchester found its true stride, however, with the tidal wave of progress that was the Industrial Revolution. Manchester already had a thriving cloth trade, and with new innovations in spinning and a damp climate that prevented explosions from cotton dust, a huge fabric industrial boom was born. Once the fervor of the Industrial Revolution died down, Manchester moved to making its mark on the British music scene, with bands such as The Fall, Oasis, The Smiths, and Badly Drawn Boy.

There are plenty of choices for getting around Manchester, and a wise investment would be to purchase the A-Z map, which shows the entirety of Manchester in book form for convenience. If you’d rather use public transportation, Manchester has buses, trams, taxis, and trains available for visitors to utilize. The Metroshuttle bus is free for the public and runs three different color-coded routes; as a bonus, the buses are now all hybrids in a bid to cut down on pollution. The Manchester tram system, known as the Metrolink, runs seven different routes but can be expensive, so consider buying the day pass for £5 if you plan on using it continuously throughout the day. Taxis are significantly cheaper here than in London, and you can either hail one from the street or book in advance. The train will take you all over the Greater Manchester area, so if you’re planning to take multiple longer journeys, consider purchasing a day pass for £4.40.

Another Perpendicular Gothic building well worth the visit is the John Rylands Library. This library is a gift from Henriquetta Rylands, a wealthy widow in memory of her husband John. The library is unique in not only architecture, but in collection; a portion of the New Testament, part of St. John’s gospel, is on display here and dating back as far as the first to second century CE. 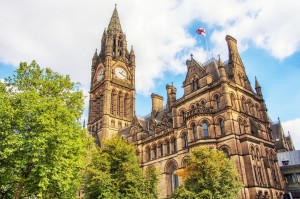 A different take on Gothic architecture can be found at the Manchester City Hall, constructed during the Industrial Revolution in a neo-Gothic style. Free tours are available for all areas not currently in use; make the effort to see the pre-Raphaelite wall paintings in the Great Hall, depicting Manchester’s expansive history.

For a more modern look at Manchester, start with the Village. This area around Canal Street is known for its acceptance and inclusivity of all people who stroll through its streets, most especially the LGBTQ community. This carefree atmosphere has made the area a popular nightlife district, with bars and clubs filled with straight and gay patrons alike exhilarating in the late night hours. Every year on the last weekend in August the Village hosts a spectacular Pride Festival, which raises money for different charities.

If you’re interested in rubbing elbows with the upper-crust of Manchester, venture forth to either Chorlton or Didsbury. Both of these affluent suburbs are filled with upscale restaurants, pubs, bookshops, and boutiques, plus more small and trendy shops for whatever you’re looking for. If the weather is pleasant, consider eating your meal outside for some fascinating people watching.

To learn more about Manchester and Flybe, visit them online at www.apg-usa.us/flybe.