Today’s message has little to do with travel, and a lot to do with your social status.

In not so many words, the Social Buffoon Curse sounds like this: “You think that is cool, wait until you hear what I have to say.” It shows its ugly face when one person in a group shares some good news only to be trumped by the next person’s “exciting information.” The other people in the group immediately interpret this as a sign that it is time to play “one-upmanship.”  END_OF_DOCUMENT_TOKEN_TO_BE_REPLACED

I hope you enjoy the first in our series of destination videos. Featured in this episode: Dubrovnik.

But you can do a lot in addition to seeing the Old City. Join me as I take you for a tour inside the city walls before heading out to the countryside, where we’ll go for a spin on a bike through the beautiful Konavle valley and then head north to taste a few local delicacies along the Dalmatian coast. END_OF_DOCUMENT_TOKEN_TO_BE_REPLACED

Have no fear, luxury is here
by Marti Litwin

While working in the travel business, I have noticed a few “fear based” notions when it comes to luxury.  First of all, it seems that many people tread lightly or are initially apprehensive to sell a luxury product, usually for fear that will eliminate the client’s interest in working together.  If your advice comes with a lofty price tag, that could be alienating to a newer client that cannot afford it or may perceive your services as not worth the money. This is completely understandable from the client and agent perspectives, as we would never want to scare anyone away!  This scenario, however, is usually avoidable by qualifying the client, asking for previous travel experiences, and of course determining their travel budget. END_OF_DOCUMENT_TOKEN_TO_BE_REPLACED

Seven Words To Live By
by Mike Marchev
November 5, 2015

Here are three questions to ask yourself:

• How Can I Add More Value To My Relationships?

• What Makes Me Different?

• How Can I Get and Keep My Client’s Attention?

The answer consists of only seven words. It’s true, and I arrived at that conclusion after witnessing two recent events.

The first revelation came as a result of meeting a man at a trade show booth. After swapping business cards, I told him that I would be getting back to him. When I called him the next morning, he said the following… END_OF_DOCUMENT_TOKEN_TO_BE_REPLACED

About Marketing: shrewd marketing starts after the sale is made. Once the sale is completed, many customers suddenly feel they’re not getting the same attention they got when the sales person wanted their business. While marketing to new customers is good business, maintaining current customers is even better business.

About Selling: too much focus on the sales presentation causes sellers to talk rather than listen—but it is the listening that reveals the customer concerns that can lead to a sale. Apply the 80/20 rule to sales presentations; have the customer do 80% of the talking to the seller’s 20%. END_OF_DOCUMENT_TOKEN_TO_BE_REPLACED

The following examples provide some useful guidelines for generating discussion with your employees:

END_OF_DOCUMENT_TOKEN_TO_BE_REPLACED

Honeymoons Designed – Nana (bye-bye in Tahitian) until next time!
by Stephanie Cannon

Wow, time flies. I cannot believe that 2015 is coming to a close. Where has the time gone? It seems like yesterday I was writing my very first diary, and now sadly my last.

I have thoroughly enjoyed writing for Travel Research Online this year and would like to thank them for considering, and asking me, to be a part of the 2015 series. I hope you all have enjoyed reading the various posts and gleaned actionable information from them. I know that I have learned a great deal from my fellow writers, which has helped spark new ideas for me going forward. END_OF_DOCUMENT_TOKEN_TO_BE_REPLACED

There’s never a boring day for me! I’m always busy and always thinking of new ways to support our Travel Leaders Franchisee’s! My focus is to help them grow their business by supporting and developing programs and tools for their Host Agency program. I interface with multiple audiences that include existing Agency Owners, Managers, and Independent Contractors (ICs), as well as prospective ICs, industry Host experts, and vendors. Not to mention a smart and proactive internal team at TLFG! I am most proud of the newly launched Travel Leaders Hosts website which links ICs to Owners. I love being that middleman and seeing the success stories emerge! END_OF_DOCUMENT_TOKEN_TO_BE_REPLACED 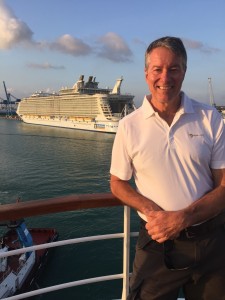 Ralph Grizzle began his journalistic career at the age of 32, following the conclusion of what he calls his ‘sabbatical decade.’ From 1980 through 1990, he bicycled across America, pedaled through Europe and island-hopped the South Pacific. After backpacking through Bali, bussing through Java, hopping a boat to Singapore and crossing Malaysia to Thailand, Ralph flew into Burma, tramped to Dhaka, and endured a 32-hour train ride from calamitous Calcutta to bustling Bombay. From there, Ralph hopped a plane for Greece and traveled to Switzerland before returning home, where he settled, quite naturally, into a career of travel writing.

From 1996 to 2009, Ralph contributed to HEMISPHERES, United Airlines’ award-winning inflight magazine. The North American Travel Journalism Association awarded his article, Ship Shape, which appeared in the September 2005 issue of Hemispheres, in the category of ‘Best Cruise Writing.’
END_OF_DOCUMENT_TOKEN_TO_BE_REPLACED

Why People Object
by Mike Marchev

They See No Need. This may or may not be true, but if they don’t see a need for what it is you are representing, you have your work cut out for you. You can give it a shot, but my money is against you on this one.

They Lack Important Information. This is understood, and the solution is to provide them with information. If you try to accomplish this all at once you are flirting with “information over-load”. The best way to do this is to trickle information their way over time. END_OF_DOCUMENT_TOKEN_TO_BE_REPLACED

Are you using SMART to move your business goals ahead?
by John Frenaye

You are running a (hopefully) successful travel practice. It cannot be done with out goals—right? Promising yourself that you’ll do something is easy; actually doing it can be a lot harder. Most of us tend to have multiple consecutive goals—I want to be wealthy, lose weight, eat healthier, travel more, succeed in business, etc.

While those are all great things to work towards, they are not really very well defined, they are more of an ambition: a statement of intent rather than a concrete objective.

Goals need focus and context, and this is the struggle. Enter the SMART system. END_OF_DOCUMENT_TOKEN_TO_BE_REPLACED