Posted on January 7th, 2016 by Elizabeth Cody in Departures

From modern amenities to colonial aesthetics, Southern Peru has everything you and your group could be looking for. Hike the Inca Trail and taste traditional Peruvian dishes while delving into the culture of the Incas with Central Holidays.

The capital of Peru, Lima was founded in 1535 by Spanish conquistador Francisco Pizarro, who conquered the Incan empire from Emperor Atahualpa. The city has evolved over the centuries into a medley of modern architecture and amenities mingling with classic colonial structures. Lima is considered the gastronomic capital of Peru, with a wide variety of ingredients from the sea, mountain, and rainforest regions, including ceviche and fusion cuisine with Japanese and Chinese influences. 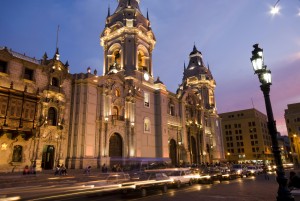 The original heart of Pizarro’s colonial government, the Plaza Mayor in Lima has very little remaining of its former colonial architecture, save for one bronze fountain erected in 1650. The Plaza was one of the sites where the Tribunal of the Spanish Inquisition held court and tried heretics found in the New World. The plaza is surrounded by stunning public buildings, museums, and delightful bars.

One of the most amazing sights in all of Lima is without a doubt the interiors of Casa Aliaga, the former home of one of Pizarro’s followers, Jerónimo de Aliaga, and has been occupied by 16 generations of his descendants. The innocuous exterior hides the true potential of this gem in the heart of Lima. The furnishings and tiles inside the Casa are stunning, with lavish wood, sparkling chandeliers, and exquisite paintings. 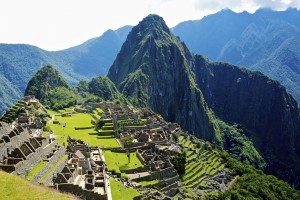 The Sacred Valley region of Peru, also known as the “Sacred Valley of the Incas”, encompasses everything between Calca, Lamay, Písac, and Olleytambo. The valley was formed over years of erosion by the Urubamba River, and is one of the most visited areas of Peru. The Sacred Valley is home to many of Peru’s most famous sights, including magnificent Machu Picchu and enigmatic Cuzco.

In the Sacred Valley is one of the most popular stops along the way to Machu Picchu, the Pisac Ruins and Market. The ruins of this Incan stronghold are second only to Machu Picchu in their glory, with gorgeous citadels, well-preserved temples, and ceremonial baths. One of the most fascinating aspects of the ruins are the agricultural terraces, with stone steps meandering through. 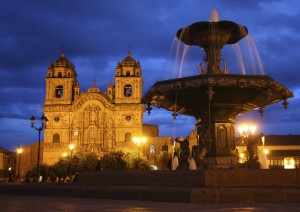 [/media-credit] The city of Cuzco

One of the best-preserved Incan cities is, by far, Machu Picchu. This Incan icon is visited by over 2,500 people daily during the height of tourist season. Many visitors see Machu Picchu as the final destination of one of the most challenging and invigorating hiking trails on the continent, the Inca Trail. The ruins include the Temple of the Sun, Intihuatana, and the Room of the Three Windows. Other features of the reserve include fantastic flora and fauna unique only to this area.

The cosmopolitan city of Cuzco still retains much of its colonial heritage, including a large population of residents who still wear the traditional clothing in lieu of the more modern garments. The night-life is energetic and filled with variety, from pubs to clubs and everything in-between. One of the local specialties of the city, and Peru in general, is roasted guinea pig or “cuy” (although visitors may opt to try it without the head).

For more information on Central Holidays, visit them online at www.centralholidays.com.

Share your thoughts on “Escape To Southern Peru With Central Holidays”