Journey To Mysterious and Spectacular Carthage with Tunisair | TravelResearchOnline

Journey To Mysterious and Spectacular Carthage with Tunisair

Posted on February 23rd, 2016 by Elizabeth Cody in Outposts

For any history scholars or lovers, Carthage holds a special place in history. The birthplace of the fearsome Hannibal, Carthage has been as intricately woven into Roman history as Italy itself. After the Roman and Vandal sackings, the city was left in ruins, but there is still plenty for visitors to see and experience on their next trip to Carthage. The city is also a favorite with cruise ships, with the nearest major harbor only 10 minutes away at the La Goulette Cruise Port. This cruise port is the perfect entryway into stunning Carthage, with plenty of amenities the second you step off the ship on your way into the heart of the city to explore the ruins and history. 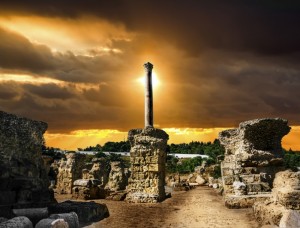 [/media-credit] The ruins of the Antonine Baths at sunset.

Built in the 2nd century, the Antonine Baths were the largest Roman baths outside of Rome itself in antiquity. The baths include the caldarium (hot room), tepidarium (warm room), and frigidarium (cold room), as well as multiple saunas, palestras (wrestling arenas), and gymnasiums. The baths were destroyed in the 5th century by the Vandals, but there are plenty of remains to explore in the city.

Before the Roman invasion, Byrsa Hill was a significant site for the Carthaginians, the home of the temple to their god Eschmoun. When the Romans arrived, they destroyed the temple, leveled off the hill, and installed their own forum and capital on the same grounds. The Roman capital included libraries, judicial buildings, temples, and many piazzas. Ironically, the Roman capital was destroyed after the fall of Rome when building materials were scavenged from the site. One of the best attractions of the ruins is an almost perfectly preserved Punic home, filled with earth during the Roman renovation of the hill that kept the interior intact until it was uncovered. 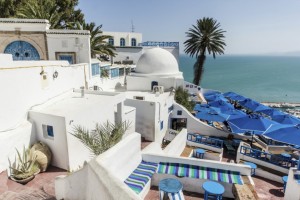 An artists’ community in the heart of Carthage, Sidi Bou Saïd is a dazzling suburb made of a sea of white and blue. Take the time to snap pictures of these gorgeous buildings, as they make stunning souvenirs all on their own. Markets are open all year round, with souvenir stalls open during the height of tourist season, and selling local goods such as bird cages painted to match the blue and white of the buildings. One of the biggest draws of the neighborhood is the Museum Dar el-Annabi, a museum converted from the older home of an 18th century lawyer. A walk through this home will give you a glimpse of the opulence afforded by the wealthy only a few hundred years ago.

Housed in a former French seminary, the Musée de Carthage is home to many unapologetically sensual works of art and mozaics. Exhibits include lamps from the 4th to the 7th century BCE, ostrich shell masks, engraved razors carved onto duck-shaped handles, and stunning sarcophagi. There are two floors for you to explore, and upstairs you can glimpse Roman and Carthaginian weapons, including slings and bullets (football-shaped terracotta or lead projectiles) and read some of the amusing insults inscribed on the bullets before they were thrown at the enemies. 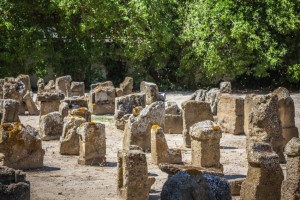 [/media-credit] The Sanctuary of Tophet

The Sanctuary of Tophet was excavated in 1921 by French archaeologists, who discovered these burial grounds were full of the cremated remains of children, suspected victims of ritual sacrifice. Wooden stele, carved posts, stand at attention at each grave, marking the placement of an urn filled with ashes. Over 20,000 urns have been found with the remains of children, from infants to four years old. Animal remains have also been buried here, including lambs and goat kids, indicating that the Carthaginians also sacrificed young animals to appease their gods. The Romans eventually built workshops and other buildings over the site, but if you have a strong constitution, you can still visit the graves today.

For more information on Carthage and Tunisair, visit them online at www.tunisair.com or www.apg-usa.us/tunisair.