Cruise Yourself Slim: New Book, Plus Three Tips For Not Piling On The Pounds When Cruising | TravelResearchOnline

Cruise Yourself Slim: New Book, Plus Three Tips For Not Piling On The Pounds When Cruising

Posted on March 4th, 2016 by Ralph Grizzle in Deck Plans

Late last year, we were lucky enough to get the chance to run a new, large-scale survey of cruise passengers. Surveys come and surveys go, but we’ve done the math, and we can now say for certain that the average person gains 4 pounds on a 10-day cruise, and sometimes a great deal more.

In fact, it’s not unusual for cruise passengers to put on more than 7 pounds, which would mean the 23 million or so people who cruised in 2015, were collectively more than 40,000 tons (yes TONS) heavier when they disembarked than when they boarded. 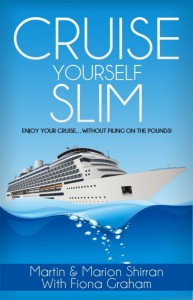 We’re weight management specialists. We run a clinic on the Costa del Sol, where we developed the now much-imitated “Gastric Mind Band,” a psychological approach to weight loss. We are cognitive behavioral therapists, hypnotherapists and have many thousands of hours of one-on-one client time with unhappy overweight clients. We know just how difficult some people find making sensible choices around food.

We’re also avid cruisers. We’ve taken many cruises over the years and have spent hundreds of hours watching and observing our cruise companions in bars and restaurants. We wanted to understand why weight gain in epic amounts seems to happen more to cruisers than any other group of travelers. As cruisers and foodies though, we were well aware that no-one, ourselves included, wanted to be told they couldn’t enjoy themselves and wouldn’t be able to eat any of the sumptuous goodies to be found on cruise ships nowadays.

Eventually, we were able to send a survey to 500,000 past and prospective cruisers. Those survey results form the backbone of our new book, Cruise Yourself Slim. We’ve put together a wide selection of tips and techniques for coming home without piling on the pounds.

To minimize the chances of gaining weight – or realistically, to reduce the amount you put on – we’ve narrowed down three top tips that just about anyone can follow. Use these, and you will return home without piling on the pounds ….

Guest contributors Martin and Marion Shoran are directors of the Elite Clinics in Fuengirola, Spain. Their new book, Cruise Yourself Slim, is available through Amazon, and is out in paperback, Kindle and Audible versions.

Share your thoughts on “Cruise Yourself Slim: New Book, Plus Three Tips For Not Piling On The Pounds When Cruising”