Posted on March 22nd, 2016 by Elizabeth Cody in Outposts

One of the most iconic sights in all of Peru, outside of the mysterious Machu Picchu ruins, are the the tranquil shores of Lake Titicaca. This lake has broken plenty of records in its time and holds some amazing secrets and sights in its waters. The nearby city of Puno is filled with plenty of history, including remnants of its colonial Spanish and British past, and friendly residents, making it well worth a look on your way to visit Lake Titicaca’s waters. Woodbridge International is your ticket to this incredible Peruvian region! 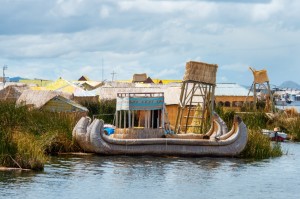 [/media-credit] One of the many islands in Lake Titicaca

The city of Puno is also the capital of the region of Puno, established in the seventeenth century when the Spanish claimed the land for themselves. Over the years the city grew into the agricultural area it is today, with herds of llamas and alpacas grazing on the fields and plains of the region. The city is an intriguing blend of traditional and modern, with its residents in different styles and eras of dress; however, all of Puno’s people are good-natured, and ready and willing to have a good time no matter where they are.

Smaller than what most Western visitors will have experienced from a museum, the Coca Museum focuses on one of Peru’s major exports, the coca plant. This plant is most famous as one of the ingredients, and part of the namesake, of the popular Coca-Cola soft drink. The museum certainly won’t let any visitors forget the plant’s claim to fame, as it proudly displays antique Coca-Cola ads among its different exhibits. One of the highlights of the museum aside from the history and uses of the coca plant are the displays of traditional Peruvian dress, a favorite among museum-goers. 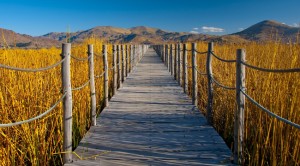 Probably Puno’s most popular landmark and attraction is none other than Lake Titicaca. This lake is the largest in South America by volume and the highest navigable lake in the world at 12,507 feet above sea level. Two countries have joint custody of the saltwater lake, with 60% of the lake in Peru and 40% in Bolivia. The lake sports many islands with their own communities that welcome visitors at many times during the year, and is fertile with many rare and endangered species of animals, including the Titicaca frog which can only be found here.

One of the oldest ships running on steam on Lake Titicaca, the good ship Yavari was converted from a British military ship to a museum and bed-and-breakfast in the heart of Lake Titicaca. Seven times a year the engine is fired up and the ship is taken out on the water, to the delight of visitors everywhere. The knowledgeable crew are always happy to give tours, and with enough notice visitors can see them turn on the steam engine. 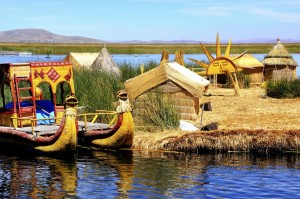 [/media-credit] The Floating Islands of Uros

The most unusual of Lake Titicaca’s islands are The Islands of Uros, which are no ordinary stone and soil islands rooted to the lake bed. These islands float on the surface of the water, constructed from the dried leaves of the tortora plant. This cluster of man-made islands are sturdy enough to support the local population and even build housing on! Activities here include watching the creation of stunning artwork from the same dried tortora leaves that support and shelter the people here, and joining the fisherman on their daily routine of catching fish to feed their families.

For more information on Lake Titicaca and Woodbridge International, visit them online at woodbridgeinternational.com.