Luxuriate in the Minerals of the Dead Sea with Central Holidays

Posted on March 1st, 2016 by Elizabeth Cody in Outposts

Located 400 meters below sea level, the Dead Sea is famous not only for its biblical significance to the Christians and Jewish people, but also for its unique and unusual physical properties. Located off the coast of Jordan and Israel, the Dead Sea has an infamously high level of salt in its waters, leading to the popular pastime of floating on its shimmering waters. 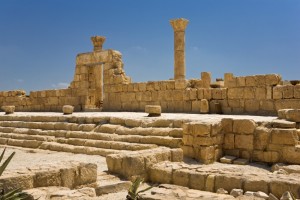 [/media-credit] Ruins at the top of Mount Nebo

One of the biggest draws of the Dead Sea is its high salt content, hovering around the 31.5% range year-round. This is not due to the sea’s low sea level, contrary to popular belief, but in actuality is due to its high evaporation rate. This high salinity rate also makes the waters inhospitable for life for all but the most microscopic of life forms, aside from the floating tourists you’ll see dotting the aqua waters. Be aware, though, that you should always only float on your back; to float on your front is highly dangerous.

Many high-end and luxury resorts have sprung up in the past few decades, and with them the popularity of spa treatments utilizing the salt and mud from the banks of the sea. Treatments often include facials, body, hand, and feet massages, and body wraps. If you’re not looking to indulge in the high price tag that will undoubtedly accompany these services, you could always simply soak in the sea itself. Many visitors also sit on the banks and slather the mud of the sea directly on their skin to absorb the vitamins and minerals in the mud. 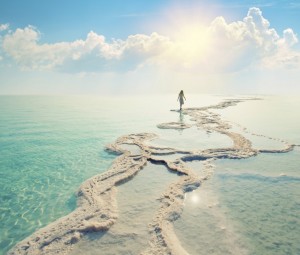 Off the coast of the Dead Sea is Mount Nebo, considered a sacred place in the Bible as the site where Moses first observed the Holy Land, the place which is present-day Jerusalem. The top of the mountain still provides a stunning panoramic view of Jerusalem and is said by Christian and Islamic teachings to be the place where Moses was buried (although another burial site is also located south of Jericho). At the highest point of the mountain are the excavated remains of a Byzantine monastery and church, built in the latter part of the 4th century in commemoration of the place of the death of Moses. The church is well known for its collection of mosaic flooring from different time periods as the church underwent renovations, which can still be seen today.

For those fascinated by mosaics and looking for more, take a trip to the nearby city of Madaba, where many of the buildings and homes still have the original mosaic flooring they were built with hundreds of years ago. Madaba features these intriguing mosaics in many different areas of the city, including its historic churches and archaeological parks. St. George’s Church features a map of the city constructed entirely of mosaic, which features plenty of fascinating information for visitors. Many of the Byzantine churches in the town are perfect for any art history lovers hungry to learn more about these ancient tile works.

For more information on the Dead Sea and Central Holidays, visit them online at www.centralholidays.com.