Find Harmony With The World In The Galapagos Islands | TravelResearchOnline

Find Harmony With The World In The Galapagos Islands

Posted on April 12th, 2016 by Elizabeth Cody in Outposts

The islands made famous by the observations and theories of Charles Darwin, the Galapagos Islands are absolutely teeming with life in both land and sea. The wildlife of these Ecuadorian islands are so accustomed to humans that they barely glance at visitors gawking and flashing pictures. The islands are a certified UNESCO World Heritage Site for their environmental importance and stunning beauty. The islands are also considered to be biosphere reserves, conserved for research and future generations to enjoy. 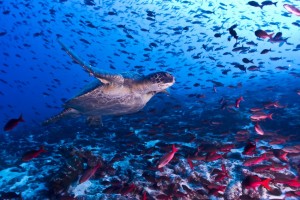 Remnant artifacts of the islands suggest that Incan tribes visited the islands, but the lack of permanent settlements indicates that they never rooted themselves to the islands. The Galapagos were discovered in the 16th century by the fourth Bishop of Panama, Fray Tomás de Berlanga, on his way to Peru to settle a dispute between Governor Francisco Pizarro and his lieutenants. Pirates used the islands for several centuries to escape capture from multiple European governments. In the 19th century, Darwin made his historic voyage to the islands on the HMS Beagle and studied the local wildlife, resulting in the publication of his book “The Origin of Species”.

The local fauna of the Galapagos Islands includes multiple species of birds, reptiles, mammals, and fish, totaling 199 different animal species on this archipelago. The bird species are split into land birds, sea birds, and the islands’ iconic Darwin Finches, of which 13 species reside on the island. Some of the other famous species include the Galapagos penguin, dwarf whales, bottle-nosed dolphins, hoary bats, giant tortoises, sea turtles, fur seals, and flamingos. This is only a small sampling of the expansive wildlife that call the Galapagos Islands home. 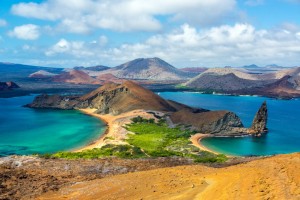 [/media-credit] One of the many Galapagos islands

To research and observe these amazing animals, the Charles Darwin research station was founded in 1959 with the efforts of Belgium, UNESCO, IUN, and an international team of conservationists. The same year the Galapagos National Park was also conceived with the idea of protecting and preserving the unique environment of the Galapagos. One of the biggest challenges for the research station is protecting the native species from the ever-increasing invasive species that have come to the islands as a result of the increase in tourism. They also promote sustainable living, a way of life that creates harmony and balance between humans and their environment to lessen our impact on it. The entire research team of over 200 scientists and volunteers work everyday to learn as much as they can from these creatures and make a difference in the world.

One of the most popular and most visited areas of the islands is the black lava shoreline of Puerto Egas. The black lava has cooled and created lava pools and dips in the shoreline that many animals call home. One of the most fantastic and photo-worthy sights is when the marine iguanas soaking in the sun, or the Sally Lightfoot crabs scuttling, a bright pop of red against the inky black. The shore is named after Dario Egas who formerly ran the only salt mine in Ecuador on the islands.

For more information on CTS Fares, visit them online at ctsfares.com.